Alright folks, I've been mooching off everyone else's contributions to the Rink long enough.  Consider this me dipping my toes in the creative waters.  This is a pretty simple example; nothing profoundly insightful, I don't think.  Look at this as dry run to test a) my skills at this stuff and b) your reception/interest in it.  I've got some much more ambitious ideas in mind but right now I don't have the technological set up to realize those dreams.  Hopefully I'll be set to do it soon, but if there isn't much interest it's all moot anyway, right?  So with that backdrop here's my first attempt at breaking down some Caps hockey.  Also, let's keep one thing in mind: Hockey is not played in still frames.  Keep the live action example in mind and reference it as you must to inform the context of the still shots I provide.

I've picked a play that is familiar to everyone:  An Ovechkin goal.  Unfortunately, I don't have video evidence of the many failures we see (this goes back to my technological deficiencies).  We've all seen AO streak down the wing and get double or triple teamed and either lose the puck or attempt a low-threat shot.  Keep that example in mind, though I regret that I can't give you video evidence as of now (they don't show highlights of thwarted attempts).  I'm trying to demonstrate why it's important that AO enters the zone with his team.  Two recent goals highlight how important it is for AO to have support entering the zone.  Let's take a look at the first example, his 17th goal of the season against Buffalo. Apparently I can only use YouTube videos to embed, but my screen caps are from the NHL.com video.

Here is the link to the NHL.com video.  And here is the YouTube embed (not the same video angle so you should still watch the link, stupid Effing NHL):

The first thing we see when Ovechkin carries the puck into the zone is that the D is stepping right up and not allowing him any room at the top of the zone.  This is normal because no team wants to allow him the space to shoot, even just inside the blueline. 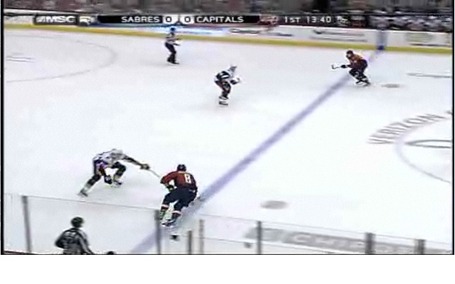 What's important to notice is that the opposite wing is with AO on the rush.  That keeps the opposite D honest, he can't push over toward AO to take away the middle of the ice.  Without the help on the wing we would see: 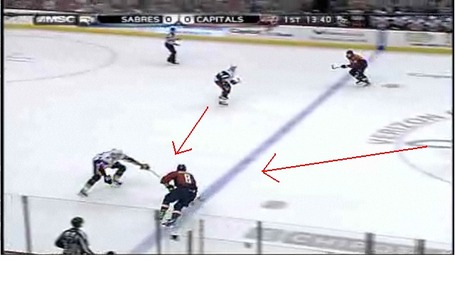 The far D would push toward AO and hold up his progress.  The other red line represents the backchecking C.  Every team uses the backchecking C to put pressure on AO and take away his space so he can't pull up and shoot.  The C will make it into the picture just before AO tries to shoot.  But since the attacking pressure on the far wing keeps the far D away from the middle of the ice, AO is able to attack the middle of the offensive zone. 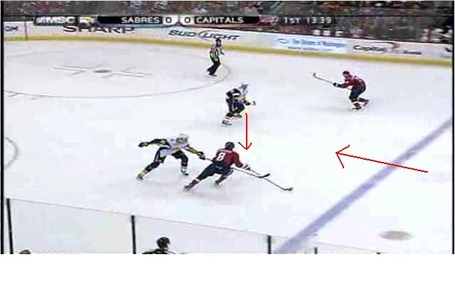 Normally the far D would want to be right up in AO's face by this point.  The C is also a little late on the backcheck, but if the far D could step up on AO right at this point the lack of C help would not be a problem yet. 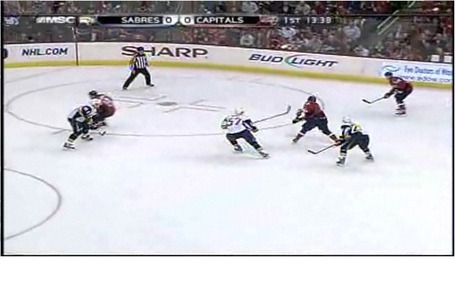 Instead we see the far wing (Flash) drive the net and take the far D with him.  That allows AO to cut all the way down to the top of the far circle. The backchecking C is in the picture now, but AO has gotten far enough down into the offensive zone that he's already shooting the puck.  If the far D holds AO up higher in the zone the C would have made it in time to pressure AO, if AO still had the puck.  Instead AO gets to the top of the faceoff circle and a clean shot on net, the result is a goal.

Now let's look at the second example, the goal from the game @ Montreal.  This is an even better situation than the previous one because Backstrom carries the puck into the zone.  As we'll see, this creates more room for Ovechkin, and an even higher quality scoring chance. Here's the video from NHL.com, and the embed:

Nick Backstrom carries the puck into the zone, allowing AO to trail the play.  The D back in much further for Nick than they would for AO because they aren't as afraid of Nick's shot and because if they commit to Backstrom at the blueline AO has a free path to the net.  They need to back off so they can attempt to defend both players.  Giroux is also in on the rush and does draw attention from the backchecking C, but it doesn't look like the backchecking C would have been able to make a play on Nick and he definitely wouldn't have made a play on AO.  Of course, the D may have played it differently if it was a 2 on 3 instead of a 3 on 3 but the salient factor in this goal is that Backstrom carried the puck and created the space for AO to shoot.  Look at how the D allow Nick to gain the zone: 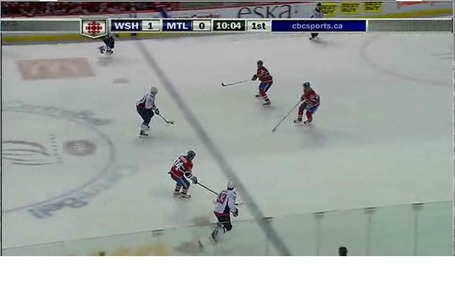 The D back far away from Nick and basically give him the blueline.  Compare that with the goal up above where Tyler Meyers is right in AO's face from the start.  Nick plays this beautifully and drives the middle of the ice forcing both D to respect him.  Driving right would have allowed the D and C to focus on him and let the other D go to AO.  Driving left would bring all the defensive attention in AO's direction, the opposite of Nick's intention.  Nick brings the D to the middle of the high slot and gives AO a soft pass about halfway between the blueline and faceoff circle with no D in a position to do anything about it.  AO, as we know, is absolutely deadly from there. 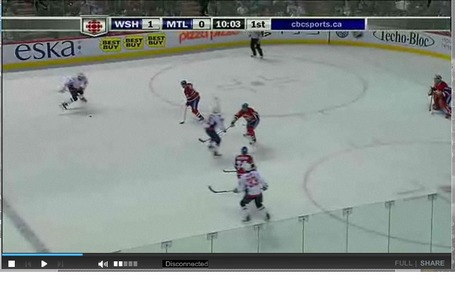 We all know AO is the most dangerous scorer in the league.  We know he can score 1 on 3 or from any other number of seemingly impossible situations.  But that's not enough.  We need him to be at his best.  And he's at his best when he's not 1 on 3.  He doesn't even need to use his teammates, but it helps.  In the first example Flash did nothing but take up space and defensive commitments.  Without Flash driving the net AO never gets to the top of the opposite circle.  In the second example AO lets his teammates do the heavy lifting.  He isn't in the play until he shoots.  Green headmans the puck to Giroux.  Giroux makes his one smart play of the game and gives it to Nick.  Nick attracts the D and lays the puck on a platter for AO.  AO doesn't need this stuff to be dangerous, but this stuff makes him more dangerous.  Also, be warned:  If anyone tries to use my work to throw it back in my face as a reason that AO hurts his team and doesn't play a team game you better be ready for a tornado of teeth and fingernails.  Don't bring that garbage here.  This is about how to make the 2-time reigning MVP more productive and more valuable.  It's not about why he isn't valuable or why he hurts his team, because he doesn't.

Rink Rats, I hope you like it and I await your feedback.