If we have any clues as to how the new Washington Capitals head coach will use his blueliners, they'll be found in his time in Nashville.

Share All sharing options for: Barry Trotz and Defenseman Usage

It's a little amazing just how many quality defensemen plied their trade under Barry Trotz. It's not just Shea Weber and Ryan Suter — it's also Dan Hamhuis, Kimmo Timonen, Marek Zidlicky, and we may soon need to add Roman Josi and Seth Jones to that list, too.

1) Competition—who faces the other team's best players? Who will face third and fourth lines?

2) Zone starts—who will be tasked with regaining possession and moving the puck up the ice?

In terms of age and ability, Washington's blueline actually doesn't look too different from the one currently in Nashville, so Trotz's 2013-14 usage patterns could be a good starting point. There are plenty of capable puck-movers, led by a 28-year-old Norris candidate (former, in the Caps' case) and a young top-pairing defenseman, followed mostly by 25-and-unders.

Trotz has no problem relying heavily on his top blueliners. He frequently turned to Weber and Suter after the departure of Zidlicky and, a couple of seasons later, Hamhuis. With Suter having left for Minnesota, over the last two seasons, Trotz relied on Weber, Josi, and, in 2013-14, even the rookie Jones. That could mean big, big minutes for John Carlson — the closest thing the Capitals have to a Weber-, Suter-, or Hamhuis-type strong two-way defenseman.

I expect Mike Green (assuming he's still here, of course) and Karl Alzner will get lots of ice time, too, but Trotz may regard them differently. Green was (and maybe still is) a rare breed of defenseman who could put himself into the Norris Trophy conversation exclusively with his offense, a type of player Trotz didn't come across in Nashville. Alzner, on the other hand, isn't quite as adept moving the puck as Suter, Hamhuis, or Weber, and so may not get big minutes if he's not paired with Carlson. 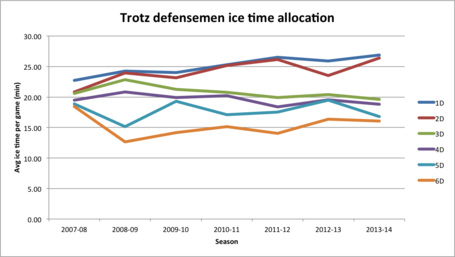 For Trotz, it doesn't look like this reliance was borne out of a personal preference for a certain type of player. There's no obvious common thread between the players Trotz has favored over the last few years—a group that includes the four aforementioned players, plus Kevin Klein, Francis Bouillon, and Greg Zanon. Instead, there's a mix of players short and tall, physical and positional, capable and incapable puck-movers, and even players not exactly renowned for defensive-zone play (albeit with relatively heavy offensive-zone deployment).

Another motion chart. Individual bubbles are ES TOI/G rank on team, min half of season played (i.e. one bubble is the team's top defensemen, another is the No. 2, all the way to No. 6). I recommend you check a box in the bottom-right to follow one bubble at a time. X-axis denotes the time-on-ice-based quality of competition of opposing forwards. Y-axis is offensive zone start percentage, per Behind the Net. Bubble color is relative Corsi, per Behind the Net—the redder, the better. Bubble size is even-strength ice time per game, per NHL.com. Raw data here if you want a peek.

Instead, it seems like Trotz became so reliant on his top defensemen out of necessity. When he still had Hamhuis and Suter, he could construct a reliable second pairing, but over the years, as veterans moved out in favor of youth—by the end of the 2013-14 season, Weber was the only regular defenseman above the age of 25—and marginal NHLers, the Predators' depth defensemen increasingly became liabilities. (Click the 4D and 5D boxes in the bottom-right corner and see how the bubbles become bluer, indicating a decrease in relative Corsi rating. You'll also notice that, by the end, the 1D and 2D are taking much tougher zone starts than the rest of the blueline.) That's how Nashville ended up with all six of its defensemen playing between 18:30 and 23 minutes a game in the 2008 playoffs, but a top pair logging nearly 30 minutes and bottom pair under 10 minutes a night four postseasons later.

That's actually not too different from what the Caps have had since 2007-08.

The team has generally had three or four competent blueliners, plus one or two that get hammered in the possession game. While Bruce Boudreau, Dale Hunter, and Adam Oates were happy to leave their depth defensemen underwater to give Mike Green and his defense partner zone starts and competition conducive to offense, that may change under Trotz, who tended to give his depth a chance to succeed at the expense of his top blueliners.

So, unless Orlov and the rest of the Caps defensemen beyond Carlson, Alzner, and Green are much better than they're given credit for, we'll likely see usage more like in this second graph—Nashville, 2013-14, borne out of necessity (and also the the season Trotz apparently began paying closer attention to analytics)—than the first, 2007-08, when Nashville had more depth: 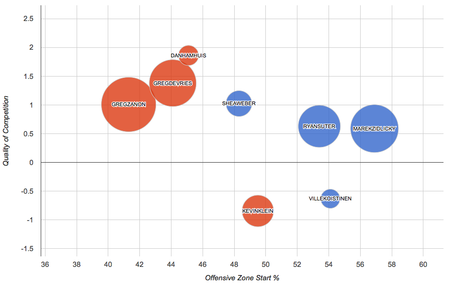 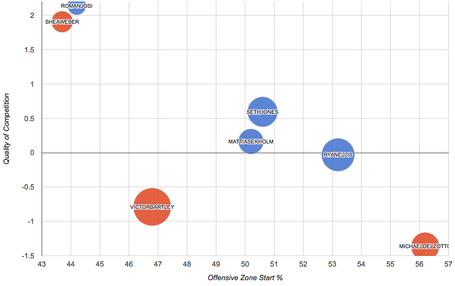 Via Some Kind of Ninja; bubble size is relative Corsi, with blue positive and red negative. Click to see a larger version.

If I had to guess, I'd peg Carlson and either a future acquisition or Alzner as the players to end up in the top-left corner. Green probably ends up in the middle somewhere, with decent competition and zone starts. Orlov could end up with Green in the middle, off to the side a little with favorable zone starts (like Ryan Ellis), or well off in the "sheltered" corner, like Michael Del Zotto.

Whatever Trotz and his yet-to-be-named staff decide, their handling of the organization's long-term Achilles heel will likely go a long way toward determining how this team ultimately performs. There are some good pieces, but they may have to be assembled in an non-traditional way for the blueline to, for the first time in years, be a true strength.

(Tomorrow we'll look at "the big question" we noted above, along with the rest of the forwards.)