When George McPhee inked Joel Ward to a four-year, $12-million deal two summers ago, the Caps general manager readily admitted that he overpaid for the rugged winger by about 15 percent... but that comes with the free-agent-frenzy territory, even when it's bottom-six forwards being targeted, and especially when they're coming off impressive playoff performances.

Ward's first season in D.C. was difficult, as he only managed a half-dozen goals in 73 games playing a reduced role under Dale Hunter and it looked as if his would be one of those contracts the Caps would regret for years to come (of course, his Game 7 overtime goal against the Bruins provided the Caps with three more home playoff games, which nearly justified the first year of the deal on its own). But his second season was much better, as he played and scored more, equaling his 2012-13 goal total in his first 19 games, and equaling his point total from the previous campaign in 36 (i.e. less than half as many) games.

How Grabovski Fits In On The Caps 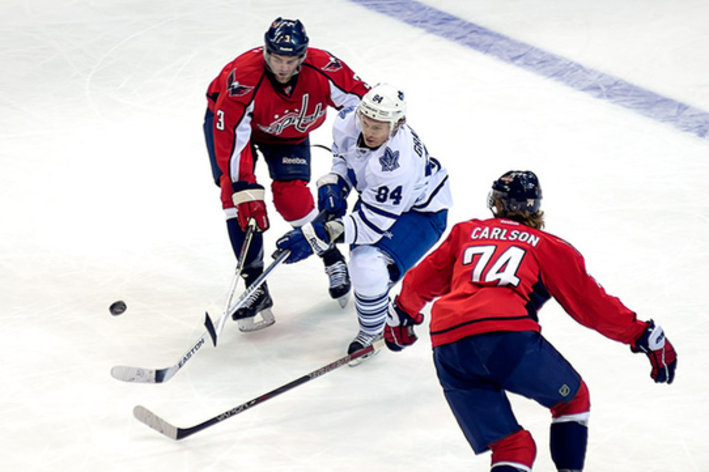 When George McPhee signed Mikhail Grabovski to a one-year, $3-million deal last week, the consensus in most hockey circles was that the Caps got a short-term bargain... but that comes with the wait-out-the-market territory, even when it's top-six forwards being targeted, and especially when they're European coming off down years.

And while Joel Ward was enjoying a bounce-back 2013, Grabovski was, well, not enjoying much of anything at all. It's well-documented how the skilled pivot found himself buried on Randy Carlyle's depth chart behind Tyler Bozak and Nazem Kadri, and how his production suffered accordingly, but prior to that curious usage Grabovski had firmly established himself as a consistent secondary producer, averaging 23 goals and 30 assists per 82 games over the previous four seasons.

Interestingly enough, Grabovski's worst point total over an 82-game season is the same as Ward's best - 35... and Ward played 20 more games in his 35-point campaign than Grabovski did in his. In 2010-11, Grabovski had as many goals (and assists) as Ward had points. Based on box cars (and both of these players are more than their most basic stats), it's somewhat difficult to believe that these two players will get identical biweekly paychecks in 2013-14, but here we are.

And what does the market say? Via CapGeek, here are Ward's and Grabovski's 20-closest cap comparable forwards (click to enlarge): 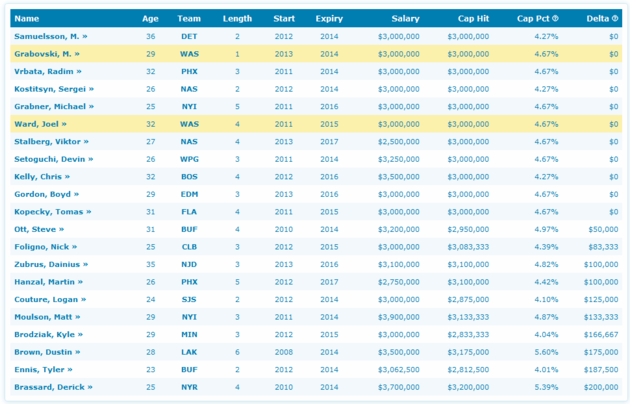 That's a solid list of complementary players (though it's worth noting that a couple, Logan Couture and Dustin Brown, have already signed extensions that will roughly double their current cap hits). And it's also worth noting, as we always do, that each of these deals is different, and variables such as restricted versus unrestricted free agency, terms versus dollars and the years in which the respective deals were consummated make them difficult to fairly compare. That's a particularly important point here when talking about Grabovski. He'll make the same amount as, say, Boyd Gordon this year. But Gordon is signed at $3-million for each of the two following seasons as well, while Grabovski is hoping to hit the same homerun that Mike Ribeiro hit after a year playing under Adam Oates and with Alex Ovechkin (four years, $22-million, in case you forgot what Phoenix gave Ribeiro). Chances are pretty good that over the next three years, Grabovski will be closer to Ribeiro's salary range (or fellow 2013 free agent centers Bozak's or Stephen Weiss's or Valtteri Filppula's) than Gordon's for two of them. But that's neither here nor there at this moment.

Anyway, that's a list of forwards that will carry with them cap hits around $3 million for 2013-14. How do Ward and Grabovski stack up? Let's throw in their usage alongside cap-hit comparables and then take a look (via Hockey Abstract): 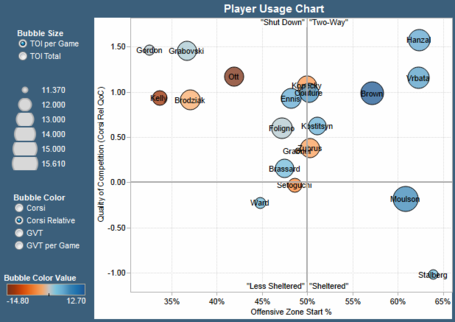 There's a pretty good range here, from tough-minute shutdown guys to more offensive-minded players getting fed easier minutes, and what's particularly noteworthy in Grabovski's case is that despite being arguably miscast as the former, he still beat those minutes. Know how many forwards played 20 or more games last season, averaged at least 12 minutes per night, had an offensive zone start percentage (this version of the metric) below 40% and still managed a positive Relative Corsi? Three: Grabovski, Mike Fisher and David Moss.

As for Ward, one thing you'll notice about the list is that the guys on it are, by and large, either third-line/shutdown centers or top-six wings - $3 million is an awful lot to be paying a solidly bottom-six wing in 2013-14... but again, here we are. On the plus side, where we are is with the Caps having as solid a bottom-six forward corps as there is in the East, with a handful of players, including Ward, who can play up a line if needed.

Mikhail Grabovski fell into the Caps' lap last week in much the same way that Tomas Vokoun did two summers ago - a veteran looking for a one-year deal in a favorable situation to use as a springboard to a more lucrative long-term pact the following summer. It didn't work out for Vokoun, but it should for Grabovski, who will almost certainly outperform his deal. He's motivated, "[w]orks very hard, cares about winning and improving as an individual," and is "tough ... and absolutely fearless." He also happens to be very good.

Joel Ward is what Joel Ward is - somewhat overpaid, but a fine third-liner and exceptional fourth-liner, and his salary is a sunk cost at this point - there's no reason to play him somewhere other than where he helps the team the most just because of his salary. He won't likely outproduce many fellow $3-million men, but at least when he's not producing, he's not likely hurting the team because he does other things that don't show up on the score sheet well.

On any roster, there are going to be steals and busts and far more deals that fall somewhere in between. Joel Ward is one of those 'tweeners, but probably on the wrong side of even. Mikhail Grabovski, on the other hand, has the potential to be quite the heist.