From Alzner to Ward, we're taking a look at and grading the 2013 season for every player who laced 'em up for the Caps for a significant number of games during the campaign, with an eye towards 2013-14. Finally... Joel Ward. 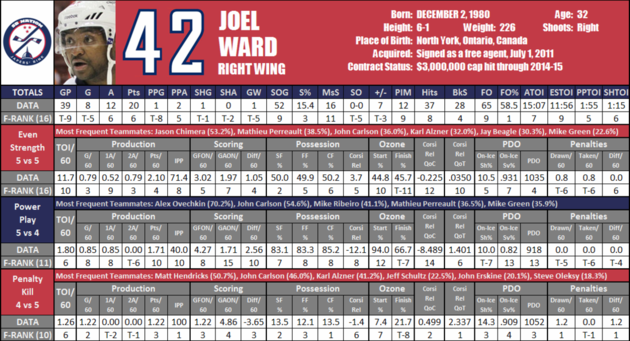 Ward and his most frequent linemates: 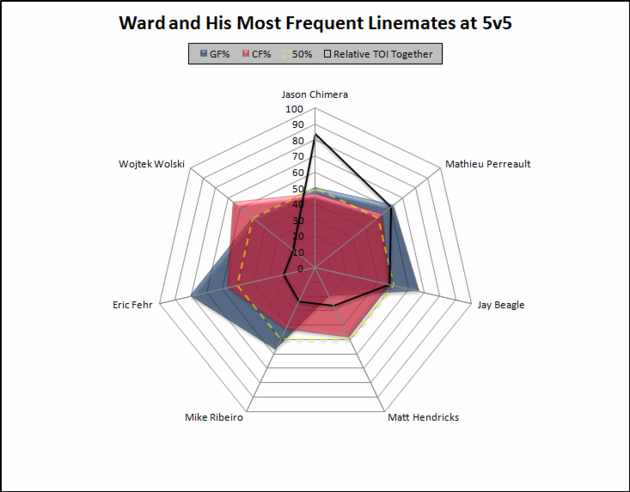 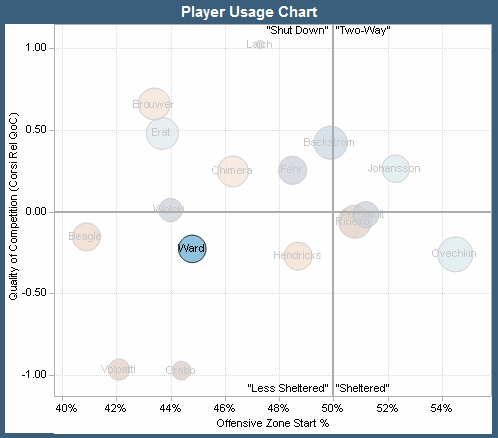 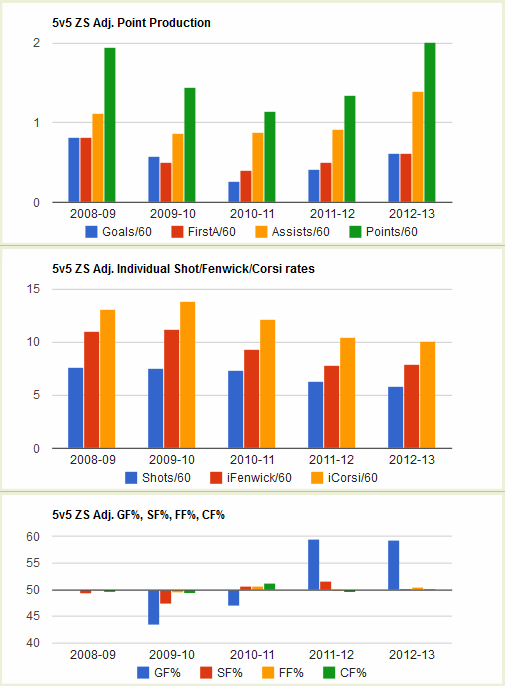 Key Stat: Ward's 20 points in 39 regular season games gave him a points-per-game rate of 0.51, a career-high (but still below his 0.66 points-per-game career average in the playoffs).

Interesting Stat: Ward scored eight goals on 52 shots for a shooting percentage of 15.4 in the regular season, good enough for third-highest on the team.

The Good: After a disappointing 2011-12 regular season (at least as far as offense and usage was concerned), Ward stepped up his production this year and actually surpassed his goal and point totals from the previous season, despite the fact that he played in 34 fewer games (thanks to both the lockout and injury). His strong play and production, particularly early on, was a big reason for the success of the third line and helped provide an offensive boost to a team that was still waiting for its primary scorers to find their rhythm.

Ward began the season on a tear, producing 11 points in the season’s first month - including four multi-point performances - and picked up his first multi-goal game since May 2011 (and first regular season multi-goal game since December 2008) in the season opener against Tampa. His early season shooting percentage of 21.7% proved to be unsustainable, eventually dropping to 15.4%, but it was still a career-high and the first time since 2008-09 (and only the second time in his career) that he was able to crack 10%. While his offense dropped off a bit by the end of the regular season, he finished the year with the third-highest goals- and points-per-60 at even strength among Caps' forwards.

Ward was also one of only three Capitals (joining Troy Brouwer and Eric Fehr) to register both a shorthanded and power play goal this season. His ice time on special teams limited under Bruce Boudreau and Dale Hunter last year, this season he logged over a minute a night on the penalty kill and close to two minutes on the power play.

Of course, as good as his regular season was, Ward continued to live up to his reputation as a playoff performer in the first-round series against New York, with four points (including a power play goal) in the first five games to tie for the team scoring lead.

The Bad: Although he started strong, Ward's hot hand gradually cooled and he struggled to find consistency after the first month of the season; five of his eight goals were scored in the season's first three weeks, and from early February on he picked up just nine points in 24 games. His regular season was cut short in early April when a Sami Salo slapshot to the knee took him out of a game and caused him to miss the final nine games of the year.

He was able to return in time for the playoffs, and seemed no worse for wear, but he had just one goal in the series (albeit an important one which forced overtime in Game 5) and his four postseason points matched a career low set back in 2010. Part of that was due to his low shot total, firing just eight shots on net in the seven-game series - the fourth-lowest shot total of any Caps forward. He also took three minor penalties in the series, including a high-sticking call in Game 3 (too soon, Joel) that led to a game-tying, pseudo-power play goal by Brian Boyle.

The Discussion: Ward logged substantial power play time this season for the Caps - is there room for him on the first power play unit next year? Is he best suited for a third-/fourth-line role or could he potentially fill a spot in the top-six forwards? Finally, what would it take for him to earn a ‘10’ next year?