Share All sharing options for: The Metropolitan Division's Top 10 Centers: 2013-14

As the season draws ever closer, we continue our countdown of the top ten players in the Metropolitan Division - after tackling goalies, defensemen, and wingers left and right - with the guys up the middle, the centers. And away we go...

Over the course of his seven-year career, Zajac has been a fairly consistent point-producer and solid two-way forward - albeit one who perhaps has been a bit overshadowed by some of his more illustrious teammates, guys like Martin Brodeur or Zach Parise or Ilya Kovalchuk. He's a penalty-killing machine (and a pretty good one, at that), a great faceoff man and the Devils' fourth-highest scorer last season... although he might move up this year, considering that two of the guys ahead of him have hit the road. Zajac had a bit of a down season in 2013 (some of which was out of his control, as his team wasn't exactly lighting it up while he was on the ice) but he'll get some added help with the Devils' retooled offense this season and could very easily get back to the 20-25 goal scorer he's been in the past.

After fourteen seasons (and a Stanley Cup ring) with the Lightning, Lecavalier found himself the victim of one of Tampa Bay's compliance buyouts this summer... and promptly headed to a team that had already burned both of theirs. Lecavalier's slowed down a bit since his high-flying days alongside Martin St. Louis, and at 33, his best years are almost certainly behind him, but he's still an upgrade for the Flyers over 35-year-old pint-sized pivot Danny Briere and is more than capable of providing consistent secondary scoring on a stacked Philadelphia forward lineup. And lest we all forget, Lecavalier certainly likes playing the Caps - he's got 70 points in 77 career games against DC, third-most against any team and the fourth-highest points-per-game rate against any of the Eastern Conference teams.

The newest member of the Washington Capitals (and one of the more eagerly anticipated in recent history) brings a pretty impressive resume with him to DC, despite a season of misuse in Toronto. Grabovski has the ability to play well against tough competition, to shore up the second line's possession numbers and could provide the Caps with a legitimate second line scoring threat that has been lacking in recent years. The deal he signed (and was eventually bought out of) with Toronto was perhaps too much for the Belarussian center, but the one-year contract he inked with the Caps earlier this summer was a bargain price for what he is and could be for this team... especially since he's got a chip on his shoulder and plenty to prove.

Easily one of the more underrated centers in the NHL, 23-year-old Stepan has seen his numbers go up in each of his first three seasons and took over as the Rangers' top center in the 2013 season. The 44 points he put up last season didn't just lead the team; they also fell just seven points shy of the career high he set a season before, in a full 82-game slate. Granted, those 44 points came on the back of what was likely a somewhat inflated shooting percentage (and his performance in the playoffs overall has been somewhat underwhelming), but Stepan has good wheels and the ability to be a strong, shutdown forward with offensive upside for the Rangers. If he re-signs with them, of course.

The eldest of the infamous Staal brothers out of Thunder Bay, Eric Staal is also the most familiar of the foursome to Caps fans as he heads into his ninth season not only with the Hurricanes but as a division rival for the Caps. Still only 28 years old, Staal has put up at least 70 points in eight straight seasons and demolished his usual points-per-game pace during the lockout-shortened campaign in 2013 - all while centering the 'Canes top line, which regularly pitted him against the top defensemen his opponents had. He'll enter the 2013-14 season coming off of a knee injury, but should be ready in time to take his now-familiar spot between Alexander Semin and Jiri Tlusty on Carolina's potent top line for opening night.

The fact that Giroux put up a point per game in the 2013 season and was still considered to have had a somewhat down year just speaks to his ability as one of the NHL's top centers (even if he's not the best player in the world... sorry, Peter Laviolette). Giroux saw his shooting percentage dip slightly last season but overall has seen his production steadily increase over the course of his career despite playing tough minutes for the Flyers. The manliest golf injury ever sidetracked his offseason a bit (and didn't exactly endear him to the Team Canada brass) but a healthy Giroux with a slightly scarier offensive supporting cast remains one of the Division's biggest offensive threats.

Backstrom, like Alex Ovechkin (and the entire Capitals team) started the 2013 season at a sluggish, unimpressive pace... and like Ovechkin (and the entire team), rebounded with a red-hot second half that helped fuel the Caps' late playoff push. Even with the injuries and slumps in recent years, Backstrom has continued to produce at about a point-per-game pace over the course of his career, and as Adam Oates continues to work his magic on the Caps over a full season, there's hope that he can return to the form that helped him put up 101 points in a single season. Even with the slight dip in production, he's moved into 14th all-time among Caps in points - and passed his current coach for 10th in assists, as well. Not bad for a guy who won't be 26 for another two-and-a-half months, right? Now we just need to work on that pesky playoff performance...

Tavares has played somewhat in the shadow of previous first overall picks like Sidney Crosby and Alex Ovechkin (to say nothing of playing on a routinely overlooked team like the Islanders) but has already put together quite a career for himself in his four NHL seasons. The 2013 season was easily his best, particularly in the first half, as he turned a 47-point campaign into a nod as a Hart Trophy finalist and helped drive the Islanders to their first playoff spot in six years. He was certainly MVP-worthy (if you use the real definition of the term, of course) as a third of New York's 94 goals even strength goals, and over half of their power play goals, were either scored or assisted by Tavares. Slightly inflated shooting percentage aside, Tavares finished last season with more goals, points, power play goals, power play points, game-winning goals and overtime points than anyone else on his team - just the status quo for the soon-to-be captain of the Islanders.

A down year shortened by injuries doesn't change the fact that there aren't many players who are more electric than Evgeni Malkin when he's on his game. With a big body and tremendous skill, Malkin gives the Penguins a lethal one-two punch up the middle and is a major reason not only for the Penguins' overall offensive production but also for the production of his linemates. Malkin has had some injury issues since breaking into the League in 2005-06, but his goals-per-game rate is tied for fifth-highest since his rookie season... to say nothing of some pretty nice company when it comes to points-per-game. Of course, playing on the second line allows him to be slightly more sheltered than others, but it also makes it a tough choice for defending teams. Take your pick, do you cover Malkin, or do you cover...

...this guy? Yeah. No suspense here and no question about who should top this list, because there's just no one better among centers (and right now, among all players) in the Division or the NHL than Crosby. Speaking of points-per-game wizards, Crosby leads all active players in that department since his rookie season and is third in total points during that span... despite playing just 470 games. And that's really the only flaw in Crosby's game right now. Because when he's healthy, there's no one better - but he's already missed 152 games with various injuries (most notably the concussion-related type that have plagued him since the Winter Classic), including 12 games last season. Despite all of that he has produced at a staggering pace, most recently putting up an insane 56 points in 36 games before being felled by a jaw injury towards the end of the year. If there's a silver lining to having to play the Penguins on a more frequent basis this season, it's that Caps fans get to watch a generational talent face off against their own generational talent. Which is worth the price of admission any day.

Below, a quick look at how each of the players on this list (including the honorable mentions) were used in the 2012-13 season*: 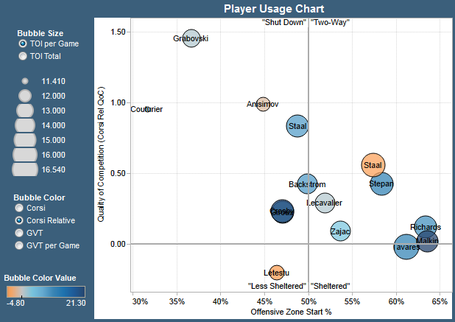 *Note: the Staal in the northwest quadrant is Jordan, while Crosby and Giroux were used in such similar fashions this year that their bubbles overlap...