Continuing our look at the Metropolitan Division's top 10 at each position, as we move to the right side...

We've looked at the goalies, counted down the defensemen, examined the left wing... now we continue our position-by-position breakdown of the Metropolitan division with the top ten right wingers.

One of the League's speedier players, Grabner seems to have found a home in Long Island after being jettisoned by the Canucks early in his career. The Austria native put up 16 goals in the shortened 2013 campaign - just four shy of his mark from the previous season - and finished with the highest goals-per-60 rate at even strength of anyone on his team (including Hart Trophy finalist John Tavares). With just parts of four seasons under his belt and a pretty wide disparity in point totals over that span, it's hard to tell where the 26-year-old's true talents lie, but with his speed and skill he can be a dangerous opponent on any given night.

Ah, Jagr. We know him well... and by now, so does the rest of the Patrick Atlantic Metropolitan Division, as he's played for just about everyone over the course of his twenty-three seasons. His next - and perhaps final - stop will be in Newark, as the 41-year-old signed on with the Devils (and helped make them the League's oldest team). He may have slowed down a bit, but there's no question that the talent is still there for Jagr, particularly with the extra man - Jagr's 6 power play goals led the Stars long after he departed Dallas, and his 3.66 points/60 on the power play led the Bruins (at least those who actually played on the power play). There are obviously mixed feelings about Jagr here in DC but no one can deny the talent, even at his advanced age; if this is his last season, it'll truly be the end of a great career.

His production may have dipped slightly in the lockout-shortened season, but Simmonds still finished the year with the third-highest point total on the Flyers with 32 points (and the third-highest point total of his career). He also racked up over three minutes of power play time a night and made the most of it, with 16 power play points for his team's second-best points-per-60 rate, and 15th-best League-wide. He's been part of the Flyers' fairly lethal top-six since arriving in Philly two years ago... and considering who his linemate might be come October, that will likely continue well into the 2013-14 season.

Horton's signing by Columbus was easily one of the bigger free agency splashes made around the NHL this summer (y'know, until this one), as the new look Blue Jackets locked him up for a hefty seven-year deal. Of course, with a long-term, big-money deal like the one Horton signed comes equally hefty expectations, and Horton will have to prove that he can be more than just a complementary player. He's been a 25-30 goal guy throughout his career, and with his skill (and in this division) he should be able to continue that trend with his new team.

Speaking of skill, there's no question that Gaborik has loads of it. He didn't always show it during his time in New York (although he still managed to put up pretty decent numbers), but Gaborik seemed rejuvenated after being set free from John Tortorella and put up eight points in twelve games with his new team as they put together a last-minute playoff push. He's seen fairly sheltered minutes in recent years, if there is such a thing as someone who plays 18-20 minutes a night, but he's a dangerous sniper capable of putting up 40 goals - and helping a Columbus team whose offense has languished at the bottom of the League in recent years.

If Marian Gaborik was being stifled by the Rangers, Callahan has thrived with them over the last few years. New York's captain has established himself as a hard-working leader who, while not a threat for the Richard Trophy, still puts up pretty decent offensive totals from year to year. He led Rangers' forwards in ice time each of the last two years, and is something of a jack-of-all trades on special teams, skating big minutes on both the penalty kill and power play (and putting up points on both). Offseason shoulder surgery has put his readiness for the start of the season into question - but what isn't in doubt is his importance to his team.

If his team had something of a down-year in 2013, Voracek had the opposite, breaking out in a big way with a career-high 22 goals in just 48 games. His eight power play goals doubled his previous career high, and the 17 power play points he accumulated also beat out his career high by four (both set back in 2009-10). Voracek certainly benefited from a bump in ice time (as well as the fact that he shared a line with Claude Giroux), and his 17.1 shooting percentage is certainly due for a bit of regression considering he'd never topped 11% in his career, but he proved last season that he deserved to be taken seriously as an offensive threat and should be one to watch this year.

Caps' fans are plenty familiar with the mixed bag that is Alex Semin - the other-worldly skill combined with a sometimes frustrating penchant for what can be perceived as laziness or a nonchalant playing style. As an opponent, however, it's the former that should be of the most concern. Semin seems to have found a good home in Carolina (one would hope, since they locked him up for another five years at $7 million per year) and has thrived on the Hurricanes' top line alongside Eric Staal and Jiri Tlusty. During the 2013 season Semin set a scorching point-per-game pace (including four points in five games against his former squad), although he did cool off somewhat in the second half of the season, and should be expected to be a threat in the coming years as well.

After a slow start to his career as a Penguin, Neal has taken off, scoring 40 goals in 80 games during his first full season and following it up with 21-in-40 last year... because the Penguins so desperately needed help in the offense department. Some of that has been a result of playing alongside a supremely talented center in Evgeni Malkin, but Neal has shown a pretty slick scoring ability that was hinted at but never fully realized during his time in Dallas. As a part of Pittsburgh's often lethal power play he's feasted on opponents to the tune of 27 power play goals over the last two seasons, almost half of his total production. That impressive total is third-best in the League over the last two years, behind only Steven Stamkos and...

...this guy, who needs no introduction. The 2013 season was an interesting one for the three-time Hart Trophy winner, as he - like his team - went through a rough start only to set a torrid pace down the stretch. Ovechkin's 32 goals last season would be a roughly 55-goal pace over the course of a full season (although granted, it's unlikely he would have been able to maintain such a pace over 82 games). Regardless, it was a tremendous performance and one for which the Caps owe their Southeast Division title and their spot in the playoffs - and hopefully just a preview of what Caps fans can expect from an Adam Oates-coached Ovechkin.

Below, a look at how each of our ranked players (along with the honorable mentions) was used last season: 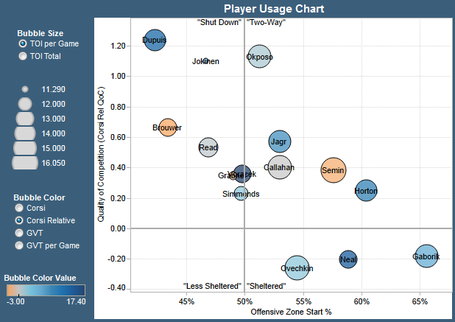