Shuffling the Deck: Eric Fehr, Martin Erat and the Caps at Even Strength

Share All sharing options for: Shuffling the Deck: Eric Fehr, Martin Erat and the Caps at Even Strength

One week into the 2013-14 season, two somewhat surprising areas of concern have cropped up for Caps fans as they've watched their team stumble out of the gate with a 1-2-0 record (which could easily be 0-3-0 if the Flames could hold a three-goal lead), namely the team's play at even strength and the deployment of Martin Erat.

On the former point, the Caps have been outscored 10-3 at evens (8-3 if you toss out the empty-netter in Chicago and Calgary's four-on-four tally), and have only registered 47% of the shots taken at five-a-side in their games (44% when the games have been close). They have one even strength goal from the second, third and fourth lines combined. Their shooting percentage is abysmal and so is their save percentage. Granted, both of these will almost certainly regress over time, but even when they do, if they don't start controlling the game a bit more at even strength, the picture's not going to get a whole heck of a lot better.

On the latter point - Erat's ice time - the eight-time 49-plus-point-getter for whom the Caps traded away one of their few bluechip prospects just last spring has been relegated to the fourth line and has averaged eight minutes of ice per night. Those are Johan Larsson minutes. (Who? Exactly.) Erat's utilization is mystifying at best and infuriating at worst, given his price tag (both in terms of the asset moved to acquire him and the $4.5-million cap hit that could surely have helped the team acquire a desperately needed fourth top-four defenseman) and the team's apparent needs. So take your pick - is Erat not good enough to play in the Caps' top-nine (and thus a pretty terrible acquisition in retrospect) or is he being misutilized (and thus evidence of a questionable - but not entirely new - line of thinking from Adam Oates)?

It's too early to answer that question, but it might not be too late to answer another, one that ties in with the two issues identified above - namely, "Is it time to end the Eric Fehr-as-a-center experiment?"

Oates raised eyebrows at the outset of camp when he had Fehr (and, coincidentally enough, Erat) taking reps at center. Reps turned to shifts which turned to games and preseason turned to regular season and Fehr was still there, lining up in between Joel Ward and Jason Chimera on the Caps' third line. In fact, the experiment (Oates's word) was so successful in the preseason that Fehr tied for the League's preseason scoring lead (eight points in five games) and the team traded away a much more proven player that seemed perfectly suited for that third pivot role in Mathieu Perreault.

That success hasn't carried over to the regular season, however, as Fehr has yet to pick up a point, has the third-worst Fenwick percentage on the team, and sports a League-worst minus-six rating (his zone starts haven't been favorable, but neither have they been particularly crippling, and, to be sure, his line has been victimized by shaky goaltending behind it). More importantly, Fehr appears to be having difficulty in his own zone, which isn't surprising - it's incredibly difficult to learn the position on the fly, and a center's defensive responsibilities are crucial to success (why do you think the Selke winner is almost always a center?) - and he doesn't necessarily have the quickness to recover when he's out of position. For example...

[Ed note: Those GIFs comes to us via B. Sheridan, who's going to be contributing such things throughout the season. Give him a follow on Twitter @capitalshill.] 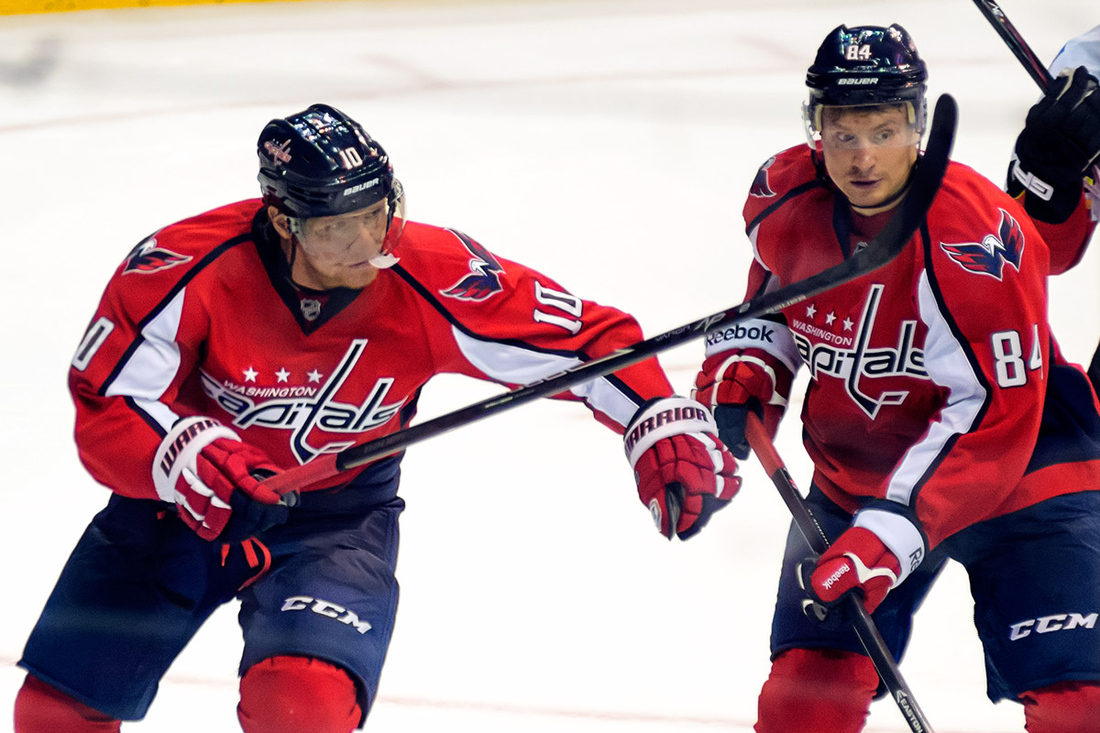 Of course, it's worth pointing out that after three games "Alex Ovechkin-as-a-right-wing" didn't look so hot either, and we all know how that turned out (though there's more reason to believe that an elite winger can successfully flip from one side to the other than to think an average wing can move to the middle and make it work). But for the impatient among us - and, to be clear, Adam Oates doesn't appear to be in that group - there's an obvious way to address the team's even-strength play, Erat's ice time, and Fehr's inadequacy (for the moment) down the middle: shift Fehr back to the wing (on either the third or fourth line), Erat to the second-line left wing, and Brooks Laich (off to a slow start himself, hindered by his hip flexor injury and rust, perhaps) to the third-line center slot. That would give the second-line a better playmaker alongside Mikhail Grabovski and Troy Brouwer, the third-line a better center (and a formerly effective shutdown line), and the Caps a better top-nine with Erat getting the minutes that, frankly, he's proven he can handle and deserves.

And with that fixed, the team can turn its attention to the defensemen and goaltenders. It's always something, ain't it?