The Washington Capitals struggles at even strength led to an early playoff exit last season, and through three games they have not improved. We'll try to identify the worst culprits in the forward ranks.

Share All sharing options for: Isolating The Capitals' Even-Strength Problems

When George McPhee went out and replaced the departed Mike Ribeiro with freshly bought-out Mikhail Grabovski, the Washington Capitals made a huge improvement at even strength, and especially on the second line. Or so it appeared on paper, where the trickle-down effect at pivot would have much the same impact on the bottom two lines. Through three games the desired results have yet to be realized.

Given that Chicago was one of the best even strength teams in the league last season, and that Washington's even strength deficiencies were masked not only by their torrid power play, but by a top-10 even strength shooting percentage, the underlying numbers (presented graphically below) from the season opener were promising. 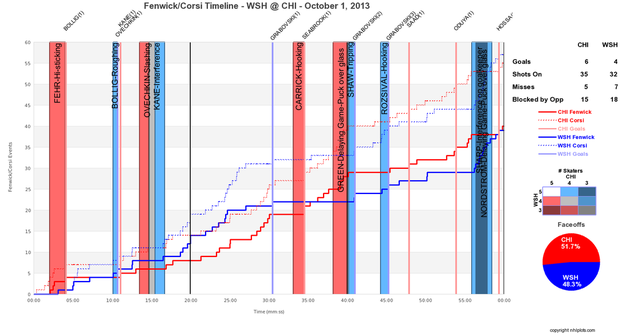 As you can see in the above graph, the Capitals basically went toe-to-toe with the Blackhawks in terms of Corsi and Fenwick. The flat lines you see are periods of non-production, and are certainly unsightly, and the Caps final possession numbers were boosted by a late flurry on the end-of-game 5-on-3, but it was still a decent showing against a serious measuring-stick opponent.

Two games later, the initial glimpse at what might have been a revitalized attack at evens has not come to fruition. In fact, of the five goals the Caps have fired home since opening night, three of them have come on the power play, and the team still does not have an even strength tally from a forward not named Alex Ovechkin or Grabovski. Dating back to Game 6 of last year's Eastern Conference Quarterfinal series against the New York Rangers, the Capitals have been outscored 16-3 at evens. 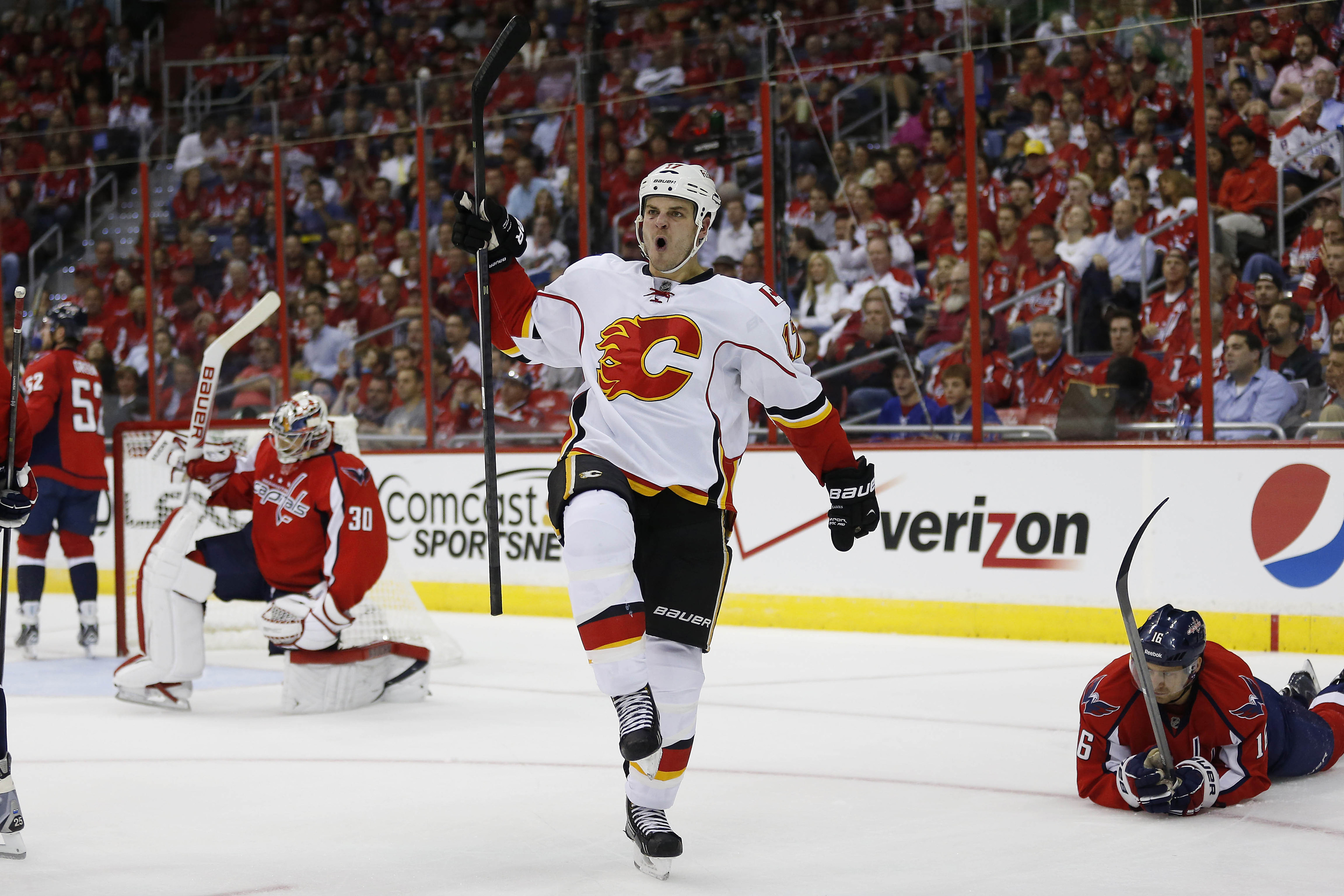 So what gives? Well, the easy answer is that they've been unlucky. Through three games the Caps have the fifth-worst shooting percentage in the NHL, and the action in the other net hasn't been much better, as they lug around the seventh-worst save percentage. The counterargument to "luck" is that the opposition has played much better in net, and what's that got to do with being lucky?

Granted, three games is not a large enough sample to draw any brand of reasonable conclusion, and the panic button is a meager speck on the horizon. Two seasons ago, Bruce Boudreau's 7-0 start to the season was not indicative of what the larger sample would be, and last year Adam Oates' 2-8-1 start to his head coaching career didn't prevent the Capitals from winning the division, despite the shortened allotment of time for them to engineer their turnaround. Still, it's worth looking at each line to see what their respective contributions or detractions have been in this infant season.

The first line of Ovechkin, Nicklas Backstrom, and Marcus Johansson has been good, all boasting positive possession numbers (especially when compared to the rest of the team), with Johansson leading the team in CorsiOn and RelCorsi. This line is also responsible for pumping 18 shots on net at evens (and you can add five more rips that missed the net). This trio has been on the ice for two even strength goals against (and only one for Johansson), but they've been on the short side of the goaltending stick. It's clear that these guys aren't to blame for the Caps early even strength woes.

Moving down to the new-look second line of Brooks Laich, Mikhail Grabovski and Troy Brouwer, things take a dive. Grabovski has been a bright spot on this line so far (which comes to us as no surprise), and has probably somewhat buoyed the subpar efforts of Laich and Brouwer. Grabovski has managed to maintain a positive possession effect on his team, while his linemates have done the opposite. And indeed, it was Grabovski who fired home the first even strength goal of the season back in Chicago. We'd like to think that given Grabovski's strengths, and given his role on the trio, this line will right itself. They haven't been great so far, and Grabovski's wingers might have a new look sooner than later, but this line isn't where the team's most serious problem lays.

That dubious distinction belongs to the third line, home of Adam Oates's newest lineup experiment: Eric Fehr at center. Fehr, and his line as a unit, have been a horror story. Fehr and his left winger, Jason Chimera, are responsible for anchoring the team's possession numbers more than any other skater who has suited up for all three games. But not only is this third line not generating any offensive pressure and spending a lot of time in their own end, they're also digging the puck out of their own net an awful lot. Fehr and Ward have been on for six even strength goals against, Chimera for five. Only Ward has been on the ice for an even strength goal-for. This line is, in fact, among the worst in the league as measured by goals against/60, and it's very clear that so far this line is the Caps' even strength dead weight.

Though the source of our ire has been identified, we'll take a look at the fourth line, which has probably been the Caps' second most effective trio. Both Tom Wilson and Martin Erat are well into the possession positives, and against some pretty stiff competition— or at least against guys who have found possession success in games not against the Capitals. Jay Beagle has struggled mightily, but averaging barely over 5 minutes of ice, the 4th line pivot is hardly worth raising an eyebrow - and that's relevant. If you've got two guys who are showing well, but not having much of an impact by virtue of limited minutes, why not give them more minutes, on a different line? It's certainly possible that this line has been able to achieve good possession numbers because of their limited role facing opposing checking lines, but we tend to doubt it.

If you look at Oates's time on ice distribution by line, the fourth line is getting one-third the minutes as the second line, and about half the minutes of the third line. It's up to Oates to maximize the value of his players who are providing value at evens, and it's not very often that the answer to that puzzle can be found at a bottom line wing. More on that to come soon...