From Alzner to Wilson, we're taking a look at and grading the 2013-14 season for every player who laced 'em up for the Caps for a significant number of games during the campaign, with an eye towards 2014-15. Next up, John Erskine. 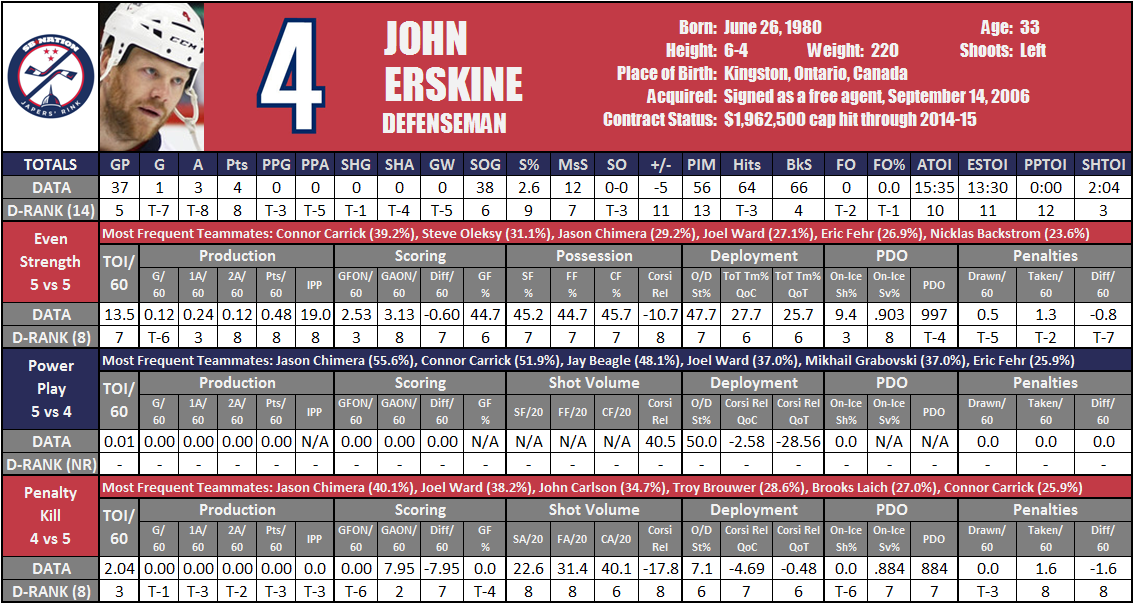 Erskine and his most frequent defensive partners, via Stats.HockeyAnalysis.com: 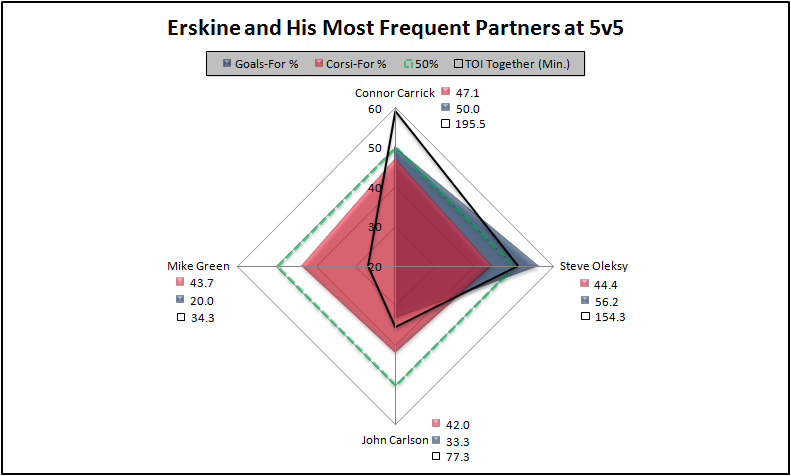 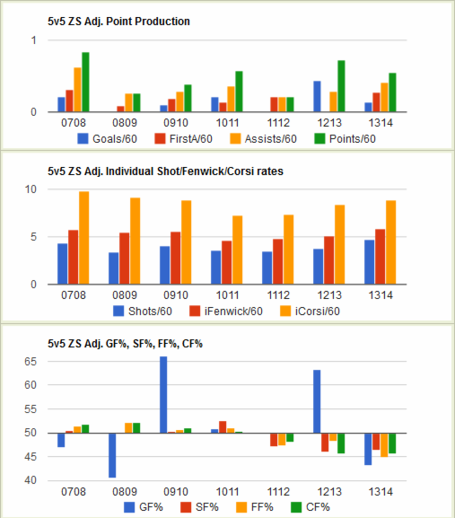 Interesting Stat: This was the first time in seven seasons that he finished with a negative plus/minus, ending the year at minus-5.

The Good: Say what you want about John Erskine, but he just completed his eighth season with the Caps (yes, eight!) and continues to be a feel-good story about how a stay-at-home defenseman with a limited skill-set can carve out a long career in the NHL based on toughness and guts. Every year Capital fans bemoan his lack of foot speed and his decision-making with the puck, yet every year he does what it takes to make the team, whether it’s providing much-needed snarl on defense, aiding teammates in distress and beating down opponents (2-0 on his fight card this year!), or being paired with prospects who have no right to play in the NHL.

The last point can’t be driven home hard enough. No one is going to claim that Big John had a good year, but in his defense (no pun intended), he played a majority of his minutes with Connor Carrick and Steve Oleksy. Contrast that with last year when he played an overwhelming majority of his 5-on-5 minutes with a defenseman by the name of John Carlson. That's a night-and-day difference and the results this year, unsurprisingly, are not favorable. Erskine shouldn’t expect to skate with all-star caliber defensemen, but he also shouldn’t expect to skate with prospects who should be in juniors. There is no doubt that his stats this year would have been better if he was playing with NHL-caliber defensemen. Don’t hold that personnel failure against him.

Aside from that, there aren’t many good stats to show you.  He did rack up 64 hits, third on the team. That’s not bad considering he played in less than half the games. (That’s just as much an indictment of the team's physicality though). And despite the practice being frowned upon by Adam Oates, he blocked 66 shots, good for third best among Caps defensemen - again done with limited minutes. Finally, he had a good shot suppression rate on the penalty kill at 22.6 shots allowed per 60 minutes of time. That was the team's best mark for defenders.

That’s about all the good there was, but keep hustling Big John…you’re not the problem with this team!

John Erskine and the End of the Line

Weighing the defenseman's contributions and deficiencies

John Erskine and the End of the Line

The Bad: Let’s start with the obvious: Erskine was rocked on the possession stats. He SF/FF/CF slash line was 45.2%/44.7%/45.7%, meaning that Erskine was a possession anchor, and not in a good way. It didn’t help his cause that he played easier minutes than most of his veteran colleagues om the blue line. His Goals Against per 60 was third worst on the team at 3.13, and worst among defensemen. Erskine also had the worst delta on the team in drawing vs taking penalties (0.8 per 60 minutes). Not to keep piling on, but the end result was that the team was 13-17-7 with Big John in the lineup, a paltry 73-point pace. Not effective.

Sure, part of this poor performance can be partly explained by the system and part can be attributed to his partner pairing. What it cannot be attributed to is puck luck. Granted, Erskine didn’t get much help in terms of save percentage when he was on the ice (0.903), but he did have an advantageous on-ice shooting percentage (9.38%), taking his PDO to 997. Simply put, he wasn’t unlucky this year.

Most importantly, Erskine was not able to consistently see the ice, a prevalent theme for the past three seasons. He started the season slowly as he recovered from off-season knee surgery, re-injured the same knee in late October, and never seemed to reach peak health for the remainder of the season. Consequently, he sometimes was a "healthy" scratch; but more often than not, Big John was out due to injury, including sustaining a (supposed) concussion at the hands of a Vincent Lecavalier sucker-punch on March 5. Overall, Erskine’s durability has been and remains a cause for concern. The intangibles that he brings are physicality and an ability to mitten-drop. Considering Erskine’s history of concussions, his future effectiveness in those areas is severely limited.

Overall, let’s hope this past season was just as much an aberration for Big John as it was for the Capitals.

Actually, maybe this belongs under "The Bad"... because John Erskine is a baaaaaaaad man, as Colton Orr was reminded on on January 10 (you'd think he'd have learned his lesson once or twice before).

The Discussion: Erskine has one year left on his contract. Is there any gas left in the tank? How should the Caps use him next year? What would it take for you to give him a "10" next year?