From Alzner to Ward, we're taking a look at and grading the 2013 season for every player who laced 'em up for the Caps for a significant number of games during the campaign, with an eye towards 2013-14. Next up, John Erskine. 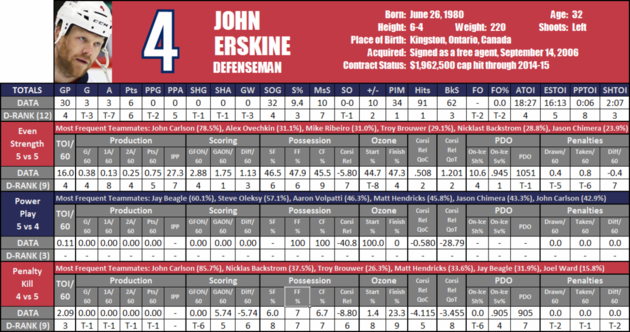 Erskine and his most frequent partners: 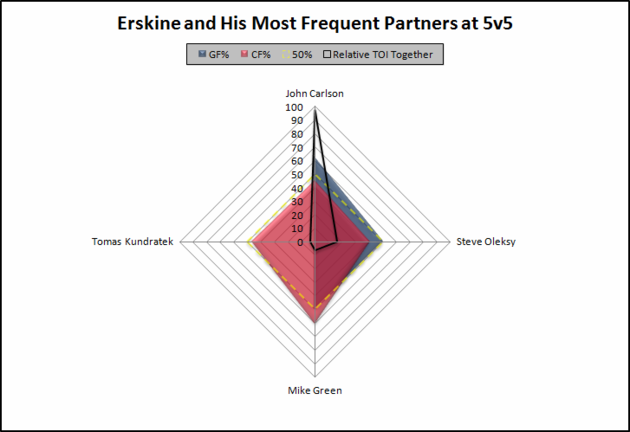 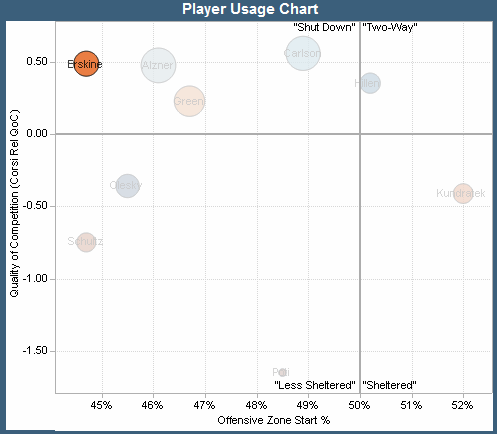 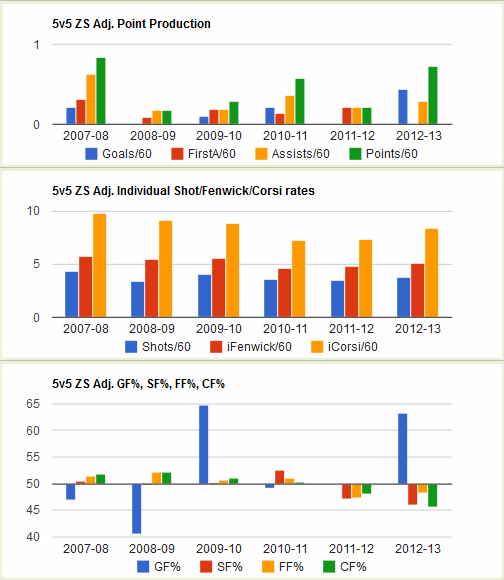 Interesting Stat: Only one player in the League played more minutes than Erskine and had both a lower Corsi-For percentage and a higher Goals-For percentage at five-on-five than the Caps' blueliner (Toronto's Mark Fraser, whose 45.1/61.8 split beat Erskine's 45.5/61.1).

The Good: Erskine set a career high in minutes- and shots-per-game, a career low in per-game penalty minutes, and posted highs in goals- and points-per-game among the seasons in which he's played at least 30 games as he firmly took hold of the four-spot on the Caps' blueline depth chart, partnered with John Carlson nearly 80% of the time. That partnership was quite successful, seeing 62.5% of the goals scored while they were on the ice together go in the opponent's net (raw number perspective: it was 20 out of 32), despite being a tick below 45% in terms of Corsi-For percentage, and while playing pretty tough minutes (Erskine's faced top competition and had unfavorable zone starts for most of the year). In other words, the duo was either exceptionally efficient and effective... or particularly lucky.

And perhaps we should add a "The Lucky" section to Erskine's Rink Wrap, because he was certainly that (though he was far from the only Cap to be similarly smiled upon by the fates). Erskine had a 5-on-5 on-ice shooting percentage of 10.6% and an on-ice save percentage of .945, both of which are high and add up to a PDO of 1051, which was fourth-highest in the NHL among blueliners with at least 30 games played.

In addition to good fortune and a good bit of personal productivity to go along with it, Erskine brought his typical hard-nosed style of play to a team that lacked it, especially on the blueline, as he led the D-corps in hits and dropped the mittens a couple of times when the situation called for it.

All of this earned Erskine a two-year extension and a nice raise to boot back in February. Hopefully the team made sure to re-sign the horseshoe, clover leaf and rabbit's foot he must have had tucked into his hockey pants in 2013 as well.

The Bad: Erskine's underlying possession numbers weren't particularly good, but for a defensive defenseman like he is, he's going to to depend on his teammates to sink or swim in those metrics to a large extent. Then again, he was a bit of an anchor himself. Carlson, for example, had a 44.9 Corsi-For percentage when he skated with Erskine this year, but was up at 53.1% when partnered with someone else. In fact, of the 21 skaters with whom Erskine played at least two minutes at five-on-five, only Nicklas Backstrom and Mike Green had better Corsi-For percentages skating with Big John than they had without him.

But puck possession isn't Erskine's game, physicality is. And while he was impressively tough-but-disciplined over the course of the season, he had a momentary lapse when he elbowed Philadelphia's Wayne Simmonds and earned a three-game unpaid vacation. Frankly, he was lucky (there's that word again) that he only got a three-game suspension for precisely the type of hit the League says it's trying to get out of the sport; he probably deserved five.

Finally, perhaps it was the regression that he was due or perhaps it was the 30-game regular season taking its toll (he did miss a dozen games with an upper-body injury), but by the time the playoffs rolled around, Erskine was playing his worst hockey of the season, and there was little that was going to bail him out, as he was on the ice for two goals-against in each of the three games in which the Caps allowed more than one and lost. In total, Erskine was on for eight goals-against in seven games, seven of which came at even-strength, and the last of which essentially slammed the door shut on any comeback hopes they might have had in Game 7.

Overall, Erskine as a top-four defenseman worked... until it didn't.

The Discussion: Can Erskine be an effective top-four blueliner for the Caps in 2013-14? Alright, we know the answer to that one. How about top-six? With whom would you partner him most regularly, and how would you manage his minutes? What would it take for him to earn a "10"?