From Alzner to Wilson, we're taking a look at and grading the 2013-14 season for every player who laced 'em up for the Caps for a significant number of games during the campaign, with an eye towards 2014-15. Next up, Connor Carrick. 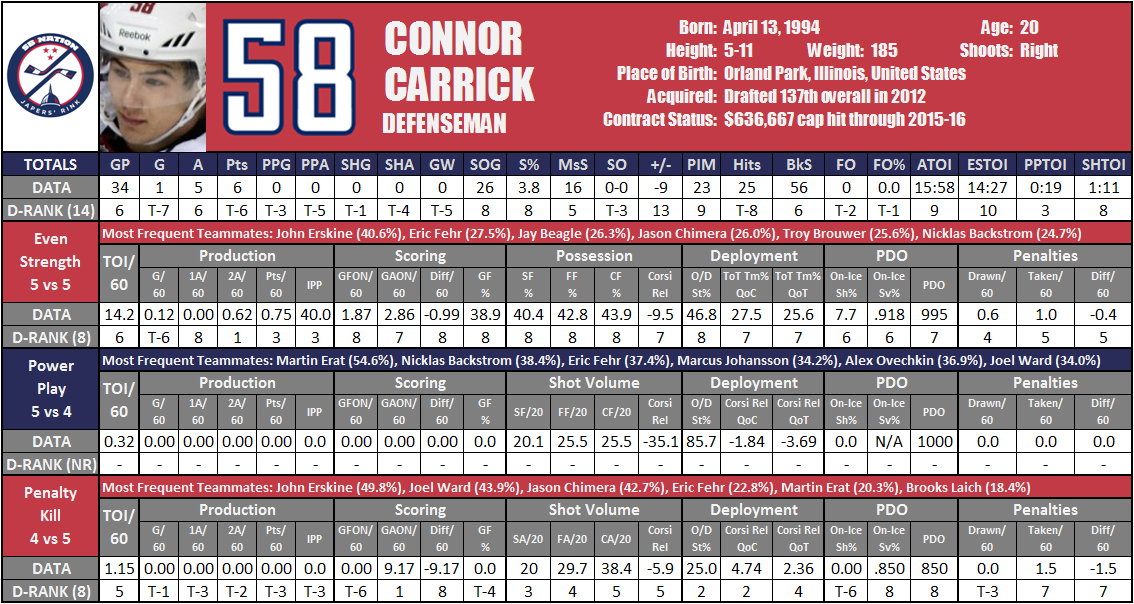 Carrick and his most frequent defensive partners, via Stats.HockeyAnalysis.com: 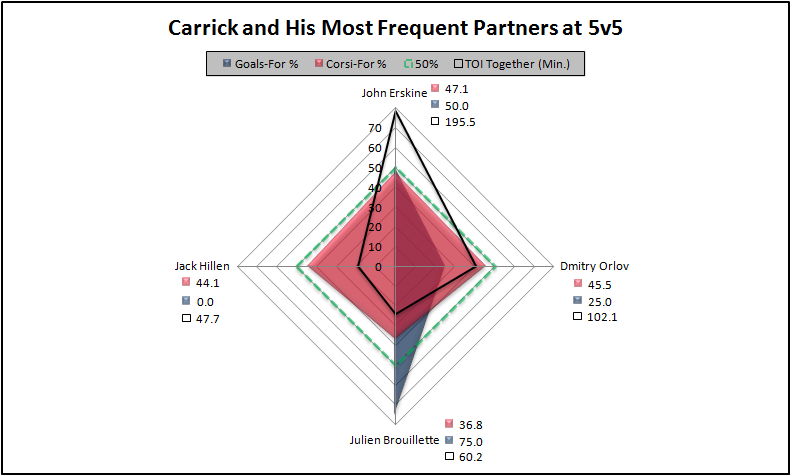 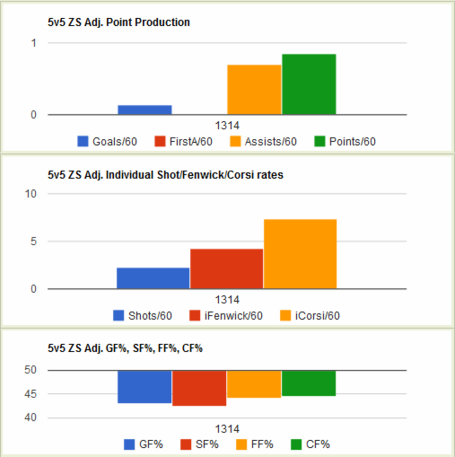 Key Stat: Only 14 defenseman in the NHL who played at least 25% of their team's games, had a worse five-on-five goals-for percentage than Carrick's 38.9.

Interesting Stat: Probably the most interesting aspect of Connor Carrick's rookie campaign was the organization's preference of him to other young blueliners like Nate Schmidt and Steve Oleksy (and we debated keeping Carrick in the NHL from very early on). Despite being heartily outperformed by Schmidt and Oleksy in most measurables, Carrick saw more TOI/game (15.7 minutes) than Oleksy (14.9), and more total games (34) than Schmidt (29).

The Good: Well, it was a year of firsts for young Carrick, and regardless of the ups and downs of the season, he's now got 34 games of NHL experience under his belt, including a healthy stretch of high-stakes games with his team struggling to stay afloat. Compared to his fellow blueliners, Carrick did show reasonably well offensively at even strength. His 0.77 pts/60 at ES was good enough for third on the squad amongst players who saw more than ten games, trailing only Oleksy and Mike Green.

So, in 2013-2014 Carrick, one of the Caps' top prospects, saw his first goal, his first assist, his first fight, his first penalty minutes. Scratch 'em off the list, young whippersnapper.

Connor Carrick and the Cost of Development in the NHL

A look at where Connor Carrick is, where he isn't and what it all means for the Capitals

Connor Carrick and the Cost of Development in the NHL

The Bad: There are good situations for a 19-year-old defenseman to come into as a launchpad for his career, and there are poor situations. Skating fifteen minutes a night on a team with flawed coaching, system design, and overall underperformance should be filed under "poor." And unfortunately, Carrick's measurables reflect that.

Carrick was the Caps' worst possession blueliner, and when he was on the ice, if a red light was flashing, it was a near guarantee that the good guys wouldn't be the ones hugging it out. And it's not as if Carrick's constant digging the puck from his own net can be attributed to poor goaltending, as the veritable army of different tenders that played behind him posted a perfectly respectable 92% save percentage.

More discouraging yet, the abuse of Carrick came at the hands of opponents who aren't exactly known for lamplighting. No Caps defenseman saw easier* (depending how you interpret the QoC metric) competition than Carrick. Granted, what does it say about Calle Johansson that he gives his most struggling defenseman the team leading percentage of defensive zone starts?

Lastly (and this isn't "bad" on Carrick, per say), the team didn't make him available to the Hershey Bears down the stretch... so, instead, he sat and watched hockey for a few weeks and wouldn't have been eligible for the AHL playoffs, had Hershey qualified. Add it to the list questionable managerial decisions.

Sprung from the penalty box on a gorgeous Marcus Johansson pass (not pictured), Carrick scored his first (and, to date, only) NHL goal in his second game. That tally cut Calgary's lead to 3-1 in a game the Caps would eventually win 5-4 in a shootout.