Two Dudes: The Kids Are Alright... But Is Alright Enough?

Are Tom Wilson and Connor Carrick here to stay? Should they be?

Share All sharing options for: Two Dudes: The Kids Are Alright... But Is Alright Enough?

One of the big story lines for the Washington Capitals over the last few weeks has been whether or not two promising teenagers, Tom Wilson and Connor Carrick, would be able to make the regular season roster. They were given every opportunity to show they should stick during the preseason, often acquitting themselves well... but that was the preseason.

When training camp closed, Caps fans found out that the two teens would indeed be on the opening night roster, and Tuesday night we all got to see what they could do against actual NHL competition (and pretty stout competition, at that). While recognizing that one game does not make a season, what do you think of their performance? Have either, or both, of the kids shown you that they should be regulars in the NHL lineup for the rest of the year?

(And, as we are wont to do, let's discuss the issues over an adult beverage or two.) 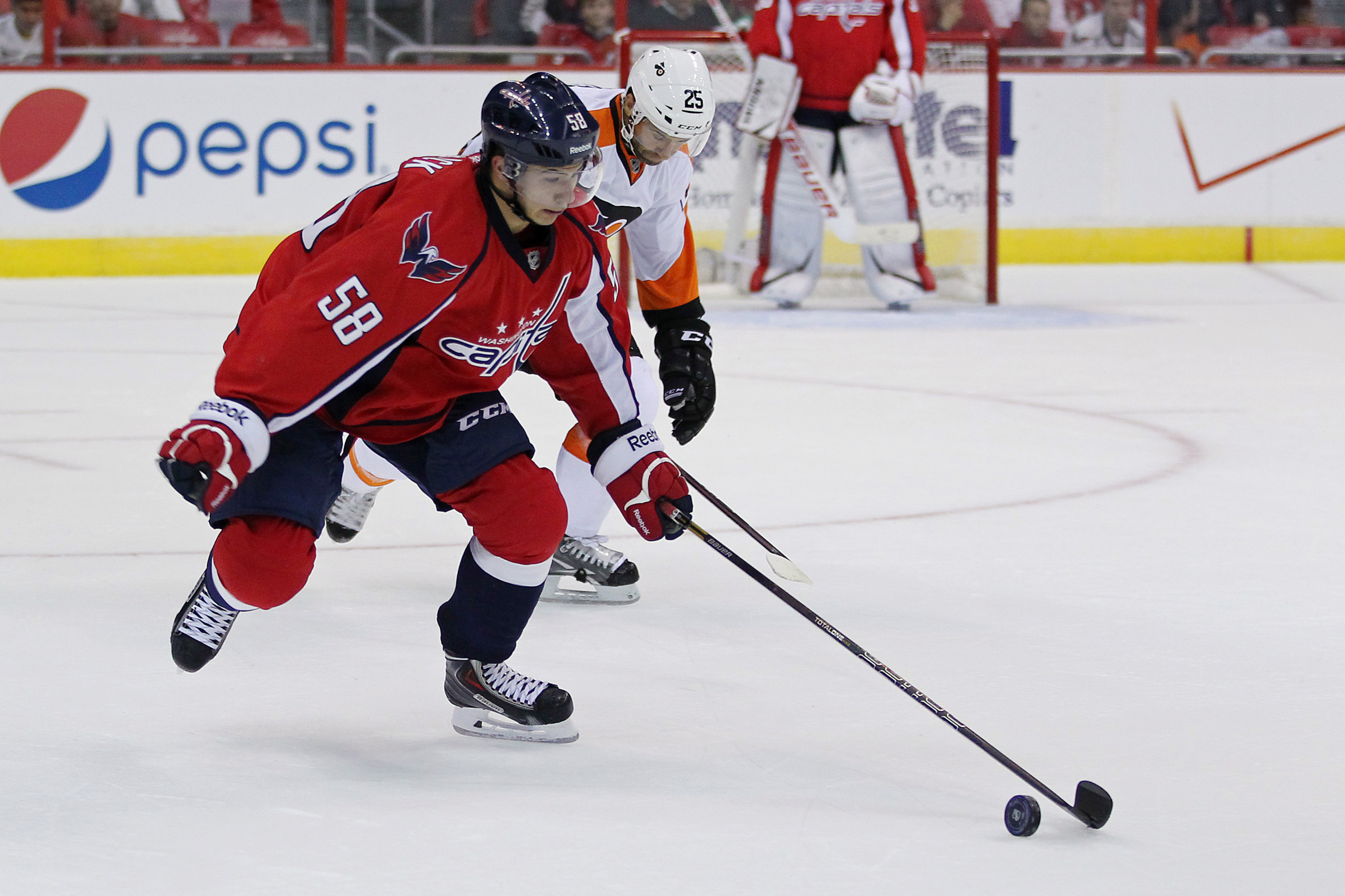 JP: Let's talk Carrick first. It was just one game, but he looked pretty badly over-matched, both physically and by the speed of the game... which is to be expected. He's nineteen and somewhat undersized (and being paired with Jack Hillen for his first NHL game - in Chicago, against the champs - didn't exactly help). He'd almost certainly get better with more experience in the NHL, but I've gotta believe that the plan all along was to reward the kid for having a great camp and whet his appetite with a sense of what the League is all about before sending him down, either to Hershey or back to his junior team in Plymouth (and perhaps letting that entry-level contract (ELC) of his slide for another year). He's been a nice story, but it's likely going to be time for the story's setting to change real soon.

As to Wilson, whether or not him making the team was the only reason the organization traded Mathieu Perreault earlier in the week, the fact is that they moved a legitimate NHL depth player to clear room for Wilson to skate... ten shifts and less than seven minutes in Game 1. I can't imagine that the plan is to keep him playing such small minutes. Maybe they're reluctant to hand him anything without making him earn it, but I'd expect more ice for him soon, and what he does with it will determine how long he'll be in D.C. If it's not clear that he's ready to be a contributor (and I have my doubts), I'd hope the team won't keep him here just because of the cost they sunk into fitting him into the opening night lineup.

So I suppose if I'm George McPhee right now, I'm watching Carrick closely over another couple of games to decide whether or not he's Hershey- or Plymouth-bound (the question there being, "Will I need this kid at any point during this season?" since he could be recalled from the AHL but not the OHL until that league's season is done), and I'm taking a longer look at what Wilson can do with a few more minutes in which he is put in a better position to succeed before deciding whether or not he should stick around for a while.

More: Tom Wilson and Connor Carrick: Ready for the Next Step... but Where? The Capitals' Top-25 Under 25 Is Tom Wilson The Missing Piece? Serving Youth Early

Rob: Carrick, as you noted, was physically overmatched. That isn't going to change over the course of the season. If anything, it'll get more extreme as he wears down due to the more strenuous minutes against veteran NHLers. It's great that he got to play in front of his family, but that's all we need to see of him in the NHL right now. At best he should get some time in Hershey, but there are several young defensemen and a couple veteran blueliners in Hershey that can fill in on the NHL roster in a pinch. The Caps, simply put, are not going to need Carrick at any point this season. If they can get by with John Erskine as the top-four rearguard, they can get by with Carrick unavailable to them, relying on the other depth defensemen to fill in when there is injury.

If the Caps are going to need help this year, it'll be playoff time. But by the time the playoffs come around, Plymouth's season will be over so he'd be available anyway. Even so, when the playoffs come around Carrick's physical immaturity will be an even bigger vulnerability, so how's he really going to help the team? They could send him to Hershey, let him add to the logjam of defensemen, and burn a year of his entry level contract taxiing him back-and-forth to D.C., but what's the point? He got a taste, now let him go back to the OHL where he can battle kids his age and play a ton of important minutes.

Wilson can at least claim to be physically ready for the NHL (as Brayden Schenn found out the hard way), but the rest of his game is not. I agree that sunk costs are not enough of a reason to keep him in the NHL. I just don't see any good reason to keep him in the NHL. We all want him to be that missing piece, but he's not that right now. He's a 19-year-old. The organization clearly loves him and yet they still couldn't justify giving him even ten minutes on Tuesday.

There's no reason to think his game is going to evolve much over the next couple weeks such that we'll learn more about him; they'll just get closer to him hitting that 10 game cutoff. Remember when John Carlson burned an ELC year late in the season? Why risk that with Wilson? Keep him at one NHL game, give the team potentially nine (hopefully playoff) games to play late in the season and see where he's at then, when the team might need him (or at least benefit from his presence). He's going to be much better in 2016-17, and I'd rather he be on his ELC in the NHL that year than this year. Send him back to Plymouth, let him get more confidence and ability in his offensive game, and then, if necessary, revisit the Tom Wilson experiment in the spring. There's nothing to be gained, or learned, from having him in the NHL right now.

JP: Eric Fehr at center is an experiment. Alex Ovechkin at right wing was an experiment. Tom Wilson isn't an experiment, he's a prospect, and a good one at that. He's also the type of physical presence that the team desperately lacks, and he has physically, mentally and defensively outgrown the OHL - he's ready for the NHL, and to say there's nothing to be gained or learned from spending the year around Adam Oates, Ovechkin and a team of men rather than boys is silly (to the contrary, the biggest things left for him in Plymouth might be bad habits).

No, it probably doesn't make sense to keep him here to skate ten shifts and six minutes per night (then again, a week ago if you'd told me that he was skating on Martin Erat's line, I'd have thought it was the second line...), but that's not likely the plan. The team can only kick cans down the road for so long, and if you're trading bluechippers for veterans that you plan to stash on the fourth line, there's at least a sense that the proverbial window is... well, you know. Tom Wilson will be a more effective player in April if he's here in October, November and so on, and that should be what really matters. So put him in a position to succeed now and see if he does - you've got eight more games to figure it out.

As for Carrick, there's no harm in sending him to Hershey and seeing if he acclimates well to the AHL. If he does, keep him there for a possible injury recall (can't think of a right-handed defenseman on the team who is injury-prone, but I'm sure a name will come to me...), and if he doesn't, send him back to be the mayor of Plymouth or whatever.

Rob: That's all fair enough, and however this plays out both of the kids have great futures so it's nice that we are talking "when" rather than "if." I don't think Carrick has much to lose by going to the AHL, except maybe some ice time, so it won't raise my ire if that's the route the team takes. For Wilson, if the window's closing then it's even more important for the team to squeeze all of the ELC value they can from their top prospects, but if he is better prepared to contribute in the spring by coming along slowly in the fall, Caps fans will all be happy. I would question what kind of habits he is likely to pick up in Washington, given some of the past behavior and performance we've seen, but that's in the past and I'm willing to trust Oates on this... and trust that it's time for another round. You buy.