From Alzner to Wilson, we're taking a look at and grading the 2013-14 season for every player who laced 'em up for the Caps for a significant number of games during the campaign, with an eye towards 2014-15. Next up, John Carlson. 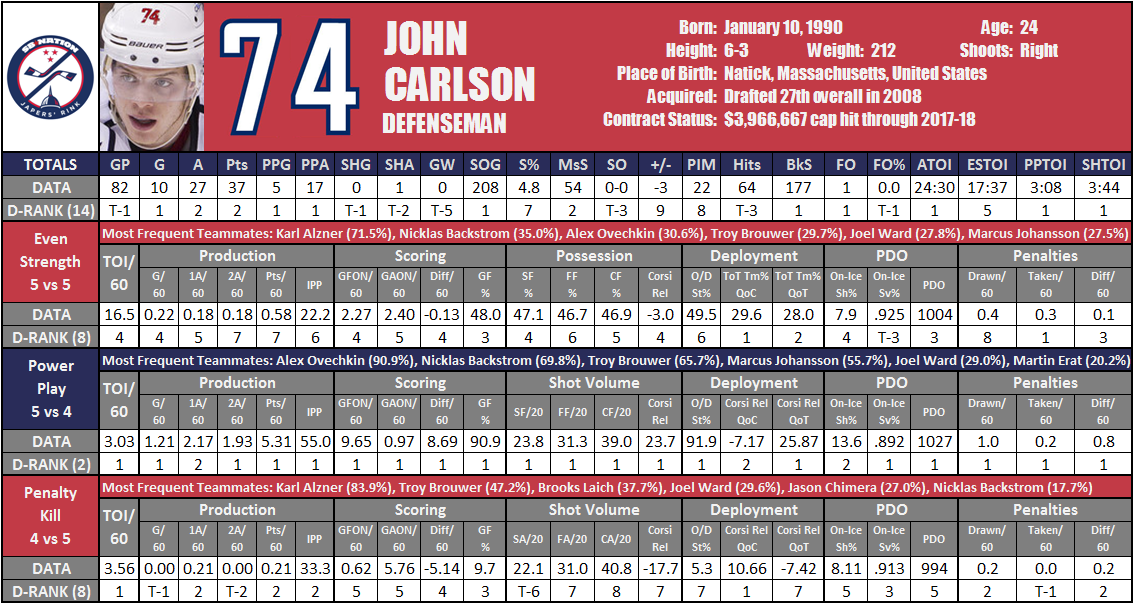 Carlson and his most frequent defensive partners, via Stats.HockeyAnalysis.com: 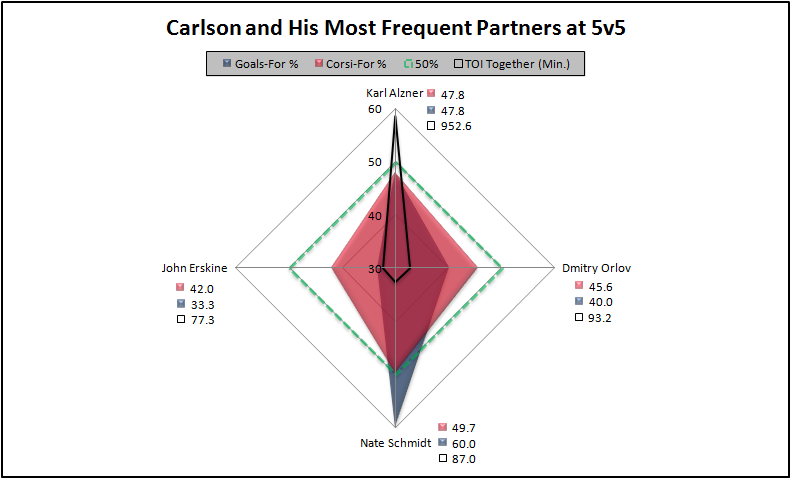 Carlson's Past Five Seasons (via Stats.HockeyAnalysis.com): 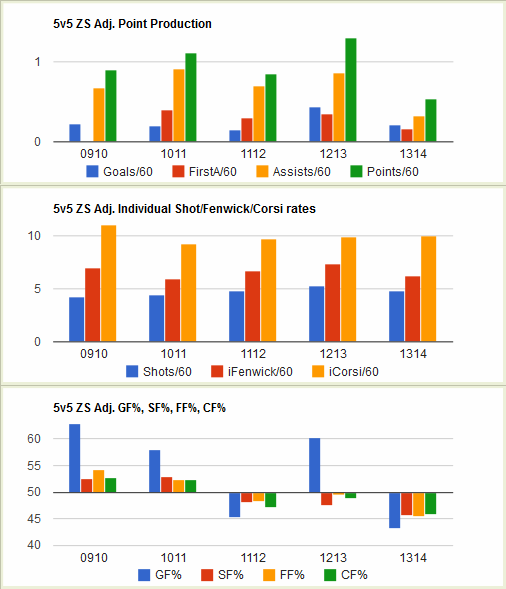 Key Stat: No player in the NHL played a higher percentage of his team's shorthanded minutes than John Carlson did for the Caps.

The Good: Carlson finally reached double digits in the goals column, setting a career-high with ten goals this year despite the lowest shooting percentage since his rookie year. Carlson's five power play goals equaled his career totals entering the season, and his 17 power play assists were more than he had in his career when the season started (13). Carlson also set a career-high in shots with 208, which is 56 more than his previous career-high. Overall, Carlson had a respectable offensive year, tied in points with Drew Doughty, but it was the defensive side of the ice where he continued to grow and provide the most value to the Caps.

As noted, no NHL skater played a higher percentage of his team's shorthanded minutes, and only Braydon Coburn and Bryce Salvador played more shorthanded minutes per game than Carlson. Not only did Carlson play heavy minutes on the PK (after all, high volume minutes on a mediocre-to-bad penalty kill isn't necessarily a ringing endorsement), but the team was better with Carlson on the ice than off the ice while shorthanded.

Carlson was also, once again, paired with Karl Alzner and relied upon to handle the tough competition. On a team that generally stunk out loud in the possession metrics, Alzner and Carlson did a solid job of handling the opposition and keeping the Caps from being completely dominated at even strength.

Carlson also represented the USA at the Olympics in Sochi. After a great first game (including scoring USA's first goal of the tournament), Dan Bylsma saw fit to pair Carlson with one of the American veterans, Brooks Orpik. The duo was underwhelming early (and the righty-righty pair no doubt made Adam Oates twitch just a bit...), getting exposed by Pavel Datsyuk against Russia, but got stronger as the tournament progressed, playing perhaps their best game in the loss to Canada. In an Olympic tournament that wasn't particularly favorable for the Americans (during an NHL season that wasn't kind to the Caps), we Caps fans at least got to watch Carlson play well on the international stage, hopefully for the first (second, if you were paying attention) time of many.

It's also worth noting that although Carlson played tough minutes and did relatively well he had one of the best on-ice save percentage marks of any of the regular defensemen (the highest of any defender that was still around after the Olympics). Without that, his performance against the tough competition might not have looked so tolerable, and through large stretches of the season it didn't look like Carlson and Alzner were a true shutdown pair. Someone had to play the top competition, and with Mike Green and a bunch of rookies and cast-offs filling out the defensive corps, it almost had to be Carlson and Alzner by default. "Respectable given the circumstances" is not what Caps fans envisioned from their shutdown pair when Carlson and Alzner were united as young, promising defensemen in the NHL. Now they both have 300 games played and this year, at least, they didn't look like one of the elite defensive pairs in the league.

Tied early in the third period against the Anaheim Ducks, on the first of a three-game swing through California (a road trip that has not traditionally been kind to the Caps), the Caps were afforded a power play chance. After keeping the puck in the zone under pressure, Carlson made a quick turn and bank pass off the board to Backstrom, and then faked a one-timer off Backstrom's return pass, instead setting up Ovechkin for the deadliest one-timer in the game today.

The Discussion: Is John Carlson a legit number one defender for a team that could win the Stanley Cup? Did his performance on Oates' power play make Mike Green redundant? Does Carlson have another level to reach, is he a potential Norris Trophy winner in the coming years? What would it take for you to give him a "10" next year?