From Alzner to Wilson, we're taking a look at and grading the 2013-14 season for every player who laced 'em up for the Caps for a significant number of games during the campaign, with an eye towards 2014-15. Next up, Braden Holtby. 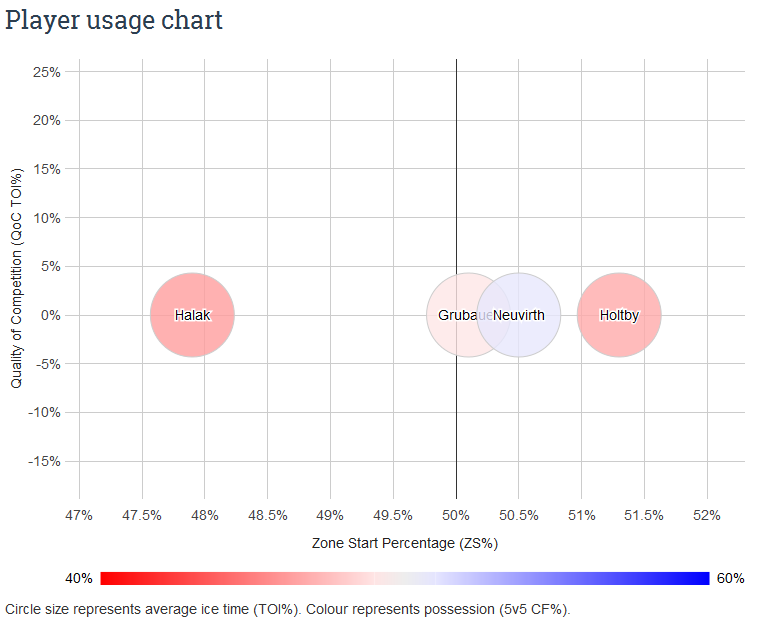 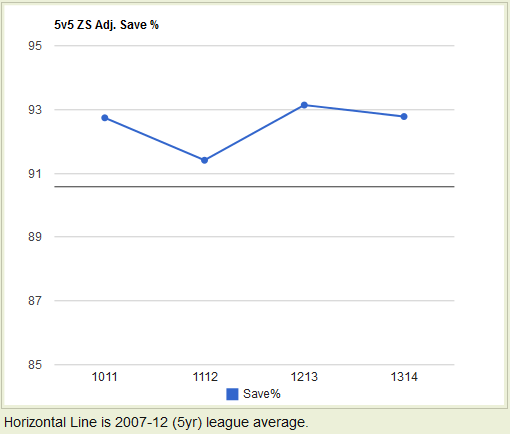 Key Stat: Of goaltenders who started more than 50% of their team's games, only Tim Thomas, Craig Anderson, and Ondrej Pavelec allowed more goals/60 than Braden Holtby's 2.9. Granted, there's a bit of a chicken-or-the-egg question, given the Caps' teamwide 2.34 GA/60 (20th in the NHL)

Interesting Stat: Keeping the qualifier of goalies who played 41 games or more, only Craig Anderson and Jonathan Bernier saw more rubber per game than Braden Holtby, who faced 33.3 shots per game.

A look at the Caps' young netminder's career to date, and what his past performances might tell us about the future.

The Good: Despite being the primary goaltender during a campaign that will be best remembered for sustained woeful defense, Holtby did manage to tie a career best with 4 shutouts, not to mention a noteworthy outing against the Bolts. And all things considered, Holts' 23-15-4 record is nothing to turn a nose from. Furthermore, if Holtby really is the Caps franchise netminder and workhorse, as he's seemed to be at points during each of the past two seasons, the most recent campaign saw Holts in net for 48 games, a number that no doubt would have (should have?) been higher if not for a surprising stretch of play devoted to Phillipp Grubauer (and might this continue into next year?), and a bizarre trade for Caps' anathema embodied, Jaroslav Halak.

It's a bit cliche, and not quantifiable, but you have to admire Holts' closed-mouth approach to the coach's and organization's questionable management of the goaltending position. He grinned and bore it, despite plenty of opportunity to point fingers or shirk responsibility. And Holts finished strong. Real strong. From February to the end of the year, Braden posted a record of 8-1-3,  and a .927 sv%, all with the same shot-hemorrhaging that plagued Washington all season. It's also worth mentioning that Braden was pretty money after regulation, with a combined OT and shootout record of 9-4, and turned out a fair showing (9-6-2) against a division that the team struggled with (12-15-3) all year.

A possible explanation for part of the Caps' netminder's recent struggle

The Bad: Well, getting his head pummeled by a trained boxer was pretty bad. Career worsts in save % (.915) and GAA (2.85) were pretty awful too. And while the tremendous shot volume that Braden Holtby faced was by no means a good thing, it does have the potential to pad save percentage numbers. But other goalies who saw a similar shots against rate such as Ryan Miller, Semyon Varlamov, and Jonathan Bernier all posted better save percentages than Holts.

Holtby also allowed 4 or more goals 14 times over the course of the year, including one particularly awful stretch in late December/early January when he let in 5 in three consecutive starts. Even with shot volume and futile defense considered, Holts turned in plenty of subpar performances, and certainly more than you'd like to see from an everynight-type backstop. The discrepancy in goals allowed in the 2nd period from the 1st and 3rd period also raises some interesting questions. In periods 1 and 3, Holts allowed 35 and 36 goals, respectively. That number skyrockets to 53rd in the 2nd period. It's never easy to win after an ugly second frame...

The Discussion: Is Braden Holtby the Caps' goaltender for the forseeable future? How much of Holtby's underwhelming stats were a result of the guys in front of him? Would the team have been better off sticking with Holtby instead of the intermittent stints of Grubauer and Halak? And what would it take for him to earn a 10 next year?