A look at the Caps' young netminder's career to date, and what his past performances might tell us about the future.

Share All sharing options for: Is Braden Holtby a Franchise Goaltender?

The Washington Capitals' locker room has a certain feel after victories. You might call it a buzz. A tangible energy comprised of good-natured camaraderie between triumphant teammates eagerly shedding their battle garb. If you tune into locker room coverage, you've likely noticed a trend: it's rare that a post-game interview passes without a lauding of Braden Holtby, the Caps' starting netminder.

Most recently it was a 4-1 victory over the St. Louis Blues, a game in which Braden Holtby stopped a career-high 46 shot, that earned the praise of the guys who skate in front of him. But Holts (as he is affectionately referred to by the players and others around the team) is no stranger to a heavy workload and a high shot volume. In fact, he seems to thrive under such hostile conditions... last night against the Penguins notwithstanding. And while Holtby's outing last night isn't one he's likely to add to his DVD collection, it's important to remember that games like those happen to all goaltenders - especially young ones - and if there are a few rotten trees in the woodland, the forest still looks awfully nice.

So where does Holtby stand relative to the organization's vision? Is he just another vacillating plastic horse on the carousel of post-Kolzig 'tenders - Huet, Johnson, Theodore, Neuvirth, Varlamov, Vokoun? Or is he something else? A mainstay? The young, dependable, durable, and effective goaltender that's something of a rarity in today's NHL? We sure hope so.

Holtby's introduction to the big leagues has been stilted and unorthodox. In 2010-2011, Holtby won 10 of his first 14 NHL starts before handing the reins back to Michal Neuvirth for postseason duty. The following season Holtby only started 7 regular season games. But ill-timed injuries to both Neuvirth and Tomas Vokoun put Holtby in the driver's seat for a playoff series against the defending champion Boston Bruins, where he would surprise the world by outplaying incumbent Vezina Trophy winner Tim Thomas, all but anointing himself the starter for the following season. But as it happened, the following season was shortened by the lockout, and Holtby only saw 36 games.

So how has Holtby fared relative to other goalies in the league who are considered "franchise", or "elite", goalies? Below, Holtby is compared to five goaltenders who are seen as elite, who have played for only one team, and who have been given major long term deals, focusing on the first season in which they played forty games or more:

Not bad, right? But might Holtby - who hasn't yet started 40 games in a season, though he obviously would have last year if not for the lockout - be benefitting from his smaller sample size? Well, let's take a different tact, and look at all the same goalies, and at what they did through the season of their 24th birthday (as this one is for Holtby):

For your convenience, here are Holtby's numbers put up against the averages from these nine franchise goalies through the season of their 24th birthday:

It's worth noting that numbers based on sample size such as games played and wins will continue to increase through this season, and it's likely that Holtby's games played and wins, by spring, will be similar to Jonathan Quick's numbers in the chart above. In everything else, he exceeds the average - among a pretty decent group of goalies, for that matter. In fact, he's in lofty company in terms of goaltenders who have maintained a save percentage of greater than .920, while playing greater than 50 games through his first three seasons.

But regression is certainly possible, right? Look at Steve Mason - nominated for the Vezina his rookie season, and then...well, here are his numbers. Is it possible that Holtby has been similarly lucky?

Well, the good folks over at Artic Ice Hockey give us a way to measure (and their corresponding explanation can be found here): 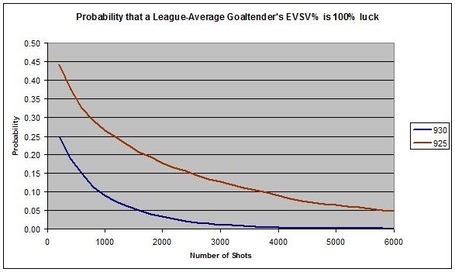 Because Holtby's career even-strength save percentage is .929, the blue line indicates the probability that his statistics are influenced by luck or randomness, using the number of shots he has faced as a fulcrum. To date, Holtby has faced 1805 even-strength shots in his career. Referencing the chart above, that puts the probability of luck being a factor at about 5%. Or, in other words, there is a ~95% chance that Braden Holtby's career numbers to date aren't just luck, and that he's actually an above-average goalie.

George McPhee handed Holtby a two-year extension last year, securing the possible franchise netminder on the cheap until the end of the 2014-2015 campaign. It was a saavy move by GMGM. With two more full seasons under Holtby's belt, management will have a lot more to work with when considering if Holtby is deserving of one of the big K's that all the guys in the charts above received.

There's obviously plenty that's intangible when it comes to these numbers: the goaltender is simply the last line of defense, and his numbers are not independent of the level of play and style of play - or system - of his team. Regardless, the numbers above appear to answer the question of "Is Braden Holtby a franchise quality goaltender?" pretty well, and the answer is "Yes."