A possible explanation for part of the Caps' netminder's recent struggles

Share All sharing options for: Olie Kolzig May Have Broken Braden Holtby... Can He Fix Him?

Coming off a loss to Carolina in which he allowed four goals on 23 shots in the forty minutes he played before getting pulled in favor of Philipp Grubauer, Braden Holtby was struggling on December 4. The Caps' putative franchise netminder sported a 12-9-1 record, with a 2.74 goals against average and a .922 save percentage (which was right about his career average coming into the season), but had dropped four of his previous six decisions while posting relatively unsightly 3.09 GAA and .913 save percentage. Holtby had been letting in more should-save shots than he'd been accustomed to allowing, a trend that culminated in a pair of softies beating him in that loss to the Hurricanes.

Too many goalies and not enough ice time has created a tenuous situation in net for the Caps.

On December 4, of course, Braden Holtby barely knew the meaning of the word "struggling," relative to the month that would follow, a span that would be characterized by sporadic work, spotty play (to the tune of 1-2-1/4.82/.843) and, ultimately, Saturday night's embarrassment.

The situation has been much lamented, the "what" well-documented. But what about the "why"? The most obvious answer is that Holtby has simply hit a bad stretch - all goalies have them. Holtby's had them. Some are worse than others, and this is a bad one (made all the worse by the span over which it's been stretched).

But if there's more "there" there, it may be a change in the philosophy and the coaching Holtby is receiving from his goaltending coach, Olie Kolzig. Specifically, Kolzig wants his goaltenders playing deeper in the net. As he explained it back in early December:

"The game today is a lot more East-West than North-South. We felt a lot of the goals in the league are coming from passes made through the slot, back door plays, and so what we try to get our goalies to do is to play a little flatter, as opposed to squaring up on the shot.

"The old philosophy was to establish your ice and retreat back as the play is coming toward you. I’m from a generation when a defenseman could hook and hold and you could focus on the puck carrier. You can’t do that anymore. It’s more open, so goalies have to sit back and evaluate what’s in front of them.

"Now we want the goalies to read the play and instead of coming out back to in, you’re staying deep, reading it, and going from in to out.

"If there’s a clean-cut break and one shooter, take ice. But if there is a potential for a backdoor, hold your ground."

There is a tradeoff, of course, and that comes on those shots that don't involve a lot of lateral movement prior to the trigger being pulled. From that same CSNW piece quoted above:

"It makes those shots a little tougher because you’re playing deeper and with your body at more of an angle," Holtby told Monumental Network [video] before Tuesday’s game. "That’s where you have to kind of trust yourself and not be too scared of letting in a soft one from there, because in the long run we believe it will help."

"We knew going into this we were going to give up some goals they weren’t normally used to giving up," Kolzig said. "But we felt they would be few and far between and the positive effect from that is that they are going to make a lot more saves that they hadn’t made in the past."

To illustrate the point, let's look at one of those goals Holtby wasn't "normally used to giving up" from that December 3 game against Carolina. Here it is:

And now a closer look at Holtby's positioning, showing both deep in the net (where he was) and out a bit to challenge (where he might have been in the past) poorly superimposed on top of it: 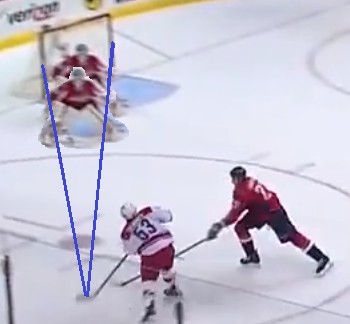 It's pretty easy to see that as a goalie comes out, the shooter has less to shoot at; that's just simple geometry. And, in fairness, this might have been one of those cases where it was a "clean-cut break and one shooter" where Holtby was supposed to "take ice." But he didn't.

Anyway, all of this brings us to the grand conclusion, which is that Holtby will right the ship, but it's going to take some time and some games. Going back to that same quote well one last time...

"You can’t bombard them with all this information and expect them to have instant success," Kolzig said. "As a goalie the last thing you want to do in a game is think. You want it to be automatic and react to the play."

"It’s coming," he said. "It’s harder to create the subconscious to do them naturally if you don’t do them a whole bunch in games or practices. Those things will take a little more time, but most of the in-zone stuff is second nature already."

Here we are more than one month later, and Holtby is fighting the puck worse than before. Whether or not Kolzig has tried to fix something that wasn't broken at the time, it certainly seems to be now. And if the solution is more playing time, the Caps need to place a higher priority on getting Holtby those minutes than they have over the past month or so. Time to coach, coach. 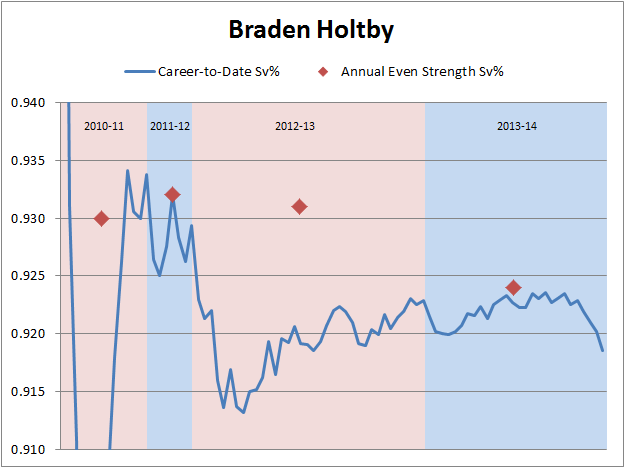