From Alzner to Ward, we're taking a look at and grading the 2013 season for every player who laced 'em up for the Caps for a significant number of games during the campaign, with an eye towards 2013-14. Next up, Braden Holtby.

Holtby's zone-adjusted five-on-five save percentage for the past three seasons (via Hockey Analysis): 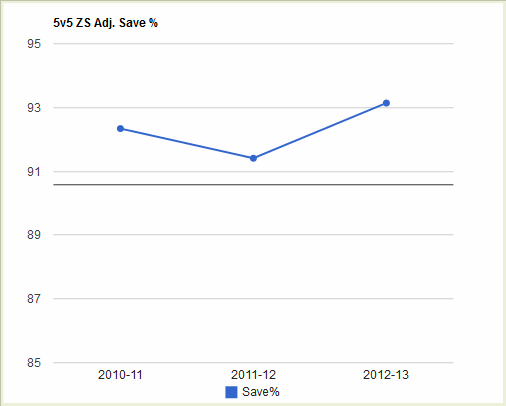 Interesting Stat: Holtby’s 0.889 shootout SV% was the highest in the league for goalies who played in more than one shootout.

The Good: The 2013 season will be known as the year where Braden Holtby developed into a bona-fide NHL starting goalie. In 35 starts, he notched a 23-12 record, four shutouts and, most importantly for a goalie, a 0.920 SV%, an above-average mark that was good enough for 14th in the league for goalies who started more than 15 games. This occurred while Holtby played in front of a porous defense that allowed a third-worst 1551 shots on net (trailing only Edmonton and Buffalo), leaving Holtby to face down 29.8 shots every 60 minutes. A good goalie bails out a bad defense, and that's exactly what Holtby did - it's not a stretch to think if he doesn't perform as well as he performed this season, the Caps would not have made the playoffs. Alex Ovechkin may have stolen the headlines this season, but Holtby’s performance likely had as much to do with the Caps regular season success as Ovi’s did.

The Caps didn't get to the talent competition all that often, but when they did Holtby came up big, posting a 3-0 record in shootouts and stopping a near-perfect eight of nine shots - a far cry from the rookie who was undressed by the New York Rangers in his shootout debut two years ago. This drastic improvement in this area of his game gave the Caps a few extra standings points, helping to propel them to another Southeast crown.

Most importantly, Holtby likely cemented himself as the goalie of the future, hopefully putting an end to a revolving door of goaltenders that has been spinning since Olaf Kolzig gave way to Cristobal Huet late in the 2007-08 season. In Holtby, the Caps may finally have a young, durable goalie that has the talent and mind-set to man the nets for the next several years... and he’s cost controlled for another few seasons.

The Bad: Despite the breakout season, the playoff series highlighted the ups and downs in Holtby’s brief career. Critics will rightfully point to his wretched performances in Games 3, 4, and 7 of the Rangers series, when he collectively allowed 13 goals. And he couldn’t have picked a worse time to melt down than Game 7, allowing an ugly goal to Aaron Asham in the first period and initiating the 2012-13 version of the annual Washington Capitals spring-time swoon. Obviously, those performances have to cease for Holtby to be considered an elite NHL goaltender.

Of course, focusing on Games 3, 4 and 7 ignores the fact that he played phenomenally in Games 1, 2, 5 and 6, racking up a preposterous 0.974 SV% while allowing two goals - but therein lies the real issue: despite possessing above-average talent, Holtby has not found the necessary consistency (yet) needed to reach his full potential, and there was no greater evidence than his up-and-down postseason run.

One way to measure consistency is to calculate the standard deviation of his save percentages on a game-by-game basis. The smaller that number is, the more consistent his performance; the greater the number, the more wildly his performance is likely to swing from game to game. The standard deviation on Holtby's regular season SV% was 0.061, which means that on any given night it’s entirely plausible to expect Holtby to be anywhere from a 0.859 goalie (bad) to a 0.981 goalie (pretty much a guaranteed win). That’s a large delta. Contrast that with league stalwarts Craig Anderson, Tuukka Rask and Henrik Lundqvist, who each boast higher save percentages (0.941, 0.929, 0.926, respectively) and smaller deviations (0.050, 0.053 and 0.046, respectively) than Holtby. The three of them are both talented and consistent; for the most part, you know what you’re going to get from them each and every night.

Essentially, for Holtby to reach this elite level, he needs to have fewer bad games, because he has certainly demonstrated that he has elite-level talent. Becoming “consistent” is neither an athletic nor a technical issue, it’s a mental one, and something Holtby has to master. In Holtby’s defense his fluctuating performance is not unusual for an early-career goalie. But the reality is that the Caps are a defensively-challenged team under a lot of pressure to win, and they need a goalie that can routinely bail them out. Holtby has to be the guy.

Additionally, it would be remiss for us not to discuss his penchant for giving up back-breaking goals on puck-handling mistakes. Game 4, arguably, was lost when he spotted the Rangers a 1-0 lead with a horrible giveaway. And there were several similar giveaways during the regular season. Those bad goals can wreak psychological havoc on a team with a [cough]less refined mental disposition[cough]. Holtby has to avoid giving away those freebies. Who knows how different Games 4 and 7 would have been if he didn’t allow cheap first goals to the Rangers.

The good news is that if Holtby can find more consistency and reduce the puckhandling gaffes, then his SV% will climb closer to the 0.930 range, which would cement him as a top 10 goaltender. Now if he could only beat the Rangers…

The Discussion: Is Holtby the future in net? What would it take for him to earn a "10"?