From Alzner to Wilson, we're taking a look at and grading the 2013-14 season for every player who laced 'em up for the Caps for a significant number of games during the campaign, with an eye towards 2014-15. First up, Karl Alzner. 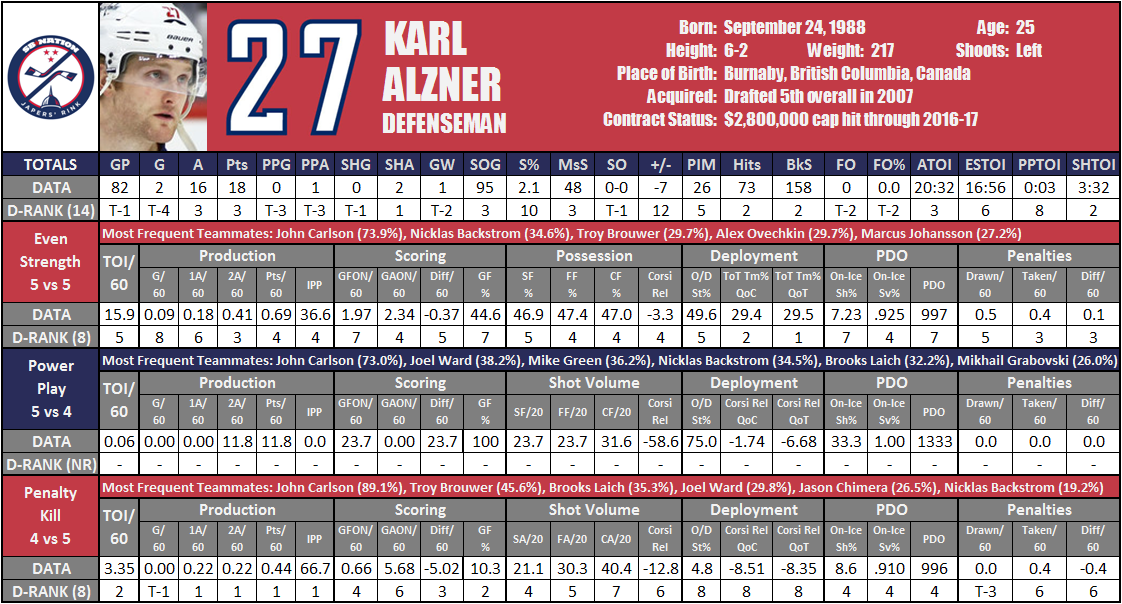 Alzner and his most frequent defensive partners, via Stats.HockeyAnalysis.com: 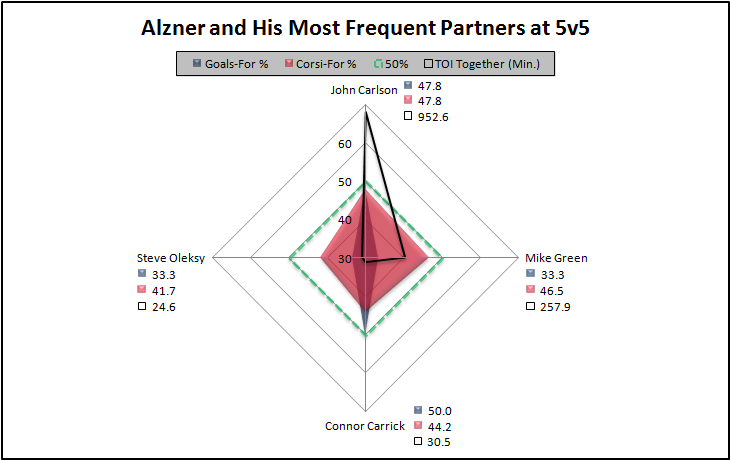 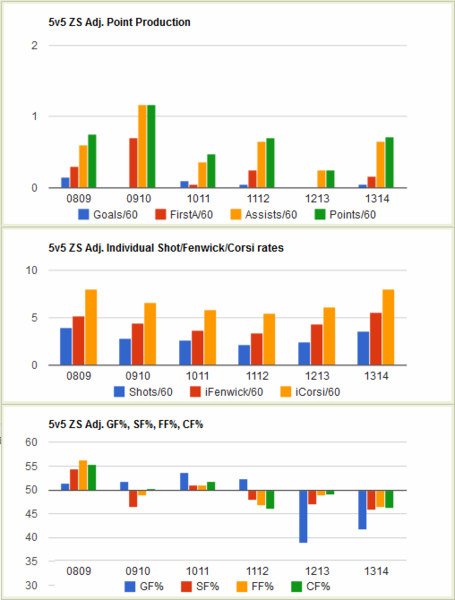 Key Stat: Alzner played in every Caps game for the fourth-consecutive season, and that stretch of 294 games in-a-row is the second-longest streak for a defenseman in franchise history, trailing only John Carlson 's current run by two games.

Interesting Stat: 292 games into his NHL career (148 of which were played at home), Alzner scored his first goal at Verizon Center (and first game-winner) on December 7 against Nashville.

The Good: Alzner set a career-high with 18 points and tied personal bests in goals (2) and assists (16), fueled by the highest shot rate of his career (putting 50% more shots on goal in 2013-14 than in his most prolific prior season).

But offense is always a second thought when it comes to Alzner, who once again played the tough minutes and a lot of them, doing a decent job shutting down top opponents (Corsi- and Goals-for percentages just a tick under 48%) when paired with Carlson. Moreover, his 3:32 of shorthanded ice time per game was sixth-most in the NHL, and, at 61.3%, Alzner played the fourth-highest percentage of his team's shorthanded minutes in the League (Carlson was first). The Caps' penalty kill was middle-of-the-pack, but a good bit better when Alzner was on the ice than when he wasn't (and it's easy to assume that that disparity would've been even greater had Alzner's minutes there been pared back a bit).

The Bad: Karl Alzner is a thinker and, at times during the Adam Oates Era, seemed to be an over-thinker, relying too much on trying to remember the "right" thing to do rather than simply reacting and defending like he had previously. The result was indecision, missed assignments, and some blooper reel-worthy defense generously mixed in with otherwise solid play.

Overall, it's hard to look at Alzner without thinking that he's regressed over the past few years and that his development needs to get back on track as soon as possible. Perhaps more than anyone on the roster, Alzner should benefit from the change behind the bench (especially if we assume that it will include replacing Calle Johansson as well).

With just over ten minutes to go in the third period of their March 8 game against the Coyotes, the Caps found themselves down two goals before this Alzner tally sparked a furious three-goals-in-five-minutes run that gave the team two seemingly critical points (and their third-most improbable win of the season) at the end of a rough week.

The Discussion: The big question on Alzner is whether or not he's a legitimate top-pairing defenseman on a team that aspires to be a contender, or if he slots in better in the second-pairing. Which is it? What would it take for you to give him a "10" next year?