From Alzner to Ward, we're taking a look at and grading (please read the criteria below) the 2013 season for every player who laced 'em up for the Caps for a significant number of games during the campaign, with an eye towards 2013-14. First up, Karl Alzner.

Japers' Rink Player Card (click for hi-res version, a glossary of terms used in this post can be found here; data via Behind the Net, Hockey Analysis, CapGeek and NHL.com; h/t Habs EOTP): 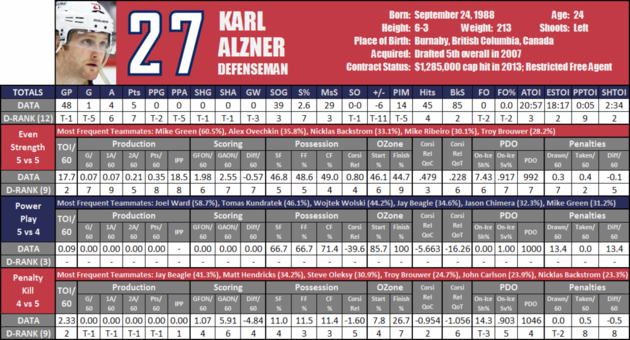 Alzner and his most frequent defensive partners: 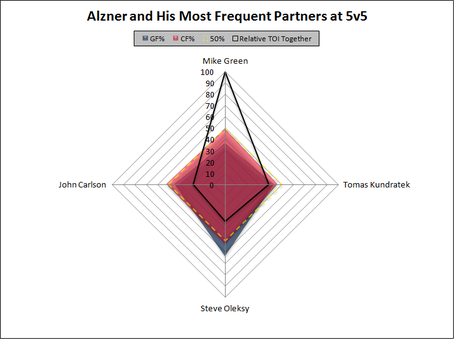 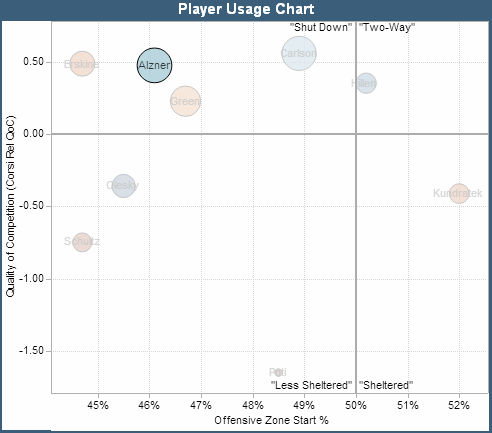 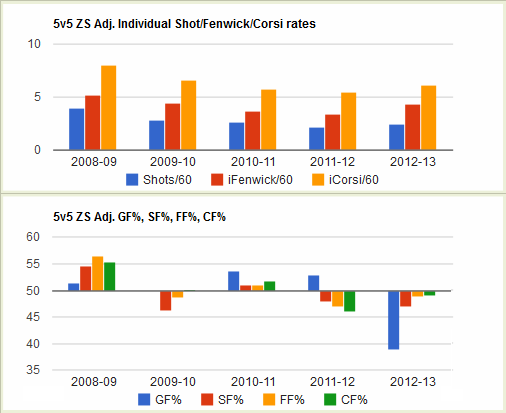 Key Stat: Skated 156:08 in the playoffs (including 52:41 against Rick Nash at even strength) and was only on the ice for two Rangers goals - single five-on-five tallies in Games 4 and 7 to go along with 22:55 of spotless penalty-killing.

Interesting Stat: Registered five shots on goal in a game for the first time in his career in his 282nd game (regular season and playoffs)... and then did it again a dozen games later in Game 7 against New York. 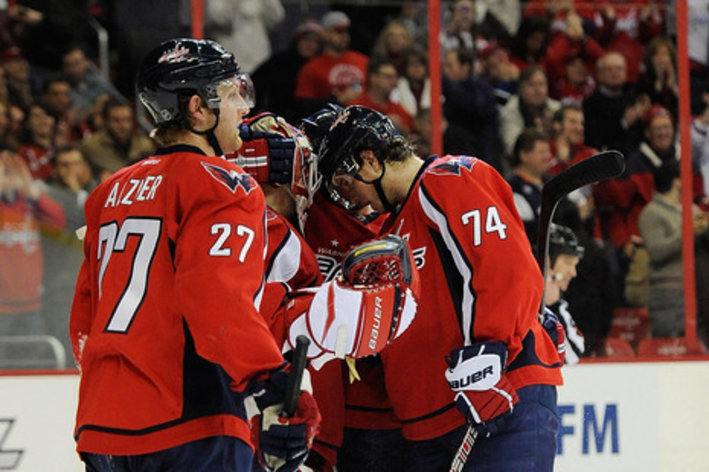 Adam Oates sliced through the conjoined hip that was Karl Alzner and John Carlson, and got the results and flexibility he had in mind when he did so.

The Good: It's difficult, sometimes, to write about the thing that Karl Alzner does well because the things that Karl Alzner does well don't usually lend themselves to narratives. He plays big minutes, he plays tough minutes (as the usage chart above details) and he handles them, regardless of his partner (primarily Mike Green in 2013 after a couple of years of being virtually inseparable from John Carlson). And he always shows up for work.

Like many of his teammates, Alzner rebounded from a rough start to the season (more on that in a minute) to salvage a pretty decent campaign. He blocked a lot of shots (somewhat contrary to orders, and in part because the Caps struggled with puck possession) and continued to defend effectively and cleanly - Alzner was one of 15 NHL defensemen this season to play more than 1000 minutes and rack up fewer than 15 penalty minutes.

And while it's a far-too-small-for-our-liking sample, Alzner was superb in the playoffs (as noted above), shutting down Ranger big guns, excelling on the penalty kill and helping to tilt the ice at five-on-five - his individual Shots-, Fenwick- and Corsi-For percentages all led the entire team.

The Bad: Karl Alzner is a thinker and, at times, an overthinker. That certainly seemed to be the case early on in 2013, as he and his teammates adjusted to a(nother) new coach, and he'd be the first to tell you so... repeatedly. Eventually, things started coming more naturally, but that start... yikes. In the first ten games of the season, Alzner was on the ice for 17 goals against (nine of which came on the power play). He hit another rough spot (20 goals-against in 14 games) for three weeks in March, and those two stretches - 24 games, half the season - accounted for more than two-thirds of the goals for which he was on the ice during the regular season.

And you'd like to see a bit more from Alzner at even-strength, but given the game he plays, he's very much at the mercy of his teammates for stats both traditional and advanced. Oh, and Twitter lost a true superstar when Alzner hung up his thumbs during the lockout.

The Discussion: Alzner is a restricted free agent this summer - what's he worth in dollars and term? Is he a legitimate top-pairing defenseman on a team that aspires to be a contender? What would it take for you to give him a "10" next year?

More on Alzner's season: Peerless: Karl Alzner, By The Tens