What to Expect When You're Expecting Wins

How the Washington Capitals are keeping D.C.-area cardiologists busy

Share All sharing options for: What to Expect When You're Expecting Wins

What are the odds?

We watch sports, in part, in the hopes that we might see something on the ice, field or court that's never happened before. If every game was more or less the same, we'd stop wasting our time and just watch Vince Vaughn movies instead.

Unfortunately, "win expectancy" based on game situations hadn't really made its way into hockey... until now. The indispensable ExtraSkater.com has added to its awesome bounty win expectancy charts that graph the "[l]ikelihood of winning game based on score difference (up to 2), time remaining, and whether teams are home or away." (The charts are updated in real-time during games, making them all the more amazing.) And while there may be some adjustments yet to be made, let's dive right into it with the Caps' top-10 most improbable outcomes of the season so far. These games are ranked by win expectancy of the eventual loser. Fun! And we'll include the charts because they're pretty and some of them look like Rubin vases. Away we go: 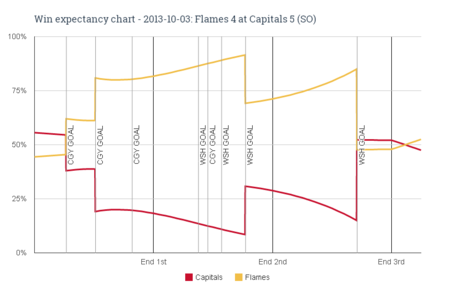 The Caps fell behind 3-0 and 4-1 halfway through their home opener before clawing their way back and winning in a shootout. Calgary's win expectancy prior to Alex Ovechkin's second goal (the Caps' third): 91.5%. 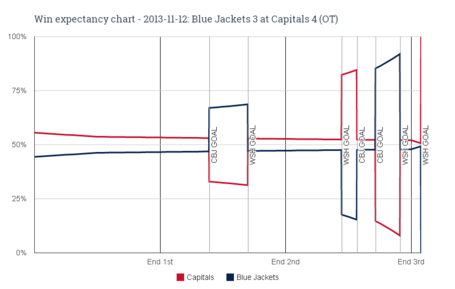 A back-and-forth affair, the Jackets went up 3-2 late in the third, but Mikhail Grabovski's 100th career goal with 1:45 left tied the game, and Marcus Johansson quieted the haters as he fed for the overtime game-winner. Columbus's win expectancy prior to the Grabovski goal: 91.6%. 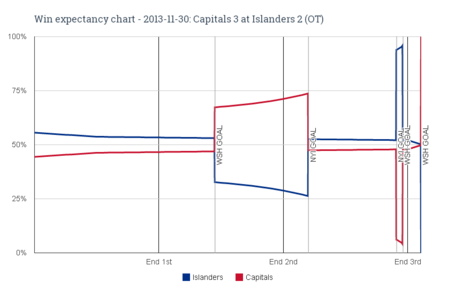 (Now these really start to get juicy.) Tomas Vanek put the Isles up 2-1 with under two minutes left and then Mike Green got whistled for interference. Game over? Nope. Jason Chimera and Nicklas Backstrom combined on a shorthanded goal with 49 seconds left, and then Ovechkin Ovechkin'd in overtime. New York's win expectancy prior to the Backstrom goal: 95.9%. 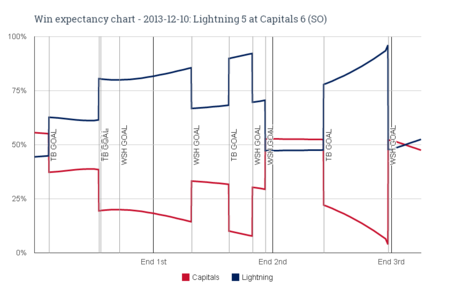 The Caps trailed by three early at home, cut the lead to one before falling behind by two again, tied it up on Ovechkin's hat trick goal before letting the Bolts regain their lead... and then The Captain's fourth of the night sent the game to overtime with 33 seconds left on the clock. A Troy Brouwer goal would be the difference in the shootout. Tampa Bay's win expectancy prior to Ovechkin's fourth goal: 96.1%. 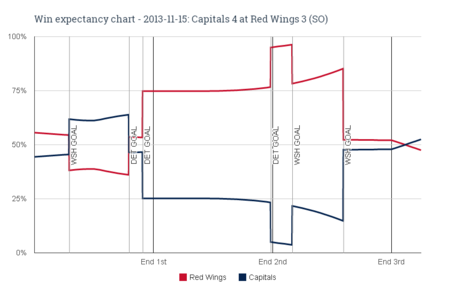 Down two goals heading into the third period in Detroit, the Caps got an Ovechkin goal three minutes into the frame (his name sure is showing up a lot on this list, isn't it?) and Michael Latta's first career goal tied it with just over eight minutes left. Backstrom's shootout goal sealed the deal. Detroit's win expectancy prior to the Ovechkin goal: 96.3%. 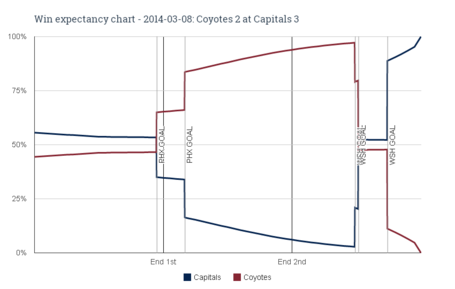 Remember this one? Down 2-0 in the third at home, the Caps ripped off three goals in 5:02 - first Karl Alzner, then Brooks Laich, and finally Brouwer. They didn't even need overtime in this one. Phoenix's win expectancy prior to the Alzner goal: 97.2%. 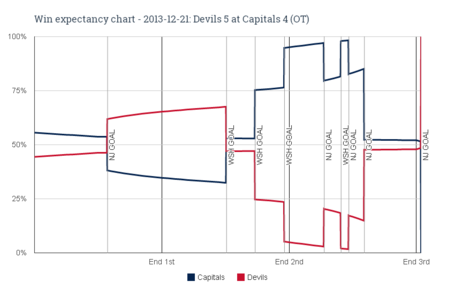 Notice anything about the first six games on the list? Yep, all Caps wins. Not this one. With 11 minutes left, on home ice, the Caps held a 4-2 lead (Ovechkin had staked them to that lead about a minute earlier). Within two-and-a-half minutes, the game was tied, and then, in overtime, it soon wasn't. Washington's win expectancy prior to the Devils' third goal: 98.3%. 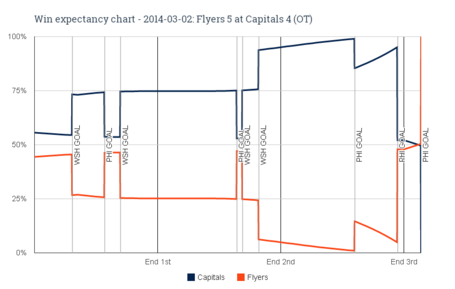 In all likelihood, this is the game that will be looked at as the turning point in the season. Coming off one of their best wins of the season in Boston (and four-straight wins overall), the Caps had a 4-2 lead well into the third period before a Dmitry Orlov boarding major put the Flyers on a five-minute power play. They scored once, and then tied the game with just over a minute left. The Flyers won in overtime, and the Caps are just that Phoenix game above away from being 0-6-0 since. Washington's win expectancy prior to the Flyers' third goal: 99.0%. 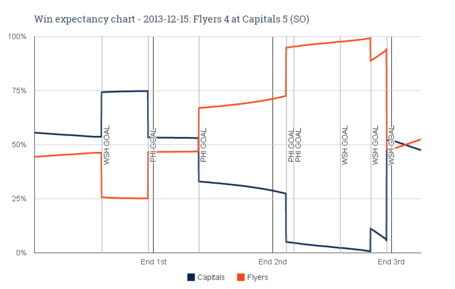 For the second time in less than a week (see the Lightning game above), the Caps were able to erase a three-goal deficit on home ice and win. This time around, they trailed by a trio of tallies with nine minutes left in the game, but got goals from Green and Orlov to cut the lead to one and set Ovechkin up for yet another dramatic performance... and he wouldn't disappoint, tying the game with 48 ticks left. Five minutes and a shootout later the Caps had two points. Philadelphia's win expectancy prior to the Caps' third goal: 99.1%. 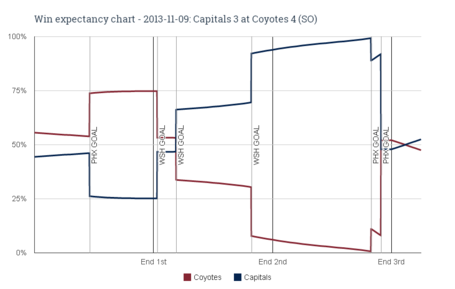 The Caps and Coyotes played twice this season and both games featured pretty absurd late-game comebacks. Unfortunately, this one didn't go the Caps' way as they gagged up two goals in the last three-and-a-half minutes of the game and were put out of their misery in the shootout. How unlikely was this unlikeliest of losses? Washington's win expectancy prior to the third 'Yotes goal: 99.3%.

There's a reason they call them the Cardiac Caps - 11 times in their 67 games, one team had a 90% chance or better of winning the game, but they didn't. There's also a reason they play the games; because anything can happen. It just usually doesn't. But we watch, just in case.