Share All sharing options for: A Blueline That's Hard to Defend

In a season full of surprises (pleasant and mostly otherwise), perhaps the least startling reality that has visited itself upon the 2013-14 Washington Capitals is that they've lacked adequate depth on the blueline past the top-three of John Carlson, Karl Alzner and Mike Green.

Adam Oates acknowledged as much last summer (unable to disagree with the notion that he could use another top-four defender), and lord knows we've beaten that dead horse to dust. But here we are 65 games into the season with the Caps facing a steep uphill climb to return to the playoffs, and the issue remains unresolved and as problematic as ever.

So it's easy to understand Caps fans' frustration and onlookers' bewilderment when the trade deadline came and went without a single move made to upgrade the position; everyone was forced to believe that George McPhee wasn't bluffing when he said not two weeks earlier "we’re sitting pretty good with what we have right now," a notion he affirmed after standing pat with an unsurprising "I like where we’ve gone with our blue line" and "the pieces are there."

But while there were upgrades available (though no real impact rearguards moved at the deadline), one can fairly wonder how much of a difference one addition would have made. After all, this is a team on which those top three defenders mentioned above - the guys we weren't supposed to have to worry about - have a combined five-on-five goals-for percentage of 45.6%, with Carlson leading the trio at 46.8% and a shots-for percentage on the wrong side of fifty.

How much impact can changing one person have on a blueline which struggles top-to-bottom? The answer is potentially "quite a bit"... if that one person is the man coaching it. And in this case, that person is assistant coach Calle Johansson, hired to run Oates's defense despite having almost no coaching experience - the press release announcing his hire was long on NHL experience and accomplishments, but noted only that he was "an assistant coach for Frolunda of the SEL during the 2006-07 season" when it comes to that aspect of relevant work experience. (Because you're intensely curious, Frolunda finished fourth from the bottom in the League in goals-against that year.)

Johansson's inexperience isn't in and of itself damning, but what's happened to the Caps' blueline since he was hired is. And to be sure, this is very much an indictment of Oates as well, whether as a direct result of the implementation of his system, or by virtue of the fact that he hasn't seen fit to make necessary adjustments or ultimately changes.

Most troublesome of all - data-wise, at least - is the high volume of shots the Caps are allowing. Take a look at the trend in five-on-five shots-against per sixty in close situations over the past seven seasons (via Stats.HockeyAnalysis.com, numbers through the weekend): 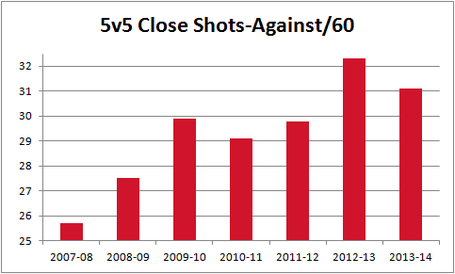 The raw numbers might not seem like much because they're not (and the chart emphasizes what we want to emphasize), but that's still a 7% increase since 2010-11 and the two worst seasons on the chart have come since Oates/Johansson arrived. Interestingly enough, while shots on goal have gone up, the rate of shot attempts against hasn't changed much - the Caps' Corsi-Against/60 in close situations over the past four seasons has gone from 56.1 to 56.6 to 57.9 to 56.9. It's just that more shots are getting through these days, likely the result of Oates de-emphasizing shot-blocking (to wit, the Caps' Fenwick rates look a bit more like the shots-on-goal rate than Corsi rates). Regardless, at the same time that shots-on-goal against have increased, shots-for have bottomed out, and the result is a brutal trend in shot differential: 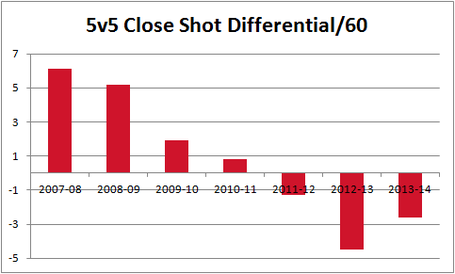 To paraphrase our pals at RMNB, for all of the talk of Bruce Boudreau's "firewagon hockey," the team was better at shot suppression then than they have been since, and the shot differential trend has been similar (and worse). (Additional h/t to Neil Greenberg on the shot differential point.) As King's head coach Darryl Sutter recently noted:

"The big thing in today’s game is you have to be able to forecheck and backcheck, and you have to have the puck. You can’t give the puck up. We don’t play in our zone, so there’s not much defending."

"I’ve coached in three decades now and this stuff where they said Marian had to play in Jacques’s system is a bunch of bull-crap. The game’s changed. They think there’s defending in today’s game. Nah, it’s how much you have the puck. Teams that play around in their own zone think they’re defending but they’re generally getting scored on or taking face-offs and they need a goalie to stand on his head if that’s the way they play."

So shot suppression has been an issue, even if it hasn't been quite as large an issue as might have been suspected (and there's little reason to believe that the Caps are limiting the number of tough shots their netminders are facing). Shot differential most certainly is and has been a large problem - there's only so long a team can beat its percentages like they did last season with a 1014 PDO that cushioned the impact of possession numbers around 48%. This year, the team finds itself with similar possession stats (and they're really not getting any better), but a negative goal differential as their PDO has dropped to a far more sustainable 1001. 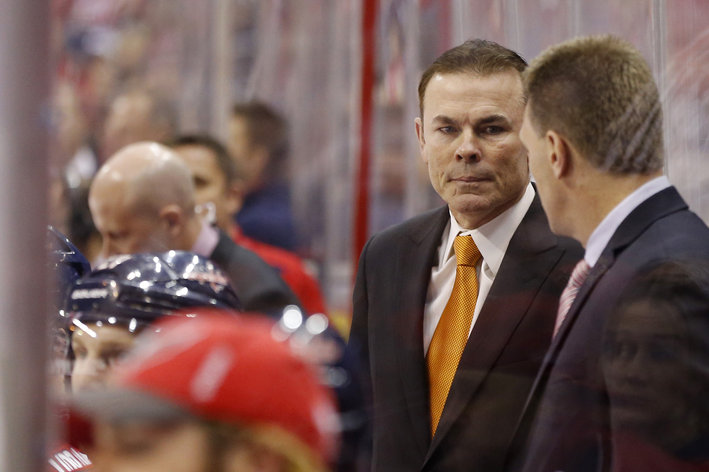 George McPhee has made a couple of comments recently that give fans some insight into how the organization sees the team. Comments that don't exactly align with what the team has done on the ice, or how the fans see the team.

But who's responsible for the drop-off in puck possession? There's plenty of blame to go around - from the personnel decisions to the systems implemented to the players' execution and everything in between. If the question, however, is reframed not as "who" so much as "where," the answer is a bit more clear - it's the defense.

Strategically, Oates and Johansson's defense is a largely passive and conservative lot, presumably by design (though no doubt a lack of experience and/or confidence feeds into this). Their gap control is generally poor, and they rarely challenge opponents at the blueline, likely afraid of getting beaten wide. They don't reverse the puck behind their net to facilitate breakouts and are coached not to carry the puck out of the zone (though perhaps there's a point of contention here between Oates and Johansson), favoring chips off the boards and glass that alleviate pressure but usually result in a change in possession and the puck coming right back into the zone.

Of course, it's not just a series of tactical choices that have the Caps where they are, as the personnel isn't ideal (as we discussed at the top), and the mental mistakes have more or less kept up with the high pace of the physical ones. But let's take a look at the four blueliners who have been in D.C. since 2009-10 and see how they've come along during that time: 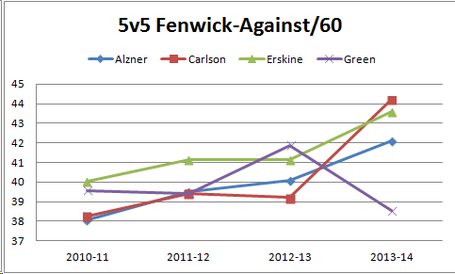 Largely independent of the Connor Carricks of the world, the Caps' top pairing of John Carlson and Karl Alzner are yielding far more unblocked shot attempts towards the Caps' net than they were last year. For Carlson, the increase is nearly 13% more. For Alzner (who has spent a decent amount of time away from Carlson and with Mike Green), it's a 5% increase. And, as you might suspect, there hasn't been a corresponding rise in Fenwick-For, so the result has been a dramatic drop in Fenwick percentage: 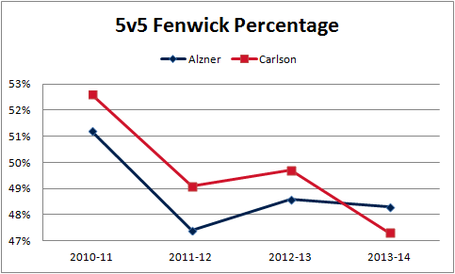 To be sure, this isn't just about two players, and one might reasonably question how much impact on his own possession metrics a "stay-at-home" defender like Alzner really has. But ask yourself this question - are these two young (but not so young) blueliners progressing adequately? When you watch Alzner, is he where you thought he'd be 300-plus games into his NHL career? Carlson and Alzner were playing the hard minutes back in 2010-11 - why were they playing them so much better then?

As for Green - whose underlying numbers are actually better this year than they've been in years - he's benefited from playing alongside Dmitry Orlov who pushes the limits of Oates's conservativism, and the results have been great in terms of possession... but have often been quite the adventure in decision-making and defending (this is certainly one place where the numbers say one thing and the eyes tell another story entirely). And yet the Caps are outscoring opponents when the two are on the ice together, which is more than you can say for just about any defensive pairing the Caps have thrown out there with any frequency. Perhaps this "carrying the puck out" stuff isn't all bad after all?

And that brings us back to a critical point - offense often starts in the defensive zone. Lament the Caps' predilection for dump-and-chase over controlled carries on zone entries and their preference for position over possession, but the reality is that when the team spends 30 or 35 seconds clearing the defensive zone and rarely does so with possession of the puck, their options are limited, dump-and-change as often as dump-and-chase. The Caps aren't a good team through the neutral zone, and there's reason to believe that it starts on the back end.

It's also worth noting (and this seems to be as good a spot as any to do so) that, contrary to the conventional wisdom in some circles, public proclamations and the implications of the team's biggest deadline move, goaltending hasn't been the problem - the team ranks 20th in five-on-five goals-against, but a much more respectable 14th in five-on-five save percentage. This is about shot volume.

Ultimately, most of this evidence presented here is circumstantial and/or anecdotal, but this isn't a court of law. It should be obvious to those who have watched this team over the past 14 months that the defense isn't good enough to make this team any more than a fringe contender for a playoff spot, and that's not entirely due to the personnel they've deployed there (and we haven't even touched on the penalty kill, where the Caps are comfortably dead last in the NHL in Fenwick-Against/60). As the saying goes, those who can, do; those who can't, teach. Calle Johansson and Adam Oates definitely could and did... and perhaps teaching isn't coming as easily.

The Caps' blueline - once again young with players like Orlov, Carrick, Nate Schmidt and others on the way behind "old-timers" like Green, Alzner and Carlson - needs direction and a system in which they can succeed, and there's plenty of reason to believe that's not possible right now. At a minimum, the organization should look into replacing Johansson on the bench with someone who can get the D-corps' collective development back on track and set this team up to be at least as good as the sum of its parts. Because right now it isn't, and the blueline and how it's being coached is the main reason why.