[Note: The majority of the legwork for this post was done by Corey Sznajder, who is manually tracking all 1230 NHL games from last season. Read more about Corey here and help fund his work here.]

Over the course of the off-season we have taken multiple looks at zone entries; first with a comparison to Barry Trotz's former team, the Nashville Predators, and then again with an in-depth look at the zone entry tendencies of the Capitals' top trio. Using the on-ice data acquired by our own Muneeb Alam, we are able to get an understanding of who is responsible for driving zone entries and whose zone entries appear to be more valuable than others.

"A player's responsibility for advancing the puck puck through the neutral zone can be calculated by dividng the number of times he personally pushes the puck into the offensive zone by the number of zone entries his team has when he is on the ice. His success in those entries can be assessed by looking at what fraction of his individual zone entries are with possession rather than by dumping the puck into the zone" (Tulsky, Detweiler, Spencer, and Sznajder).

Applying the above to last year's Caps and plotting it gives us the following visualization of player involvement in zone entries: 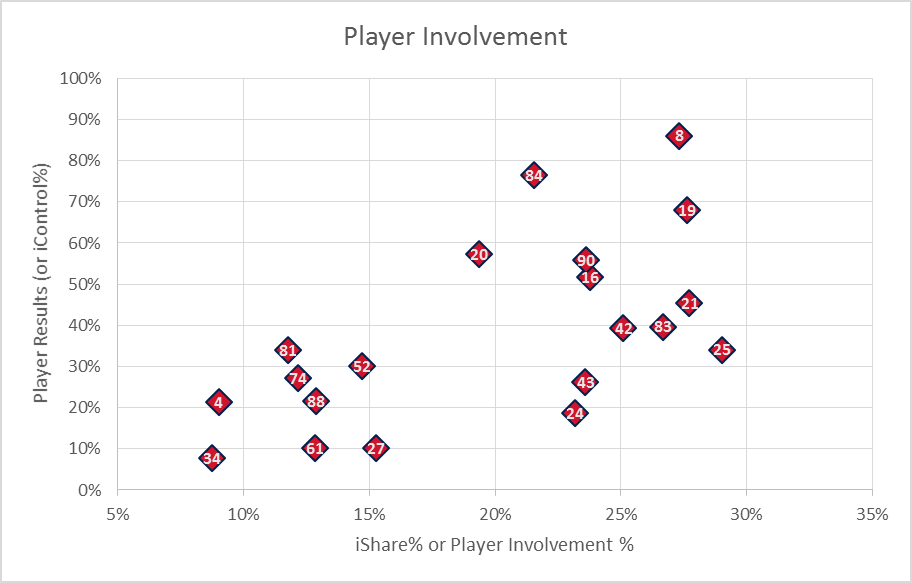 There are a lot of interesting things going on in this graph, the first being the tight grouping of defensemen, with no individual blueliner responsible for more than 16% of the team's on-ice zone entries (and here we're talking about all non-line change entries, whether carries, dump-ins, chips, etc.). The data would seem to confirm what we'd heard about part of Adam Oates's philosophy for the defensemen, namely that they were instructed to give the puck up to forwards as soon as possible (as opposed to carrying it themselves).

Six forwards topped 25% of their on-ice zone entries, individually, but only two of them did so with control for more than half of those entries - that's a lot of pucks being given up upon entry (more on that later). Overall,the Caps have (well had) six forwards that entered the offensive zone with control for more than 50% of their individual entries led, unsurprisingly by Alex Ovechkin. 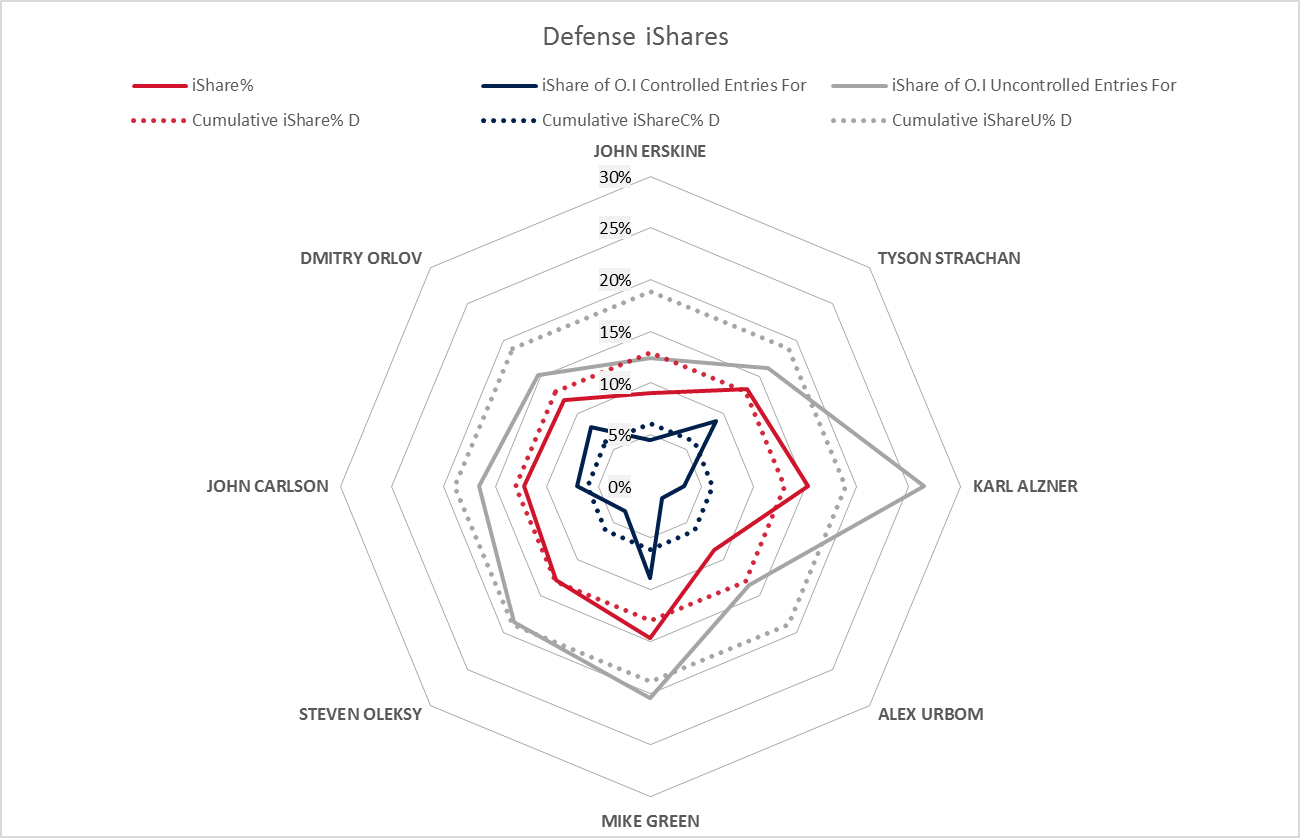 You can see that Karl Alzner had the highest iShare% of the rearguards, but almost none of them were under control (that's the gap between his blue and gray data points). By contrast, Mike Green, John Carlson and Dmitry Orlov all had much smaller spreads between controlled and uncontrolled percentages. Alzner accounts for over 25% of the uncontrolled entries he is on the ice for, a pretty significant number that indicates a predisposition for playing it safe (which is also evidenced by about 90% of his individual zone entries being uncontrolled). Alzner's numbers here bring to mind something Barry Trotz said a little ways back with regards to using statistical analysis to help identify and adjust inefficient player tendencies:

"I found out, through stats, that we had a defensemen who would dump a little more often than he probably needed to. So then we really tracked it, on a one on one basis, and found that he had more time to make better quality plays." (Barry Trotz)

There is no reason to think that Trotz couldn't (and won't) encourage an adjustment in Alzner's game similar to that of the unnamed Nashville defensemen.

You know the drill: 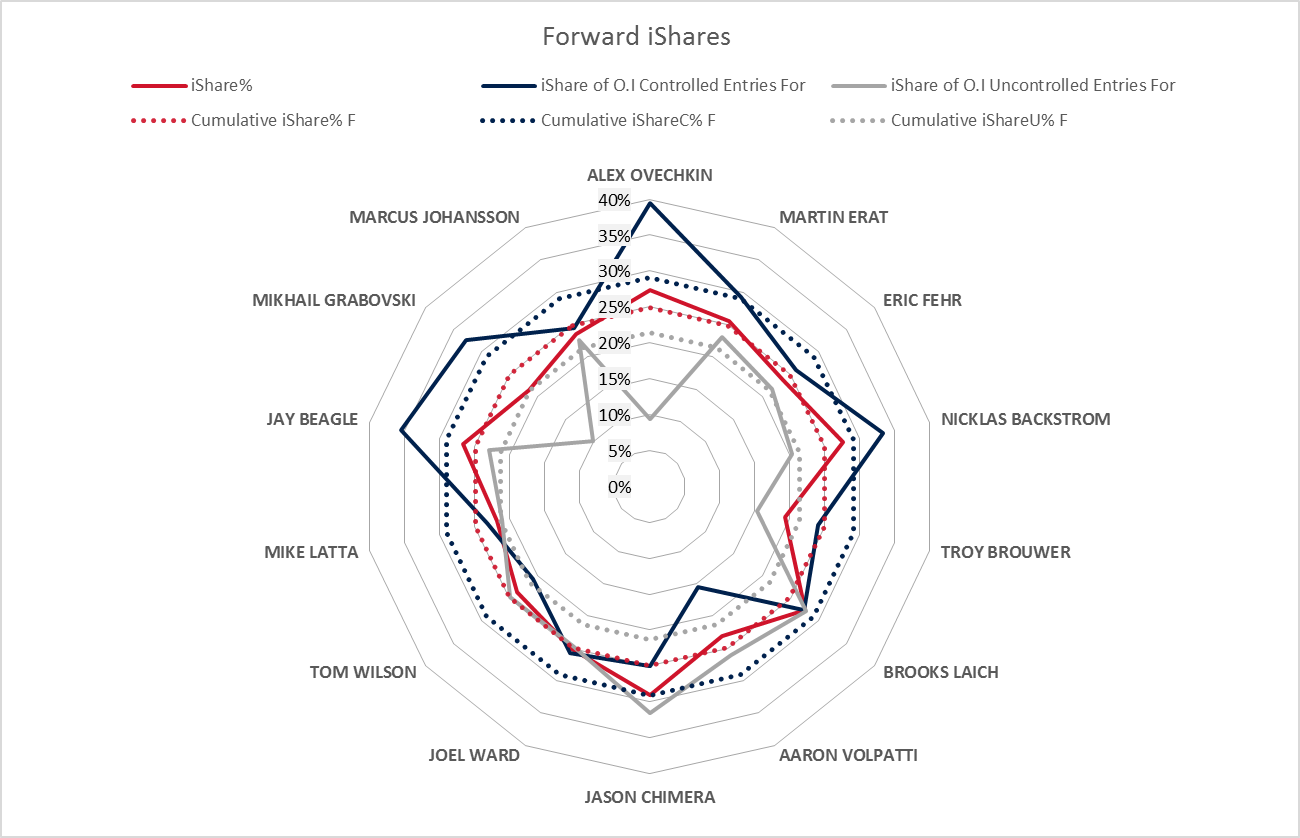 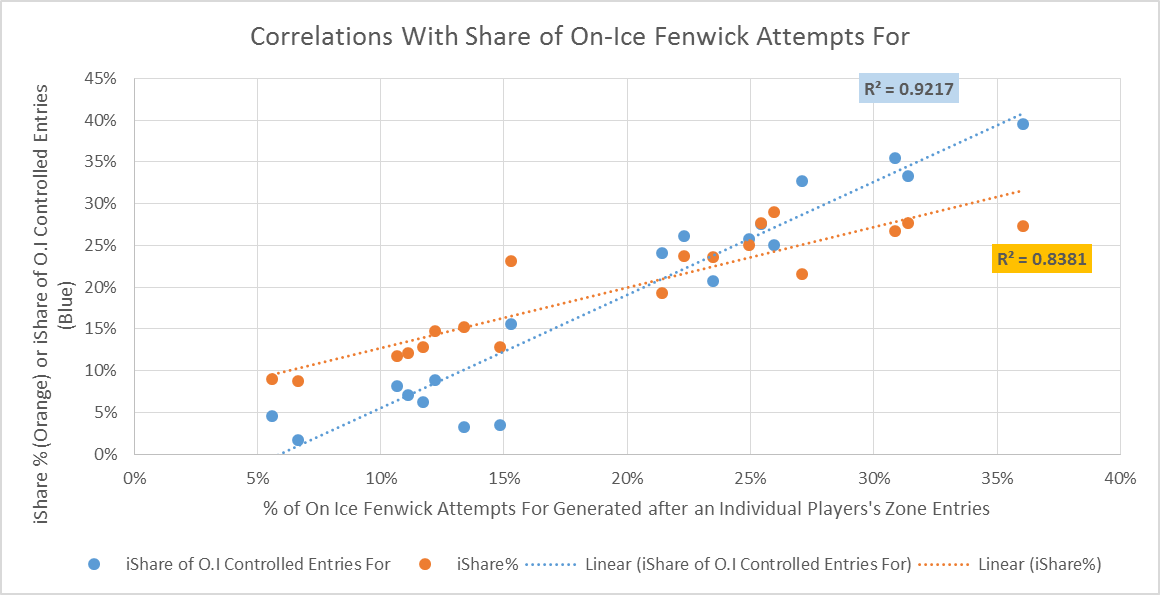 There is a tighter correlation in the blue data series than there is in the orange one, again demonstrating that a controlled entry is more valuable than an uncontrolled one. By further looking at the orange data set from the graph above we get a better understanding of which players are getting the most out of their zone entries. 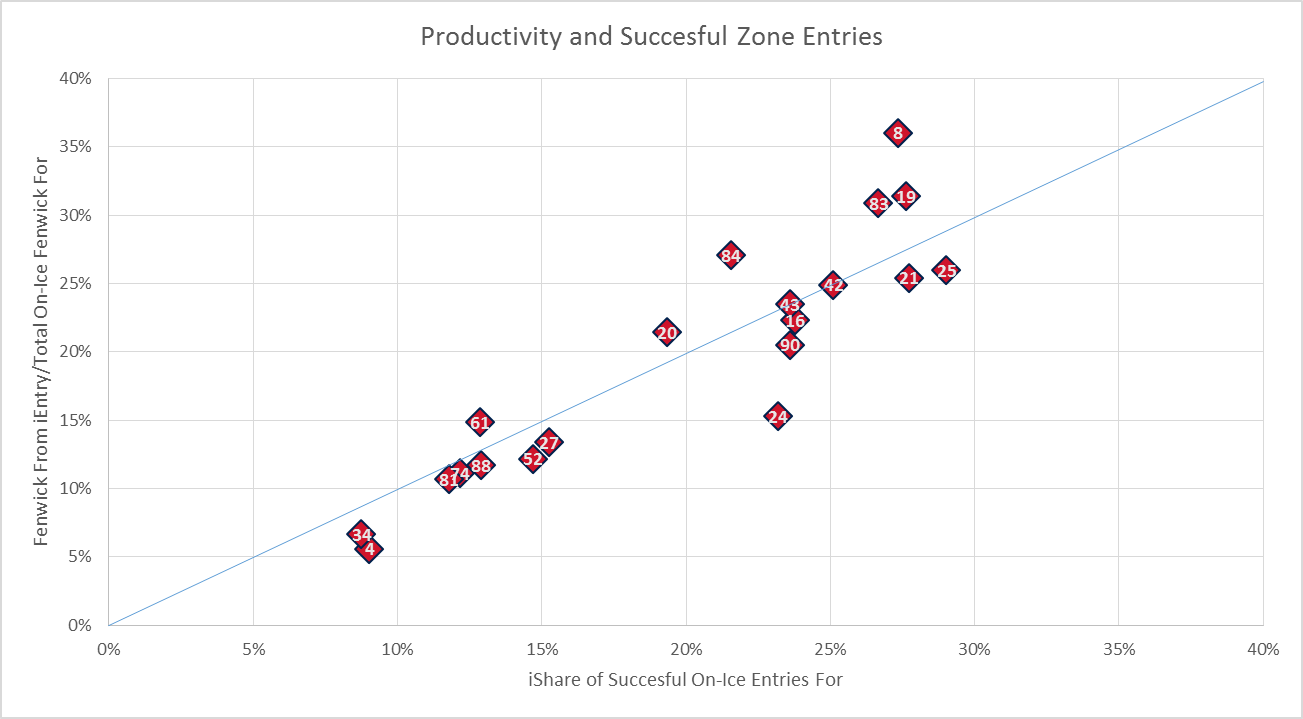 Players with a high percentage of their entries being from control (like Ovechkin, Nicklas Backstrom and Grabovski) are more efficient at generating Fenwick attempts than their teammates. Inefficient distribution of zone entries leads to less shot generation which in turn leads to fewer goals. Ovechkin and Chimera both were responsible for a large percentage of their team's entries when they were on the ice, but they had very different tendencies in those entries and very different results, as noted above. By looking at WOWY (with or without you) zone entry numbers for these two players, we can try and infer the type of impact two players at opposite extremes can have on their linemates' neutral zone offense. 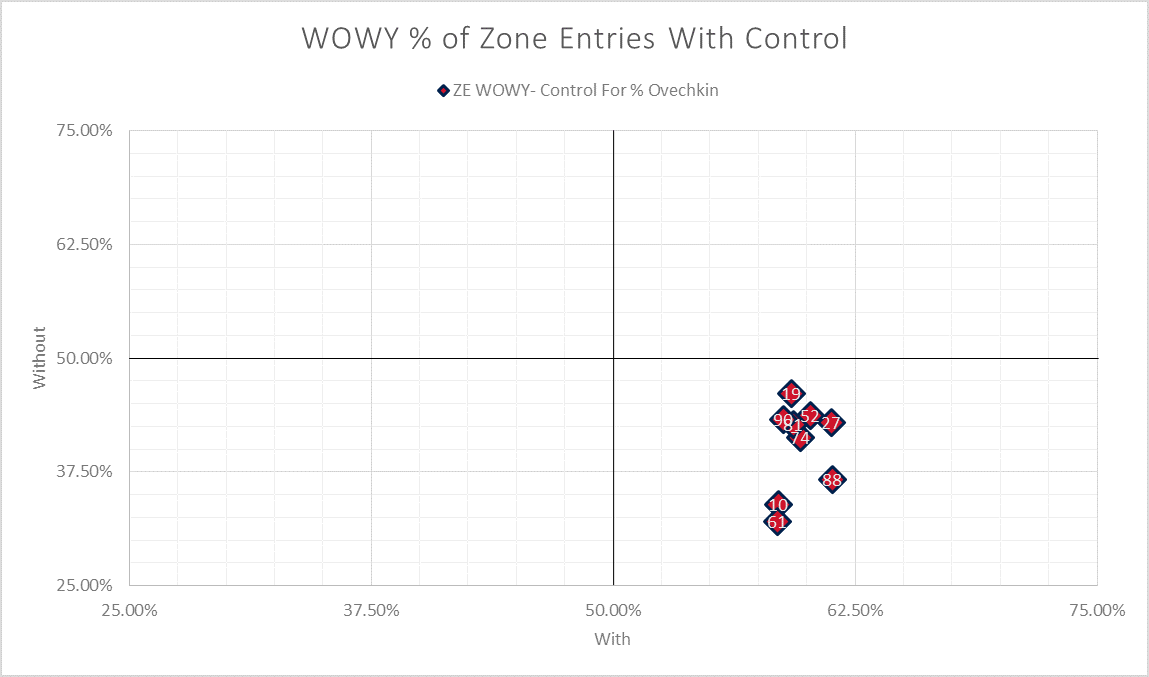 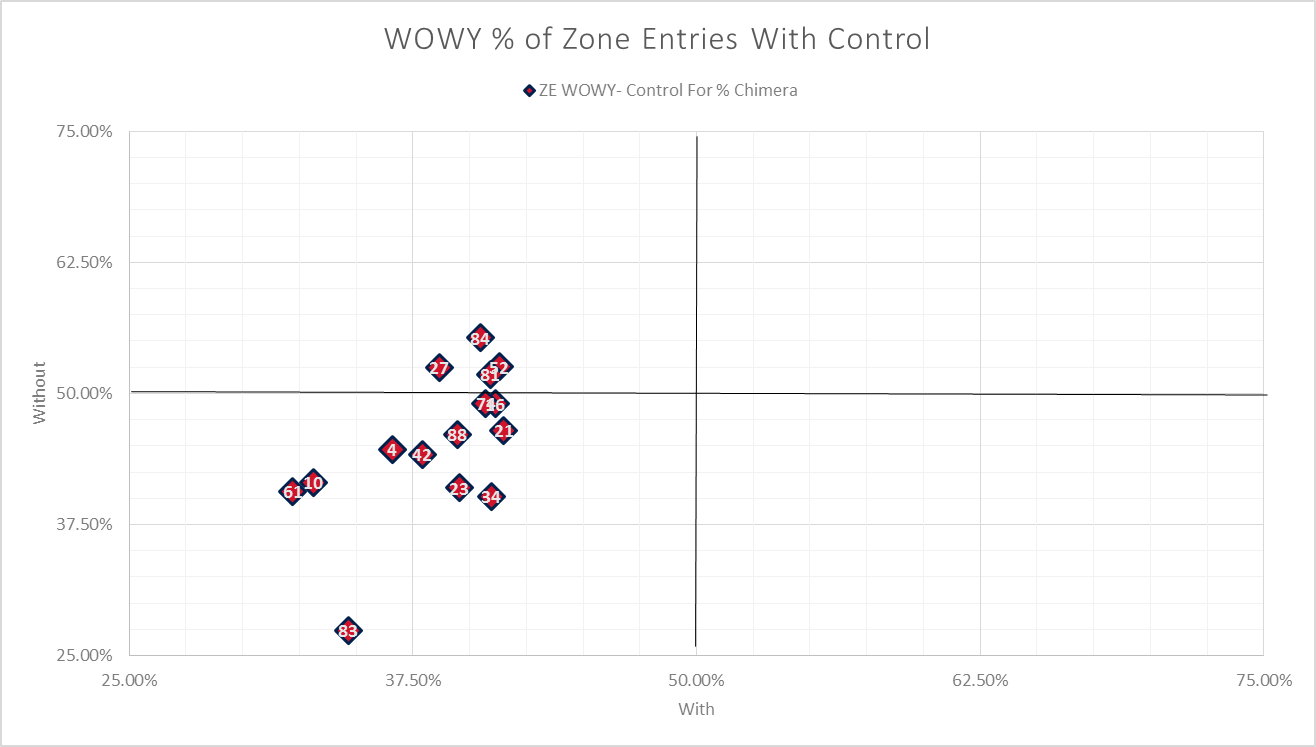 Chimera and Ovechkin are both drivers of zone entries when they are on the ice, but in very different ways. Due to the extreme nature of their entries (86% of Ovechkin's entries with control, 66% of Chimera's entries without control) they have a big impact on their line-mates' entry type distributions. Chimera and the rest of the third line had a very successful 2013-2014 NHL season, but it wasn't due to their effectiveness at entering the zone or their ability to possess the puck (not to say that they did not do it right sometimes... but the type of chip-and-chase game we talked about a bit yesterday was more their style). When Chimera was on the ice for a zone entry the Capitals' had a Fenwick shooting percentage of 7.4%, almost a full two percentage points higher than the team as a whole (5.5%). When Ovechkin was on the ice for zone entry, he and his teammates had a Fenwick shooting percentage of 3.6%, again illustrating that outcomes (goals) can be deceiving.

As has been the conclusion with each of our zone entry posts up to this point, the Capitals would be well served to enter the zone more often and with more control next season. The best and easiest way to accomplish that task might simply be to have certain players make a concerted effort to enter the offensive zone more often than they were before.