Under the Microscope: The Capitals Top Line and Zone Entries

Could the Capitals be getting more out of their top line?

Share All sharing options for: Under the Microscope: The Capitals Top Line and Zone Entries

[Note: The majority of the legwork for this post was done by Corey Sznajder, who is manually tracking all 1230 NHL games from last season. Read more about Corey here, and support his work here.]

Back in June we took a look at how the Washington Capitals compared to the Nashville Predators with respect to zone entries, and what that might mean for the Capitals moving forward. Partially due to the limited number of games available, we kept our focus at a somewhat high level - lines and pairings - when analyzing zone entry patterns and effectiveness. Thanks to the hard work of Corey Sznajder, there may now be enough additional data to make some preliminary assessments of individual players' entry patterns and effectiveness. (Those interested can read more about the methodology at the bottom of the post.)

To start our zone entry analysis of the top line, let's look back at what we said about them in June:

Washington forwards carry the puck a lot, and that's great. That being said, Washington forwards were less efficient than their Nashville counterparts at generating Fenwick attempts once they entered the zone (efficiency is a term that is more frequently associated with basketball than hockey, but I think that it can be used here). So, for example, despite carrying the puck in for the majority of their entries, the Capitals' top line was only slightly by better than the rest of the team at possessing the puck last season, which is rather curious. Regardless, if 2013-14 was any indication, the Caps' top line may not carry the puck as often next year as they did last season, but they should be more efficient at generating shot attempts when they do. Seriously though, the top line really should carry the puck in as often as possible.

The statements above still hold water, the Capitals are going to look different next year. Thanks to Corey's data, and some wizardry from our own Muneeb, we can look at entry events for which individual players were on the ice:

It appears that a large portion of the problems that the first line encountered last year can be attributed to their inability to limit the shot generation of their opponents. The amount of Fenwick attempts allowed per opposition carry is well above the league average of 0.58. The defensive system that the Capitals employed last year made everyone (on the Caps) look bad, but that does not mean a new system will completely fix their flaws.

Digging deeper at the offensive end of the ice, here's a look at how the Capitals did when Ovechkin, Backstrom, or Johansson was responsible for the zone entry.

The top line had a reasonable distribution of player entries (iShare%) given the varying degrees of success each player had. It makes sense that Johansson was tasked with fewer entries than his linemates, given the relative trouble he had when he was responsible for doing so. And, as you can see above, Marcus Johansson was significantly less effective than both Ovechkin and Backstrom at turning entries into Caps shot attempts. Of the thirteen Capitals' players who had a minimum of 100 entries in the new data set, Johansson ranked 10th in Fenwick-For-per-Entry and 13th in Fenwick-For-per-Carry. That's... not good. And it's an even bigger problem if we accept the notion that Alex Ovechkin is at his best when someone else is carrying the puck and he's driving the net or finding space in the offensive zone.

The Washington Capitals will see a lot of competition for ice time among the top-nine forwards. Should Marcus Johansson be worried?

Over the course of a full season, Johansson's lack of shot generation would likely result in the team scoring two-to-four fewer goals than if another player had been responsible for the entry. That doesn't sound like much, but those things add up. And while there's no clear connection between Fenwick shooting percentage and the individual responsible for the zone entry, it's interesting that the Capitals did not score a single goal off of the 70 Fenwick attempts they generated from Johansson's five-on-five entries last season (they scored eight on 142 Fenwick events generated by Ovechkin entries and five off of 119 from Backstrom). This doesn't  mean that Johansson isn't a good player or even that he doesn't belong on the top line, but his skill set (and those of his linemates), it would seem, is best served when he allows his running mates to make a large share of the entries.

Generally speaking though, It appears that the top line does much of what you would want to see from your top offensive unit: they enter the offensive zone more often and with more control than their opposition. That being said, they didn't do a good job defensively, and they were also unlucky:

The top trio had a low conversion rate-for and a high conversion rate-against (which led to a skewed goals-for percentage), but there's little evidence to show that an individual player has any meaningful impact on his on-ice save percentage. Expect these numbers to look better next season. A new defensive system combined with two big money acquisitions should help right the ship defensively... and if that happens without reducing the offensive output of the top line the team will be in a good position. There are very high expectations on the Capitals' top line and they might very well be able to meet or even exceed them.

A Pair of Successful Top-Line Entries

Since we're talking about the top line and zone-entries, let's take a look at a couple of text-book examples. First up, a quick counter against St. Louis. Following a face-off win by Backstrom and subsequent shot attempt by  Ovechkin, the Blues gained possession of the puck near the top of the defensive zone (circled in blue): 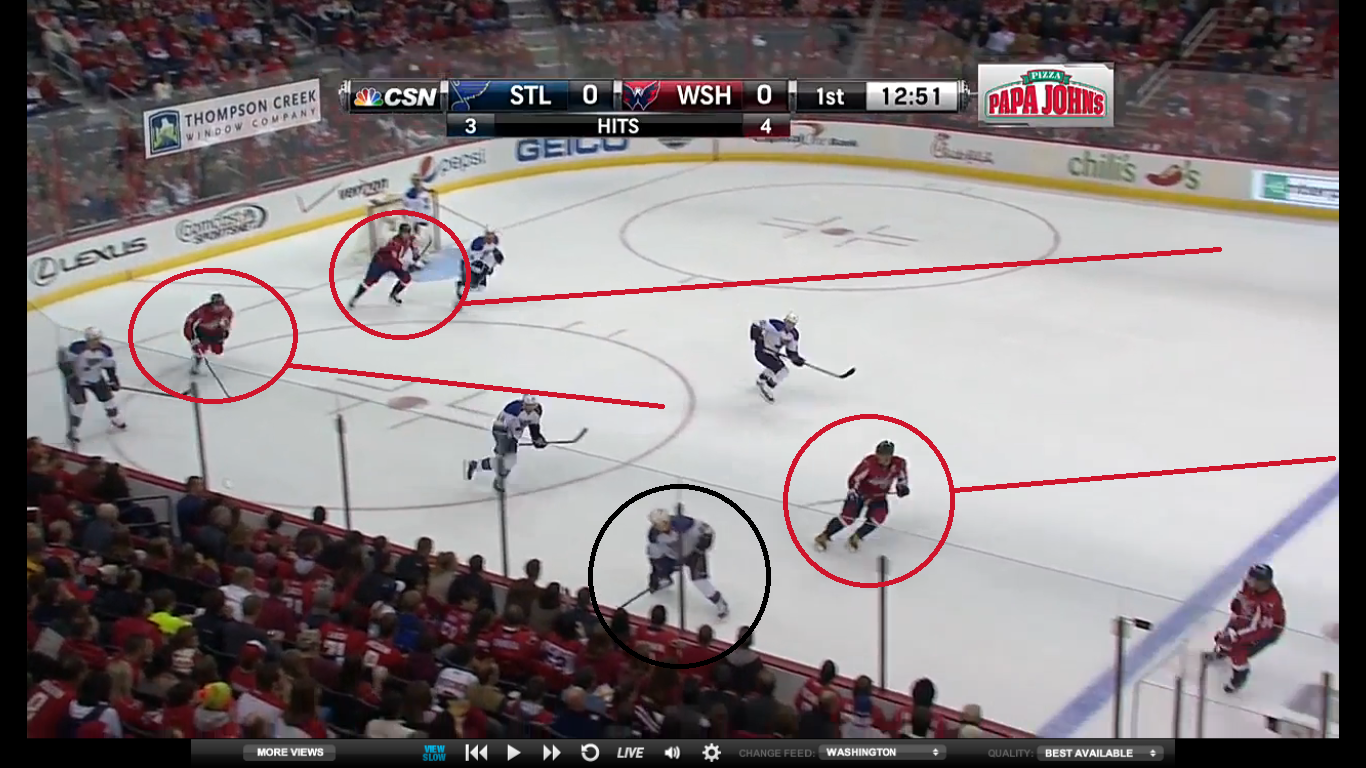 The Blues' player elects to make a no look backhand pass through the middle of the ice... for some reason. The pass results in a change of possession, leaving Steve Oleksy (circled in blue) with the puck and Backstrom still clearing the zone (notice Backstrom and the tightness with which he is being marked in the red circle): 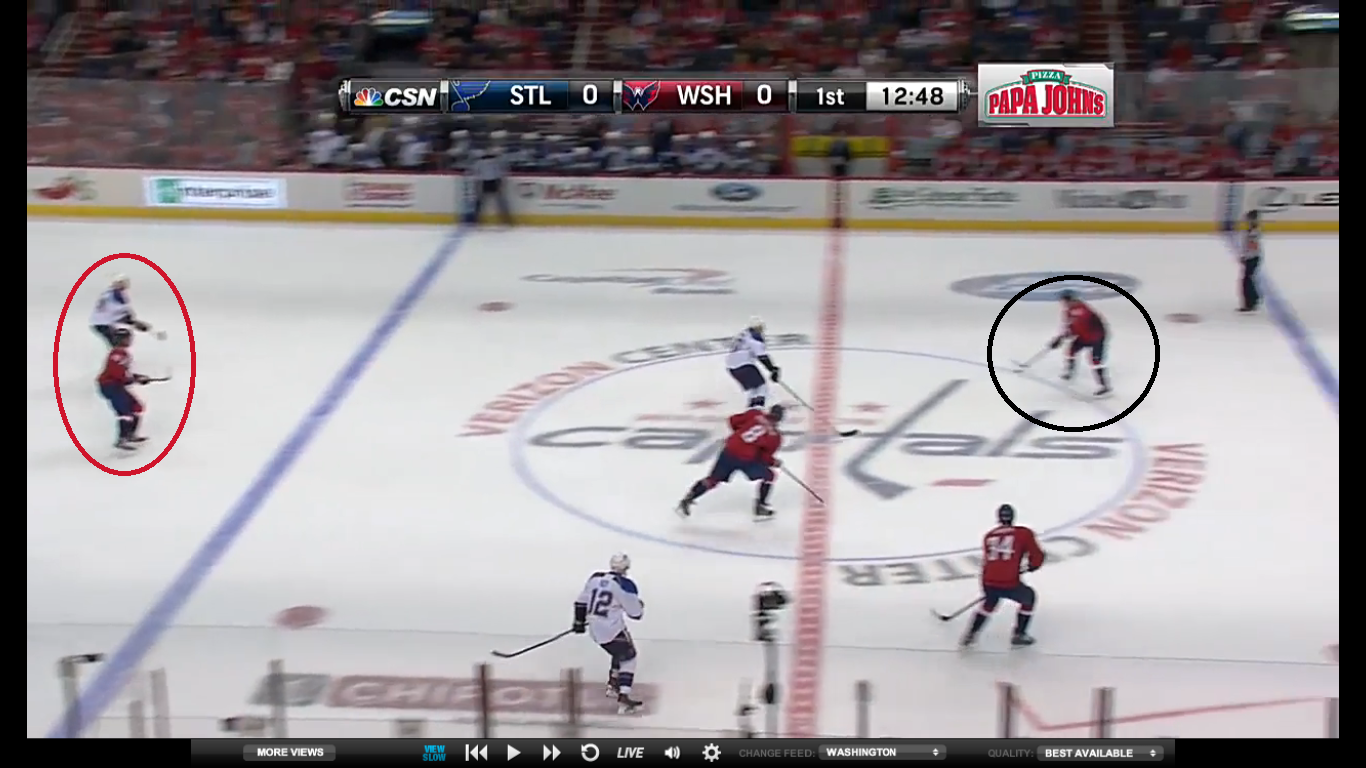 Olesky makes a smart pass to Backstrom, who deftly puts the puck into space behind him for the streaking Ovechkin, headed in the opposite direction: 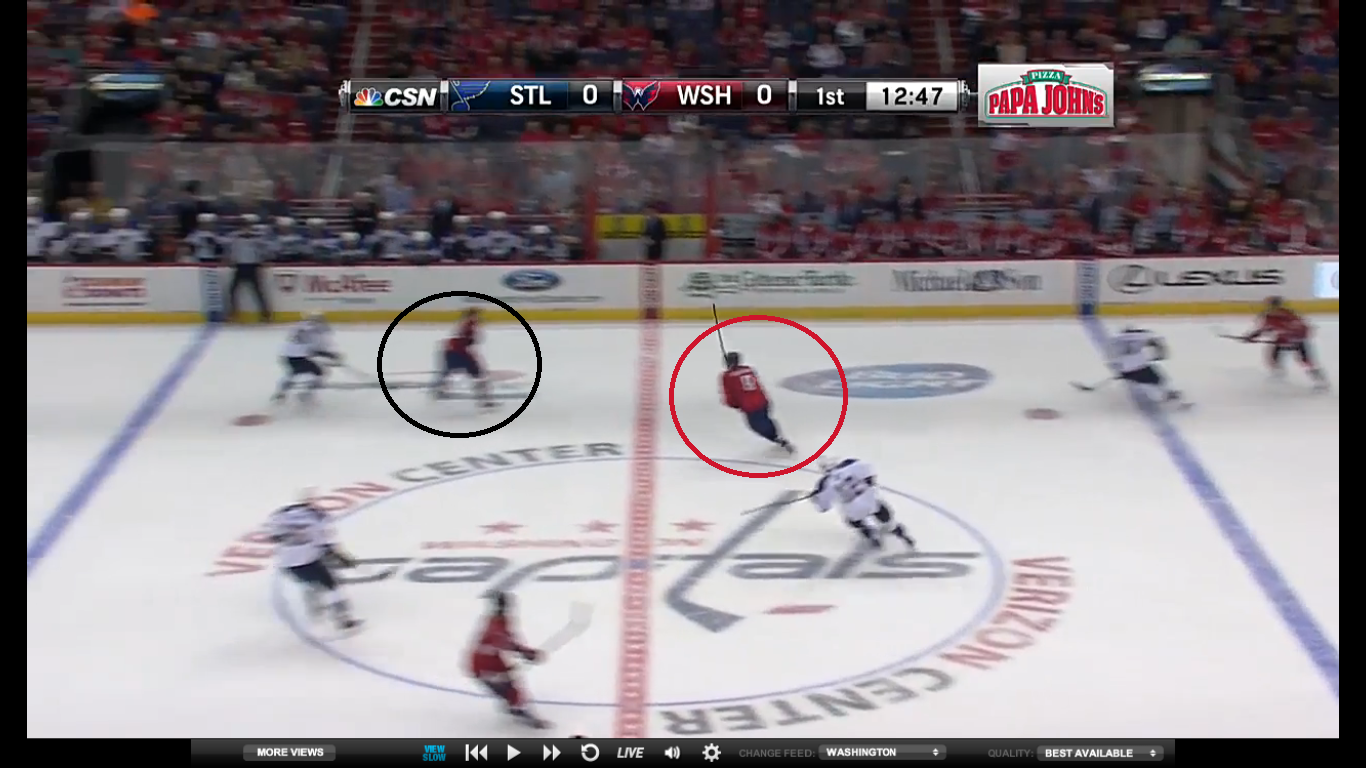 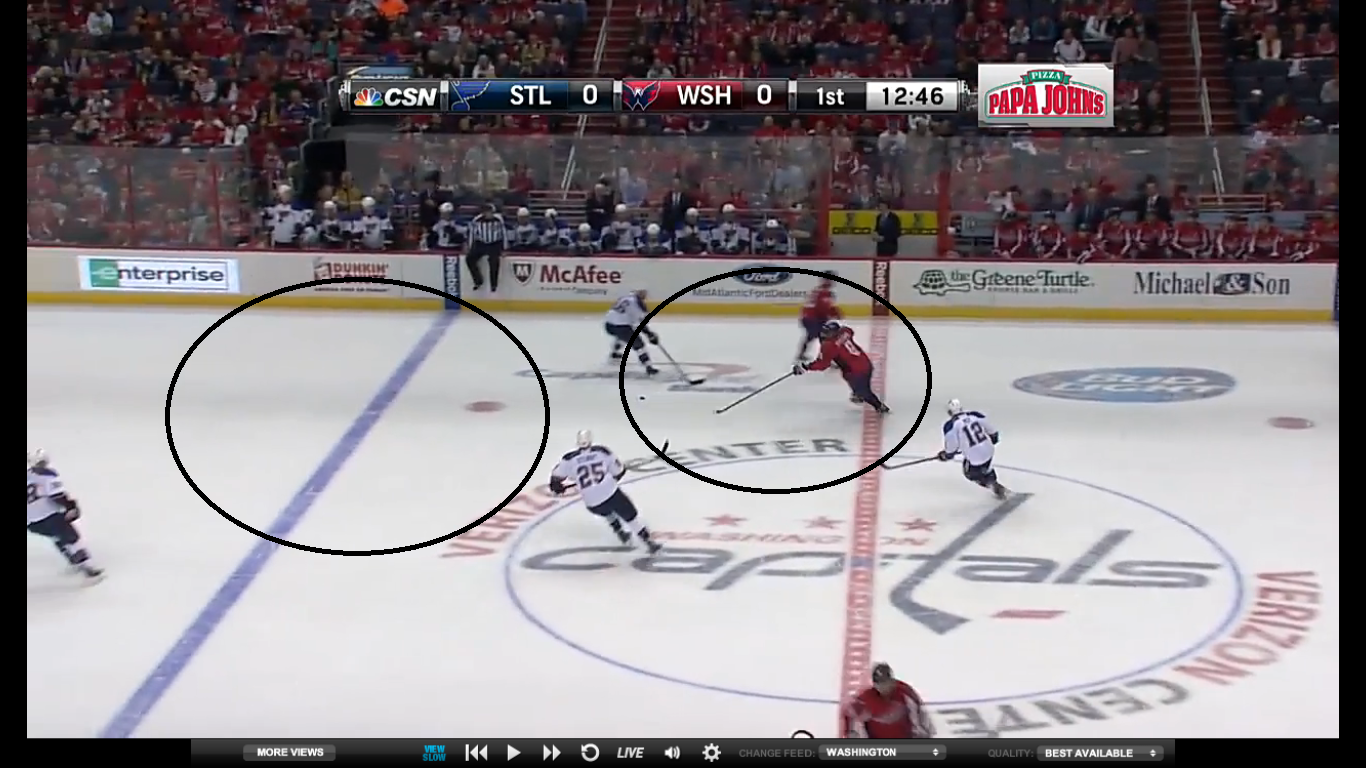 Ovechkin is at full speed when he retrieves the puck. The Blues' last defenseman back decides not to challenge Ovechkin, but rather to limit his ability to cut back to the inside (and presumably reduce the expected threat generated by a streaking Johansson): 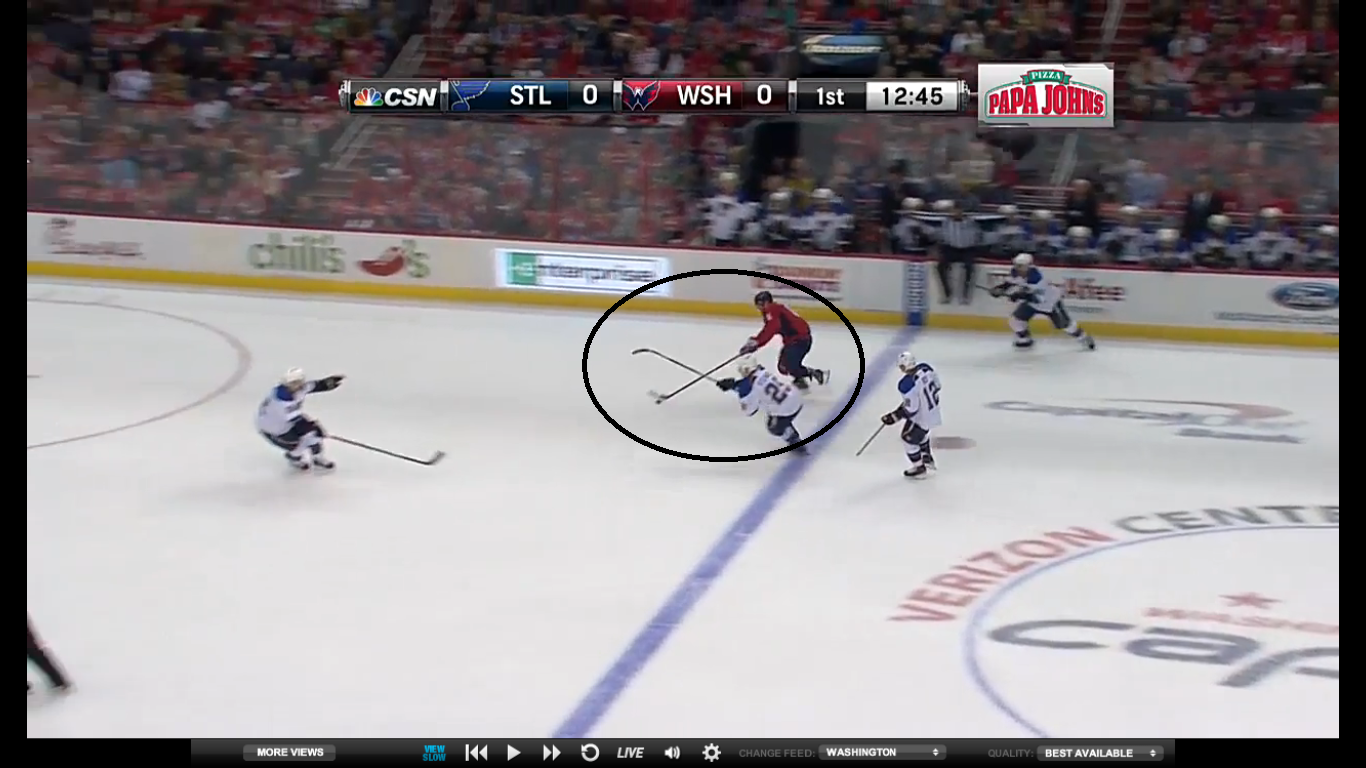 Johansson actually doesn't join in, but it doesn't matter - Ovechkin stays to the outside and hits his spot with his slapshot, beating nemesis and future teammate Jaroslav Halak for the Capitals' first goal of the night. 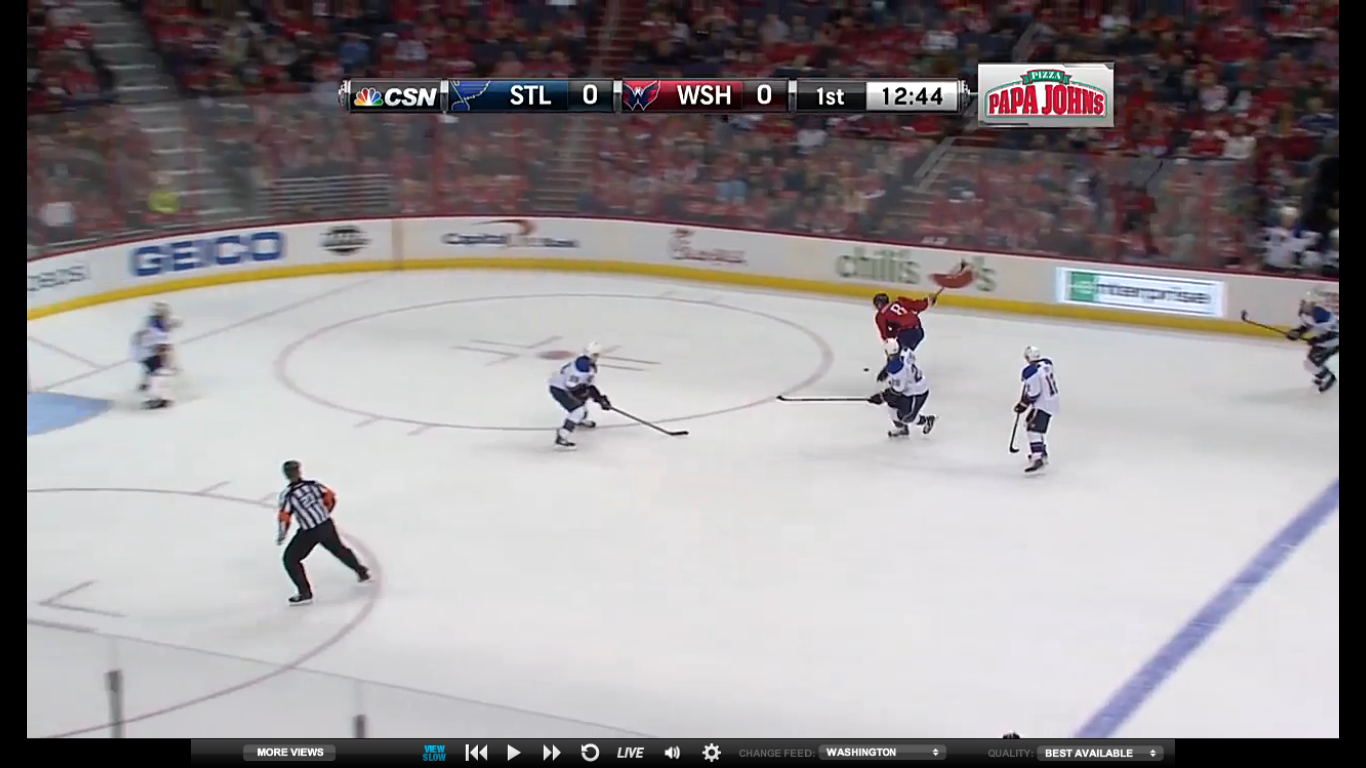 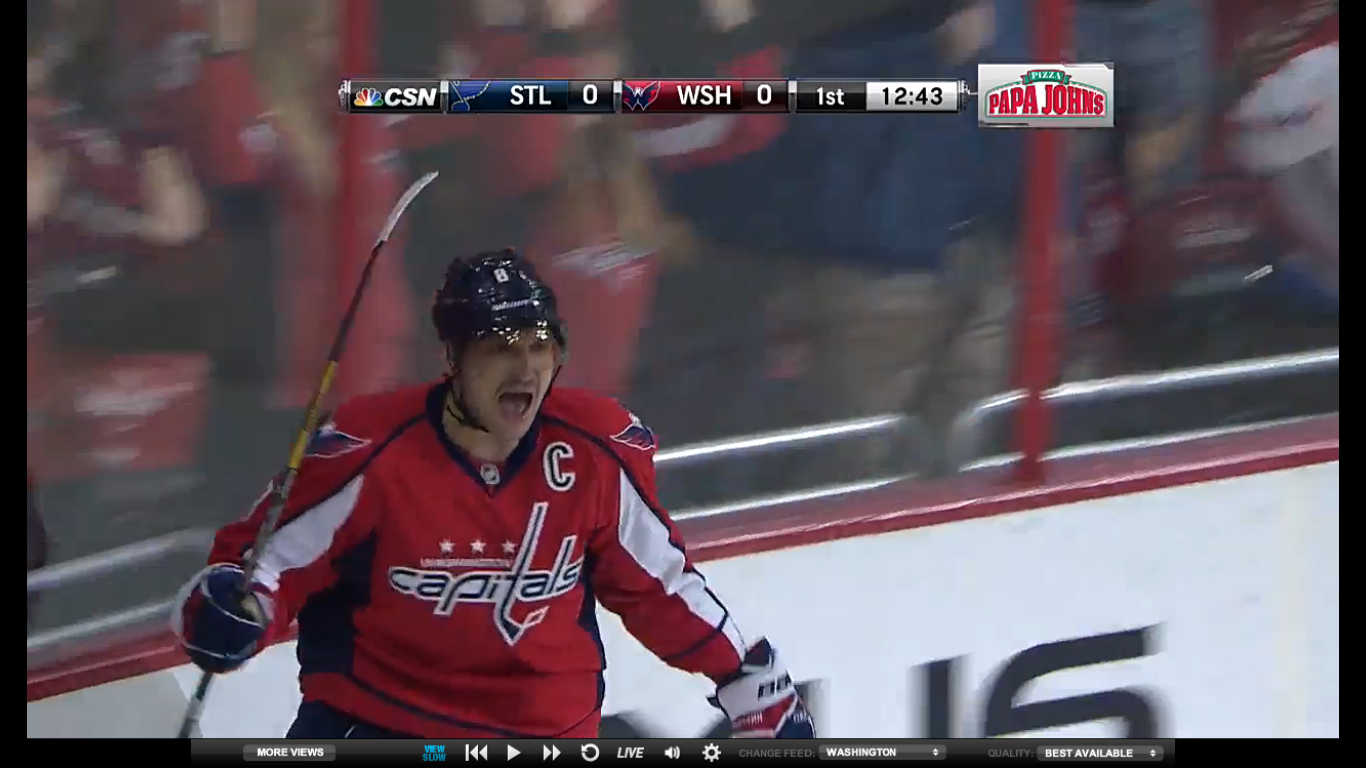 The key to this play (like so many others for the top line) was speed in transition. To get a better idea of the quickness of the play, here it is (start this video at about the 20 second mark):

Next up is a play Rob broke down in great detail back in October, but it's worth another look now. Ovechkin's carry resulted in a whopping four Fenwick attempts, the last one being a goal for Backstrom:

So those are two examples (obviously successful ones) of how the top line enters the zone with control. Controlled entries aren't always going to be so uncontested, but even when they aren't, the top line needs to make a concerted effort to find a way to enter the zone with both speed and the puck. As Eric Tulsky et. al. wrote:

Dumping the puck is often thought to be a safe, responsible play, as a turnover at the blue line might lead to a rapid chance against, whereas the worst cast on a dump-in is that the other team recovers the puck and has to advance the full length of the ice against an established forecheck. However, that traditional sports strategies are often too conservative as a result of misaligned incentives- an aggressive strategy might earn the team more wins in the long run, but the occasional spectacular failure of an aggressive scheme can cost a coach his job.  (Tulsky, Detweiler, Spencer, and Sznajder)

As we noted back in June, Barry Trotz seems to be a conservative coach, but he'd be wise to give his biggest guns a long leash when it comes to carrying the puck into the offensive zone.

Through the first 26 games tracked, only five Capitals' players had more than 100 zone entries and all of them were forwards. Here is how their zone entry numbers looked both after 26 and 45 games. 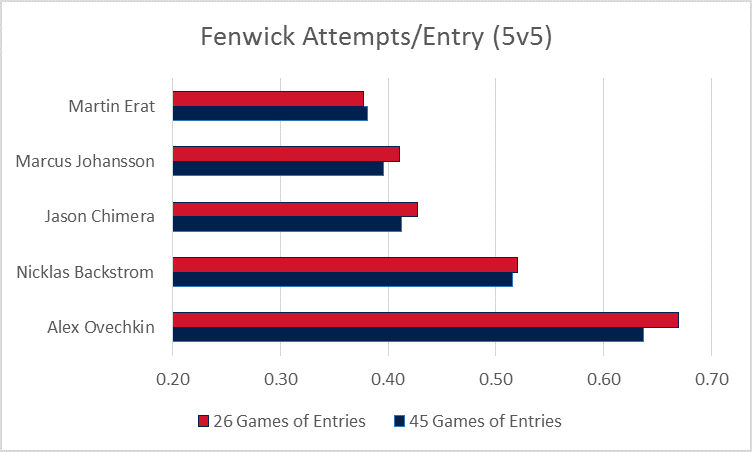 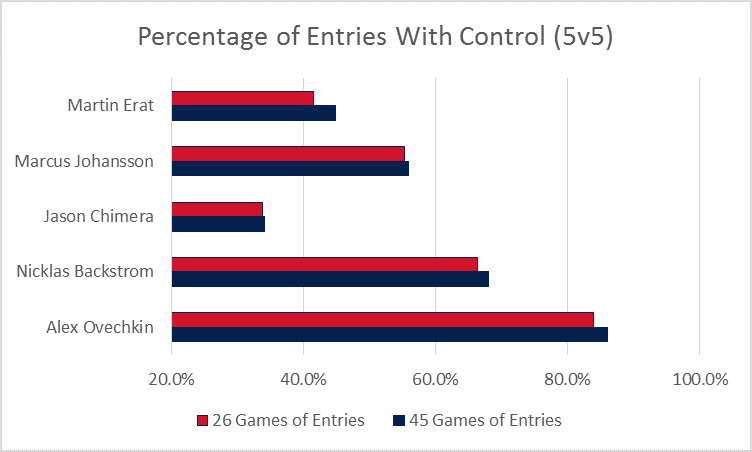 Based solely on visual examination of these graphs, it appears that 100 entries is a pretty decent benchmark for player assessment - no player saw his cumulative Fenwick-attempts-per-entry change by more than five percent, and only one player saw his control percentage shift more than three points.

It's interesting (but expected) that the player who could not find a stable role (i.e buried on the fourth line) saw the most variation in terms of percentage of entries with control. So although 100 entries appears to be a decent benchmark for zone entry stats, there is still the potential for some variation, of course.

Just for fun...here is a look at the Predators and how their zone entry numbers looked through 23 and 35 games.

As always if you have any comments or questions feel free to leave them below.