Japers' Rink Mailbag: The Ideal Wing and Much More

What do you give a top line that has two-thirds of everything? The ideal complement to Ovechkin and Backstrom wouldn't hurt. That in much more in this week's edition of "you ask, we answer."

Share All sharing options for: Japers' Rink Mailbag: The Ideal Wing and Much More

First up, let's dream a little dream, shall we?

The Peerless: OK, let's think first about what we might want in a winger to play with Alex Ovechkin and Nicklas Backstrom. Obviously, Ovechkin and Backstrom are very skilled forwards. They have enough talent to drive the scoring portion of their line's burden. You would not need a 30-goal scorer to occupy the other forward spot, but he would be a guy who could contribute.

What is it that Ovechkin and/or Backstrom lack or could use more of in a partner? While both can be a bit ornery at times, neither has a particular edginess to their game. Those two might benefit from a player who can get under the skin of opponents, if only by virtue of this relentlessness and be a bit of distraction when the three are on the ice. Backstrom is a possession sort of forward in that it is hard to dislodge him from the puck, but neither he nor Ovechkin are consistently the sort to go and get the puck. I'd like to see some of that in a complementary forward. And, I'd like to have a guy in there who is the "designated driver," the one who can play defense (and maybe have some rub off on his teammates). If there is one NHL'er that might fit that description, without regard to his current contract situation, it would be Los Angeles' Dustin Brown (who is also a 55-plus percent Corsi-for at 5-on-5 the last three seasons). If it was an impending free agent (again, without respect to contract) it might be a Ryan Callahan.

Should Read (But It's Your Call - I'm Not Your Supervisor)

How the Great Eight learned that to give is to receive

Should Read (But It's Your Call - I'm Not Your Supervisor)

J.P.: Is Ovechkin a right- or left-wing in this scenario? Regardless, you know I think he's at his most productive when he's letting others skate the puck into the zone and he's off finding space. So his opposite wing has to be someone who's got some speed and skill, but also someone who's not afraid to shoot (sorry, MoJo), and a defensive conscience would be nice.

When I think of great lines in recent memory that the Caps' top trio could be modeled after - pure goal scorer, skilled two-way play-making center, defensively-sound puck-carrying wing - I think of Dallas around the turn of the century and their line of Brett Hull, Mike Modano and Jere Lehtinen. So who's my Lehtinen (the last wing to win the Selke, by the way)? How about Marian Hossa? Sure, he's getting older, but he's still flat-out getting it done on a nightly basis, and would look pretty terrific opposite the Great Eight.

Muneeb: A big-bodied winger who can pass, shoot, and work the boards, preferably one who can also carry the puck through the neutral zone and won't break the bank... Jaromir Jagr.

Okay, I like Patrick Marleau's speed, two-way ability, and versatility, too. Plus, Jeremy Roenick already isn't a fan and he comes from another organization that hasn't made the Final in a looong time (ever, in fact), and I'd like to give the third spot on that top line to someone who needs redemption.

Rob: You can't go wrong with any of the players that have been mentioned, they're all great players that have shown the ability to be key contributors on successful teams (if not in the NHL, then in the Olympics). But if we are talking ideals, they all have flaws. The biggest flaw in all of these suggestions? Money. With Ovi and Nick already taking up so much cap space, it's crucial for the Caps to find cheap contributors. Hossa's deal makes him cheaper than he should be, but that doesn't make him cheap (just because it's on sale doesn't mean it's cheap, ladies). Marleau's cap hit is over $6 million. Brown's is just under $6M. Callahan's salary requests just got him shipped out of New York, a city where seemingly no contract is too rich. You could put any of these guys on the Caps' top line and basically guarantee that the team is going to have all their eggs in one basket.

When I look for an ideal wing to play with those guys, I want someone that is young, fast, and capable of doing the dirty work but skilled enough to finish opportunities but not a true shoot-first guy (because we know that Ovi is going to take the lion's share of the shots). This year's Stanley Cup playoffs have showcased a guy that fits that bill perfectly: Tyler Toffoli. He's been a crucial part of the King's secondary scoring, playing alongside Jeff Carter, another shoot-first, pure goal scorer. Toffoli's speed and tenacity have helped the Kings in all three zones, and all at a cost of under a million dollars against the salary cap. His entry-level deal expires next summer, at which point the Kings will still have RFA bargaining power. It will be 5 or 6 years before Toffoli makes anything close to his market value. Sure, someday he'll make too much money to play with Nick and Ovi, but by then the Caps had better have identified the next wave of ELC contributors to help out up front. That's the reality of building a team around Ovechkin, Backstrom, and their contracts.

Becca: I'm going Patrick Kane. A lethal goal-scorer like Ovi but with a totally different style, so it gives an elite playmaker like Backstrom a couple of different options. Plus the potential goal-celebration power of 8 and 88 together would be fun to watch.

D'ohboy: Here's the list of attributes that I'd want for the ideal winger to play alongside Nick and Ovi:

Based on these criteria, here's my initial list including their current cap hit:

Next up, some roster questions:

@JapersRink Does Grabo stay? And do the Capitals make a move for Niemi if cut?

@JapersRink Who do you see at 2C next season? Grabo, Stastny, Kuzey, Kessler?

As for Mikhail Grabovski, it's hard to know what he and his agent are thinking, but obviously the Caps have a better chance of re-signing him now than they did before they hired a coach and GM. And it's similarly hard to know what Brian MacLellan and Barry Trotz are thinking. We all like what we saw from Grabo last year, but at what price (dollars and term) are they willing to commit to it going forward? And how off is that from what Paul Stastny will cost? Because I'd happily pay a bit more and go a bit longer on Stastny, who is younger and a better two-way player.

Regarding Kuznetsov, I don't think he's ready to center a scoring line in the NHL yet (if he ever will be), and the Caps need a second-line center who can fill in as a first-line center in a pinch (doesn't everyone?), so they'll want someone who has shown he can handle those duties. Ryan Kesler could be a fit, but the Caps would have to give up assets to get him, and they're probably going to want to save those desirable piece to bolster the defense.

Finally, on Antti Niemi, I don't see it. Braden Holtby is cheaper and, frankly, better. Holtby actually had a better save percentage than Niemi last year (overall and five-on-five), but a goals against average of nearly a goal-per-game more. Why? Volume of shots faced. And that's not on the goalie.

Holtby could use a veteran back-up, but Niemi probably isn't the guy.

Here we go back to fantasy land:

@JapersRink pick any (still active) caps player that played for the team pre-lockout. Who do you bring back? Current playing condition etc

J.P.: If we're talking pre-2004-05-lockout, give me Boyd Gordon to center my fourth line. Though it's awfully tempting to go with Jagr or Alexander Semin just for fun, Gordon fills more of a need and comes at a more affordable price (and I've seen those other two movies and know how they end).

If we're talking pre-2012-13-lockout, other than Gordon, it'd be nice to have a mulligan on Mathieu Perreault and or maybe Cody Eakin.

@JapersRink will the new coach keep Ovi at RW or move him back to LW? #japersmailbag

J.P.: Definitely one of the more interesting questions facing Trotz. We know that he isn't as obsessed with handedness as his predecessor was, so it would seem both options are on the table. For what it's worth, here (via Sporting Charts) is a map of where Ovi the "right wing" scored his even-strength goals last year: 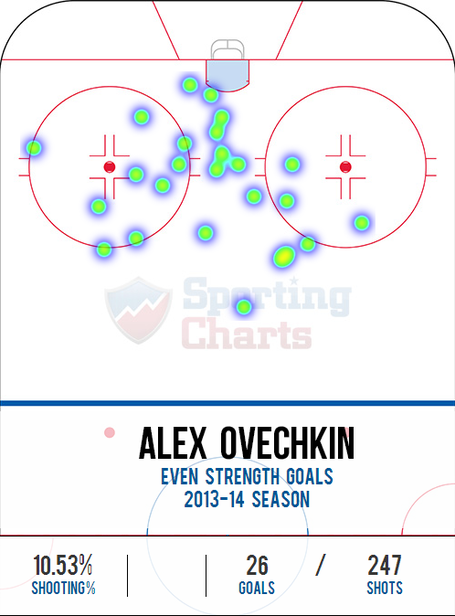 They might just need to come up with a new position for this guy - Ovi Wing. I'm sure the PHWA would be on top of how to handle that.

Hey, a question about the prospect involved in the Martin Erat trade. No, not that one. Or that one...

@JapersRink How does Chris Brown fit into the Caps' prospect pool? #JapersMailbag

J.P.: Brown looked alright in his half-dozen games in Washington, but doesn't have a lot of upside (despite a big AHL rookie season in 2012-13 and a decent follow-up campaign, when he wasn't busy packing and unpacking his bags). He can play center or on the wing, so that helps his cause, and he's not unwilling to drop the mittens when the situation calls for it, so he could conceivably land a fourth-line role at some point in the future, but more likely he'll be a contributor down in Hershey for most of the season. And he'll certainly make our Top-25 Under 25 list this summer.

Alright, last but not least:

@JapersRink how much of our defensive flaws are system related vs roster related, #japersmailbag

How about a little from column A and a little from column B? I think it's safe to say that Adam Oates's systems didn't maximize the skillsets of the defensemen he provided to coach, but that George McPhee didn't provide his coach with even an average NHL-calibre blueline. And both men were relieved of their duties as a result.