How the Great Eight learned that to give is to receive

Share All sharing options for: Alex Ovechkin: Even Stronger at Even Strength

"[Caps Head Coach Adam Oates] talk about how I have to stay more in the middle of the ice in the offensive zone because lots of pucks go there and I can find the rebound there. It’s working and those kind of goals we need." - Alex Ovechkin, 17 November 2013

With a pair of first-period strikes in Sunday night's 4-1 win over St. Louis, Alex Ovechkin tied the Blues' Alexander Steen atop the League's goal-scoring ledger with 17 tallies and reached double-digits in even-strength goals. And while Ovechkin's opening salvo was a magnificent juxtaposition of Nicklas Backstrom's delicate touch and his own raw power, it was also a notable for its rarity - a goal on which Ovechkin himself carried the puck into the offensive zone.

Eight months ago, we noted the following:

[W]hile there are some instances there where Ovechkin vs. The World worked (and no doubt more where it worked and resulted in an assist or just a high-quality chance), that's just not how he scores any more... if it ever really was. And yet, we've seen - literally for years - Ovechkin's over-reliance on carrying the puck himself rather than taking full advantage of his teammates (Internet hilarity aside). ...

Ovechkin needs to spend less time with the puck and more time doing things without it - moving to soft spots in zones, driving to the net for rebounds, and so on.

In the interim, Ovechkin has done exactly that and the goals have poured in - 40, all told, in his last 42 regular season games, with 23 of those coming at even-strength. This season, he has more goals (total and even-strength) through 21 games than he had in 2007-08, when he'd end up with 65 lamp-lighters, 43 of which came at evens.

So yeah, it's working. And having Backstrom and a breaking-out-before-our-eyes Marcus Johansson is helping to make it all possible - Johansson has the primary assist on seven of Ovechkin's even-strength goals, Backstrom has had a helper on seven as well. But what are they doing, or, more accurately, what is Ovechkin allowing them to do? Back in April, we took a look at how Ovechkin was scoring at even-strength, and concluded that "Ovechkin is having more success now that he's letting others lug the mail and he's going to dangerous spots that he couldn't get to with the puck." As true as it was then, it's even more so today.

Below is a map with each of Ovechkin's ten 2013-14 even-strength goals plotted numerically in chronological order, the encircled number representing the location at which the puck last touched Ovechkin's stick and the squares representing where Ovechkin gained control of the puck immediately prior, as applicable (which is the difference between the blue and the red - the latter involved some puck-carrying, the former were one-timers and redirects): 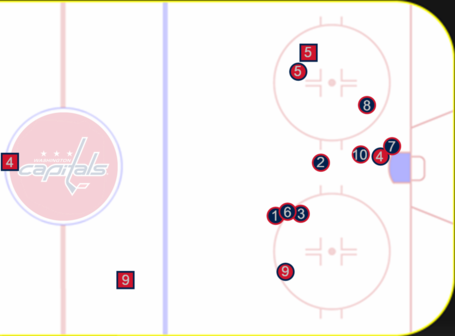 That first goal on Sunday night was only the second time all season that Ovechkin had carried the puck into the offensive zone on his own and scored... and the first was Goal #4, a clean breakaway from the Caps' side of center ice against Winnipeg. The other "red" goal? A faceoff win that Ovechkin corralled and took half a stride with before ripping the puck past Ondrej Pavelec in that same game against the Jets.

In other words, Sunday night's goal was really the first time all season Ovechkin skated with the puck and a defender between himself and the goal and scored at even strength. It was also pretty much the first goal he's scored from outside the faceoff dots. "I have to stay more in the middle of the ice in the offensive zone because lots of pucks go there and I can find the rebound there." Indeed. [For quick reference, here are links to goals 1, 2, 3, 4, 5, 6, 7, 8, 9 and 10.]

Alex Ovechkin is still shooting from everywhere, and the sample size is far too small to say definitively that this is the only way he can score any more. And, of course, there's more to hockey than scoring goals (although score enough of them and the rest of it tends to disappear). But if you were waiting for Ovechkin to take direction, change his game, get less predictible, and, ultimately, less stoppable, you've gotten your wish. This is the maturation of Alex Ovechkin as a goal-scorer.