From Alzner to Wilson, we're taking a look at and grading the 2013-14 season for every player who laced 'em up for the Caps for a significant number of games during the campaign, with an eye towards 2014-15. Next up, Dustin Penner.

Japers' Rink Player Card (click for a hi-res version, and a glossary of terms used in this post can be found here; data via NHL.com, CapGeek, Extra Skater, Behind the Net and Stats.HockeyAnalysis.com; note: some of these stats include Penner's time in Anaheim): 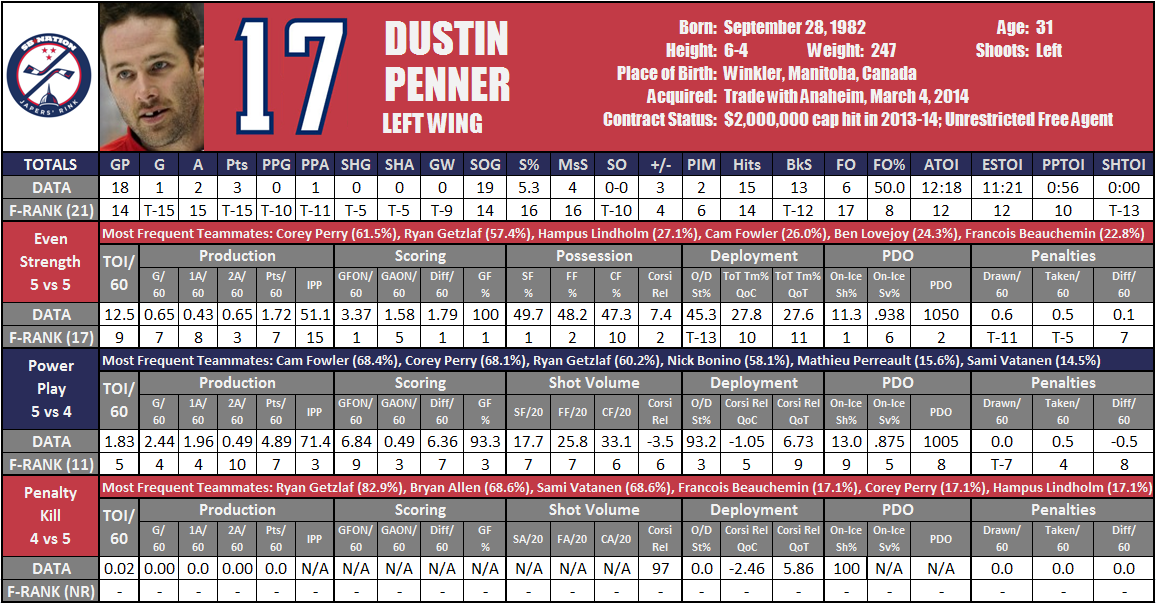 Penner and his most frequent Caps linemates (via Stats.HockeyAnalysis.com) and lines (via our own Muneeb): 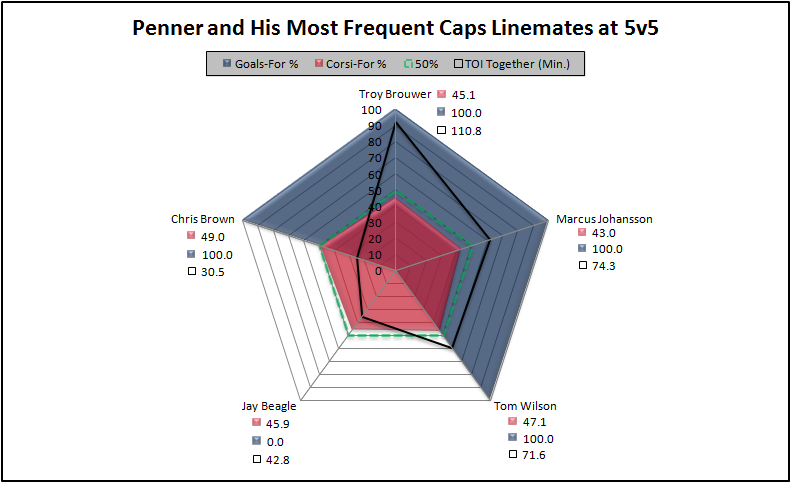 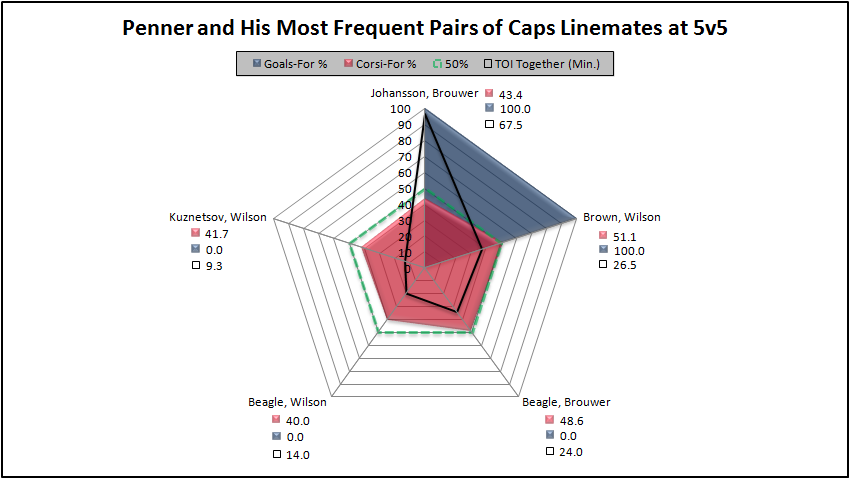 Penner's Past Seven Seasons (via Stats.HockeyAnalysis.com): 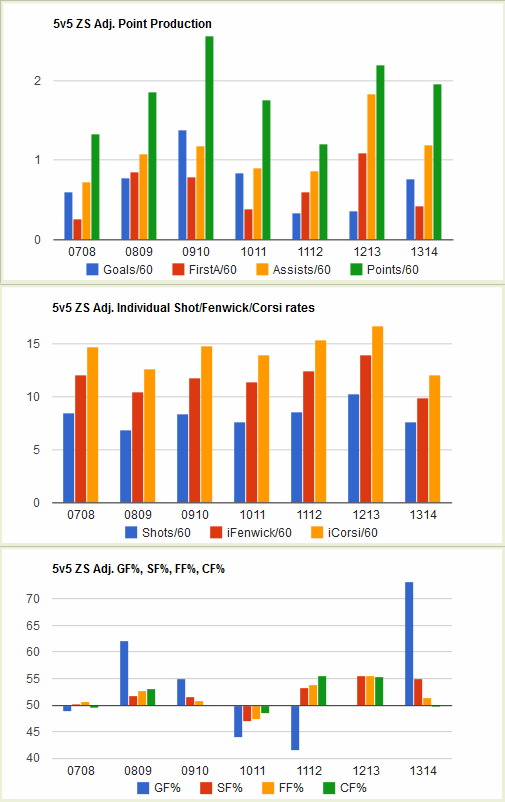 Key Stat: Penner's point-per-game average dropped from 0.65 in his first 49 games with Anaheim to a paltry 0.17 in his final 18 games with the Capitals.

Interesting Stat: Penner finished plus-3 for the Caps on the season, and only had one game where he finished with a minus rating, a 3-0 loss to Boston on March 6.

The Good: It's hard to blame Dustin Penner for being unhappy about his deadline-day trade from Anaheim to Washington. After all, he was moved from the top team in the Western Conference - one with Stanley Cup ambitions - to a middling team in the Eastern Conference that harbored no championship ambitions and was fighting for its playoff life. But there was a silver lining, at least in theory: he would still be playing left wing on a star-studded top line that included Alex Ovechkin and Nicklas Backstrom, not much of a drop-off (if any) from playing with Ryan Getzlaf and Corey Perry in Anaheim. And in a contract year, it can't be the worst thing to show that you can be productive with multiple sets of high-end linemates. Show 'em what you got and get paid, right?

It didn't quite happen like that. Without even auditioning for a minute on the top line, Adam Oates determined that Penner wasn't fast enough to play with Ovechkin/Backstrom and relegated him, eventually, to fourth line duty. (Thankfully, Mike Knuble never played under Adam Oates!) And that was, symbolically at least, the end of his stint in Washington.

Penner didn't have a bad season though. He put up 13 goals and 19 assists for 32 points in 49 games. The problem was that he did all of that in Anaheim, not D.C. His claim to fame in the Nation's Capital was that he quietly led all Caps forwards in SF% (49.7%) and  was second (among the guys who finished the season in the organization) in FF% (48.2%). Not bad, considering the unfavorable deployments he got, and one can only wonder (how many times have we typed that with regards to an aspect of Oates's tenure?) how he might have looked riding shotgun on that top line.

Other than that, there wasn't much else. But at least he gave us some entertaining tweets!

The Bad: His fault or not, Penner did not have the impact anyone envisioned when the Caps acquired him for a relatively cheap fourth round draft pick. He was seemingly penciled in to first-line left wing and, before setting a skate on the ice, lost that role. Consequently, his numbers in D.C.  suffered. His ice time declined from 15.2 in Anaheim to 12.3 in D.C. (and his power-play time cut in half); even more concerning, his 0.65 ppg dipped to 0.17 post-trade. Of course, it's hard when you go from playing with Getzlaf-Perry to Troy Brouwer-Marcus Johansson, and the result was an ineffective Dustin Penner (granted, Penner benefited from a monster 12.3 on-ice shooting percentage as a Duck, which dropped to 4.9 percent in Washington).

If you were to heap a lot of the blame for Penner's under-achievement at the feet of Adam Oates, you may not get much pushback from a majority of Caps Nation. But the perception to many fans was that Penner didn't really want to be in D.C. anyway, and he quietly bided his time until the season was over, simply going through the motions. Penner's trade situation definitely deserves some sympathy; Penner's performance with the Caps did not. Fourth line or not, the two-time Stanley Cup winner could have showed more.

The Discussion: Would Penner fit in with the Barry Trotz-led Capitals? Should new GM Brian MacLellan consider re-signing him? What would it take for him to earn a 10 next year?