From Alzner to Wilson, we're taking a look at and grading the 2013-14 season for every player who laced 'em up for the Caps for a significant number of games during the campaign, with an eye towards 2014-15. Next up, Steve Oleksy. 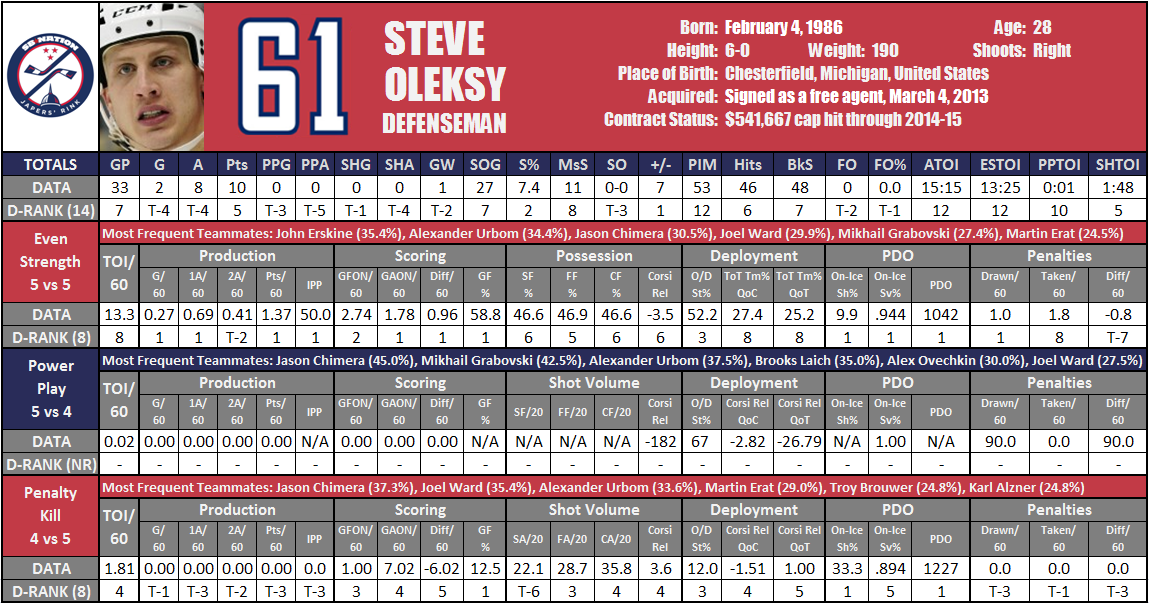 Oleksy and his most frequent defensive partners, via Stats.HockeyAnalysis.com: 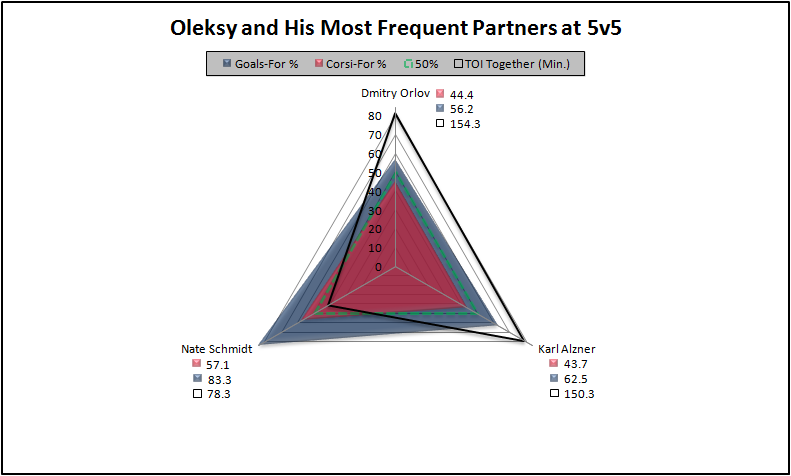 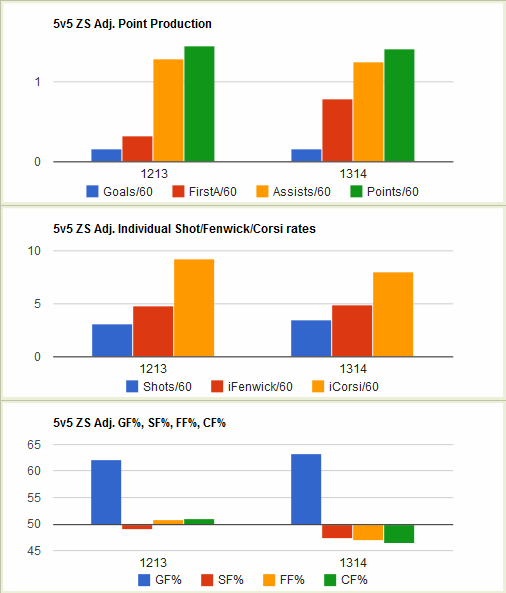 Key Stat: Oleksy was on the ice for a stingy 1.78 goals-against per 60 minutes, the best among all Caps' defensemen logging at least 20 games this season.

Interesting Stat: While often serving time in the penalty box himself, Oleksy actually led the blue line in penalties-drawn per 60, as well.

The Good: The dependable Oleksy was a nice player to have float between Hershey and Washington, at times serving as a third-pairing defenseman for the big club while at others being relegated to seventh or eighth on the team's depth chart. When Oleksy had a sweater, however, he was the rugged defenseman Capitals fans have grown to love, eating up 15:15 in TOI each night. In those roughly fifteen minutes, Oleksy was usually dispatched to high-risk areas of the ice in Washington's defensive zone, performing at his defensive best when clearing opposing bodies from the front of his goaltender's net.

Aside from the occasional fancy moves (more on that in a minute), Oleksy is at his offensive peak when he keeps play with the puck simple and funnels perimeter shots through traffic and on net, and this season was no different. In fact, he used that technique to rack up ten points in 33 games, setting career highs in goals and points (albeit with just one prior "season" on his resume). He also had the second-highest shooting percentage at five-a-side among all 14 blueliners.

Granted, Oleksy may never hit the offensive totals for which he was on pace before falling out of the lineup - a five-goal, 20-assist run if stretched out over a full season - but he chips in enough on offense to be serviceable, while adding a bit of nastiness around the Caps' net that can make opponents think twice about running Braden Holtby, Philipp Grubauer or whoever may be patrolling the crease for the Caps.

The Bad: Oleksy got a bit more time in the NHL this season than he did in the lockout-shortened 2012-13 campaign, appearing in five more games, but after 33 appearances he began appearing as a frequent healthy scratch for Adam Oates. He was then placed on waivers in early January, replaced by right-handed shooting rookie defenseman Connor Carrick. How much of that had to do with his actual performance for the Caps and how much went back to Oates's preference for proper handedness among players is up for debate... but the end result was a return trip to Hershey for thirty games with the Bears to finish out his season.

Did you know Oleksy had this move in his bag of tricks? Neither did Cam Atkinson, apparently, as Oleksy was able to toe-drag around him and get a shot on net that Brooks Laich deposited for the eventual game-winner in a mid-October tilt against Columbus. (And yes, that move's worthy of a three-GIF salute.)

The Discussion: Given his frequent appearance in the press box followed by a demotion to Hershey, do you believe Oleksy is more suited to an AHL role or should he get another shot at regular NHL minutes in 2014-15? If it's the latter, where do you slot him in on the Caps' current defensive depth chart? What would it take for Oleksy to earn a "10" next year?