From Alzner to Ward, we're taking a look at and grading the 2013 season for every player who laced 'em up for the Caps for a significant number of games during the campaign, with an eye towards 2013-14. Next up, Steve Oleksy. 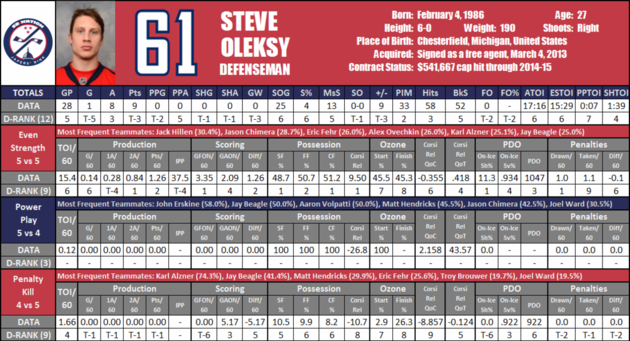 Oleksy and his most frequent partners: 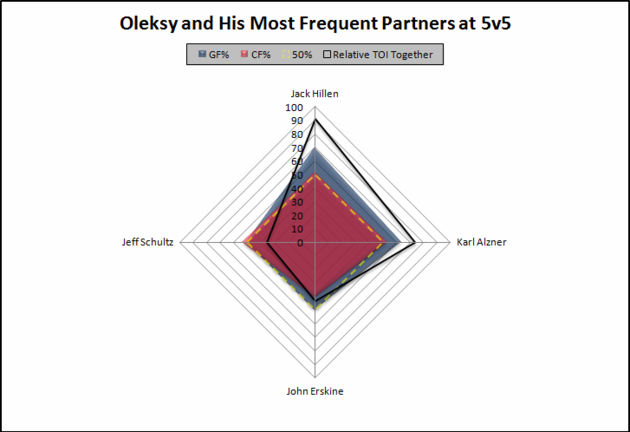 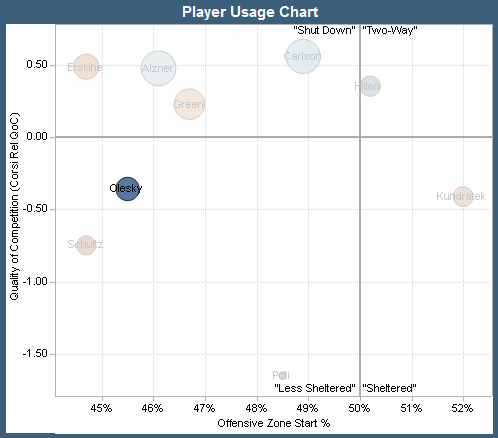 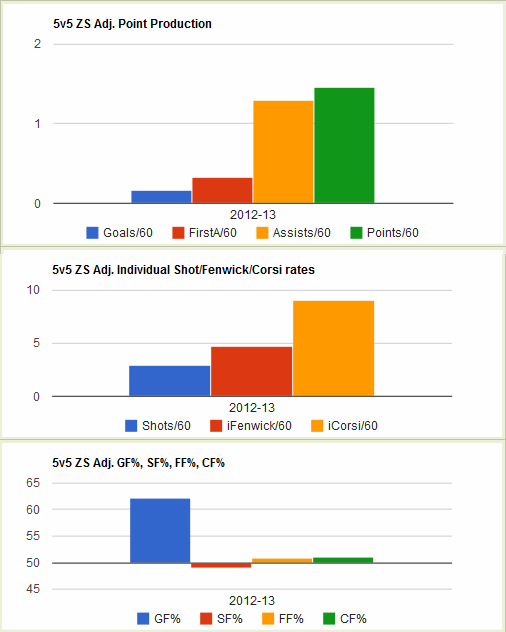 Interesting Stat: Oleksy's three fighting majors marked the first time someone other than Erskine topped the D-corps in that area since Nolan Yonkman paced the group with four in 2005-06.

It would be hard to blame Caps fans if that was their initial reaction at the early-March announcement that the team had signed (to a three-year deal, no less) and recalled a 27-year-old defenseman whose professional hockey resume was limited to stops in Las Vegas, Toledo, Port Huron, Idaho, Lake Erie, Bridgeport and Hershey after playing three years at Lake Superior State.

"Oh, he's a fighter, and the Bruins are up next. Makes sense."

A not unreasonable assumption after digesting the news a bit. Indeed Oleksy had already dropped the mittens 11 times in the AHL in 2012-13 (strike a pose!) and a quick glance at his fight card reveals he's certainly no shrinking violet. But with a goal and three assists (not to mention a dozen blocked shots, 11 credited hits... and no pugilism) in his first four games, the notion that Steve Oleksy was "just a fighter" was quickly disabused - fighting may have helped get Oleksy to Washington, but it wasn't going to be enough to ensure a lengthy stay in the NHL.

And stay Oleksy did, thanks to good play and good fortune. Back in our Erskine Rink Wrap, we wrote the following:

And perhaps we should add a "The Lucky" section to Erskine's Rink Wrap, because he was certainly that (though he was far from the only Cap to be similarly smiled upon by the fates). Erskine had a 5-on-5 on-ice shooting percentage of 10.6% and an on-ice save percentage of .945, both of which are high and add up to a PDO of 1051, which was fourth-highest in the NHL among blueliners with at least 30 games played.

Well, Oleksy's five-on-five on-ice shooting percentage was 11.3% and his on-ice save percentage .934 for a PDO of 1047, which was eighth-highest among defensemen who played as many games as he did. Oleksy was both good and lucky... a pretty nice combination for an undrafted 27-year-old who had started three of the last four seasons in the ECHL.

Over two-plus months, "Binky" provided the Caps with generally solid-if-unspectacular defense, occasional flashes of offense (his outlet pass to Marcus Johansson in Game 1 of the playoffs comes to mind) and some much-needed physicality and sandpaper, while gaining a bit of a cult following in D.C. Most importantly, Hershey's Defenseman of the Year never looked out of place in the NHL, and it appears as if the Caps have picked themselves a keeper in #61.

The Bad: Oleksy had bumps in the road that would be expected of a first-year NHLer of any age, and probably fewer of them, in fact. But the most notable of these was a doozy - Oleksy's curious decision to punch at a Derick Brassard slap shot in Game 6 of the Rangers series, deflecting it past Braden Holtby for the game's only goal. (Perhaps the American boy instinctively reverted to his baseball roots for one incredibly costly moment.) Whatever the reason and despite the impact, Caps fans waiting for the Oleksy bubble to burst never really saw it happen. Sure, he's due a regression in some of his output-related metrics, but his underlying numbers are good (when paired with a decent puck-handler) and there's no reason to think they won't continue to be... other than the fact that full-time NHLers rarely emerge at his age. That's a perception that Oleksy will be fighting for a while yet, but one he seems equipped to handle - after all, fighting's what got him to the NHL.

The Discussion: What are realistic expectations for Oleksy going forward, both in terms of role and production? Was his solid 2013 a fluke, or have the Caps found a diamond in the rough? What will it take for him to earn a "10" next year?