From Alzner to Wilson, we're taking a look at and grading the 2013-14 season for every player who laced 'em up for the Caps for a significant number of games during the campaign, with an eye towards 2014-15. Next up, Evgeny Kuznetsov. 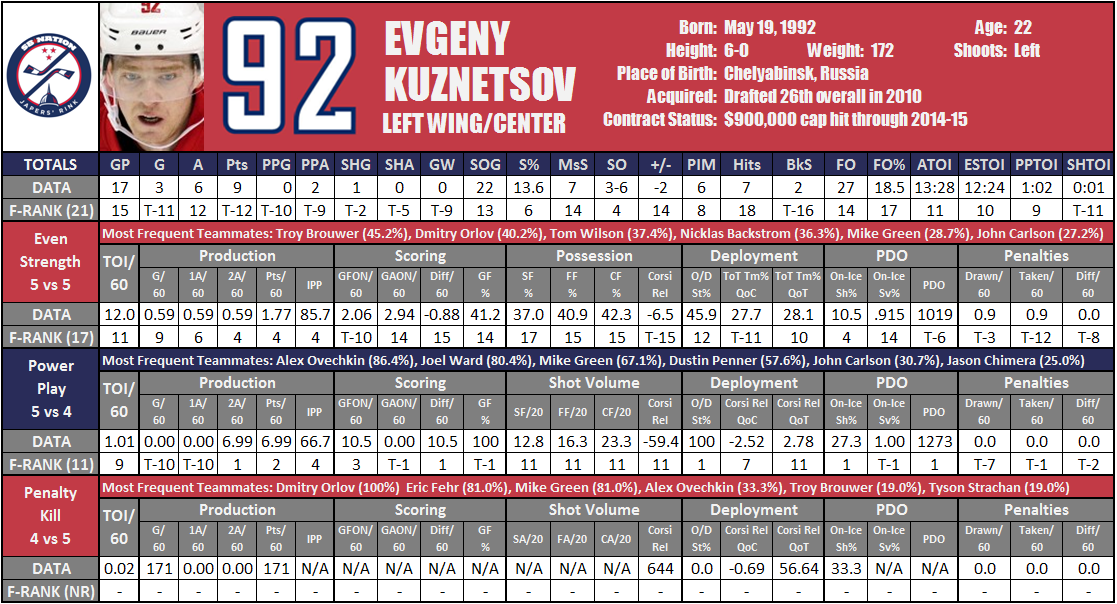 Kuznetsov and his most frequent linemates (via Stats.HockeyAnalysis.com) and lines (via our own Muneeb): 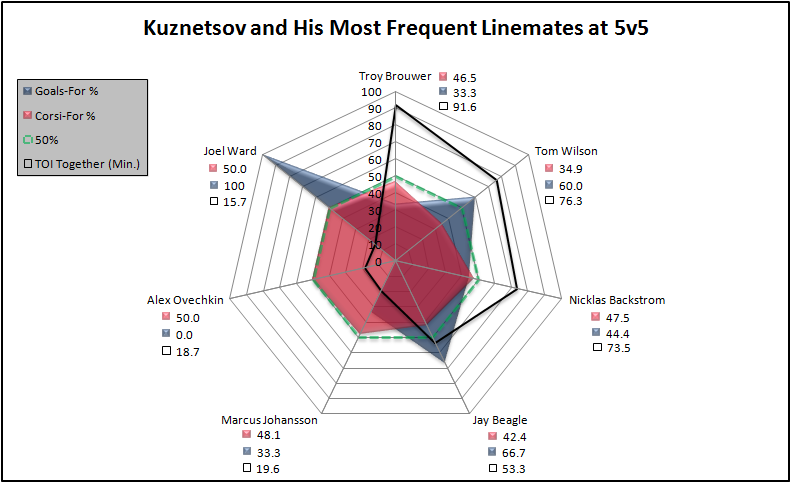 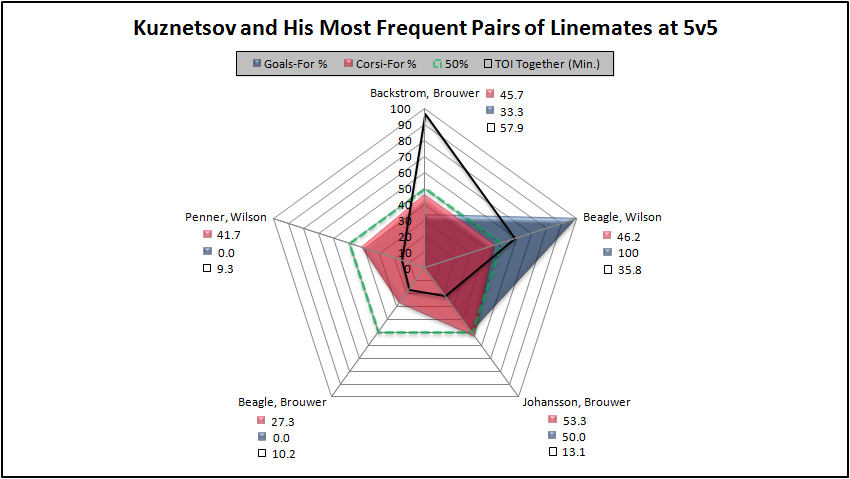 Key Stats: Evgeny Kuznetsov actually played in 17 NHL games this season. It wasn't enough to make up the small handful of points the Caps needed to make the playoffs, but he's here and that debate/mystery/wait is finally over.

Interesting Stat: Among Caps, only Alex Ovechkin (87.9%) had a higher individual point percentage than Kuznetsov's 85.7% at five-on-five.

The Good: The best part of Kuznetsov's season was simply that he finally signed an NHL contract and came to North America. Caps fans have been tantalized with the promise of Kuznetsov joining the team, bringing his potentially game-breaking talent with him. We've been reading headlines made by Kuznetsov wearing another team's red jerseys (usually positive, sometimes... not). The talent has been there, but so has the drama. Would he come, wouldn't he come. Is he even healthy? Well, he finally came, and that alone was great.

Adam Oates worked him into the lineup slowly, letting Kuznetsov get used to the NHL game, his new teammates, and the laughable semblance of a system that Kuznetsov was to learn. Kuznetsov started off spending most of his time on the fourth line, not exactly the place you envision a guy with such talent, but it made some sense. Kuznetsov quickly showed that he had too much talent to sit on a fourth line, even for Oates, and he began playing near the top of the lineup, finally scoring his first (game tying) NHL goal in a last-minute, shorthanded situation against the Kings. That goal put an exclamation mark on the Capitals' Season of the Rookie but somehow feels more important than the six rookie goals that came before it.

Ultimately, it's tough to give a full evaluation of Kuznetsov because he only played 17 games, but he did show a skill level that can be a difference-maker in the NHL and did not look out of place when he got opportunities with the Caps' best forwards. As noted above, when good things happened with Kuznetsov on the ice, he was usually a part of it; he didn't look like he was being carried by his teammates on any line. We assume that having been exposed to KHL coaching made Kuznetsov better prepared for what Adam Oates was preaching than the rest of his teammates, and now we're excited to see what he can do with NHL coaching.

The Bad: Yes, it's a small sample and he was new to NHL hockey, but Kuznetsov's possession numbers were horrible. Only Tyson Strachan, Julien Brouillette, and Aaron Volpatti had worse Corsi percentages (add Patrick Wey to the Fenwick list). Even acknowledging that the season in which he joined the Caps was a complete cluster, and that he played with grinders as much as he played with skill guys, every player that skated 32 minutes or more with Kuznetsov had better numbers without Kuznetsov, usually by a lot (and it's not because skating with Kuznetsov meant taking tougher defensive assignments).

There are certainly mitigating factors, but given his skill, and the players he's likely to be skating with going forward, he'll need to improve his defensive play to help allow the Caps to use his offensive skill at the other end of the ice. He'll have a whole summer to think about how he can succeed in the NHL, and to reflect on the taste he got this spring. Hopefully with a full training camp and a competent coaching staff Kuznetsov can improve his possession numbers, making him and his linemates more dangerous.

In the middle of March, the Caps were locked in a battle with the Vancouver Canucks to determine which team had the more disappointing collapse could win two points and maybe salvage their season and make the playoffs. Midway through the second period, Kuznetsov and Tom Wilson combined to do this, showing that in the midst of a painful season, there might be some bright future to look forward to.

The Discussion: Where does Kuznetsov fit in to the Capitals' roster? Is he a player that is capable of anchoring (in the positive sense...) a scoring line in the NHL? Can he return the prolific scoring to the Caps' second line (scoring that hasn't been seen since Alex Semin left for Carolina)? If not, what kind of help does he need? How does the full-year inclusion of Kuznetsov on the team impact what steps the new GM needs to take to make the team competitive again? What would it take for Kuznetsov to earn a 10 next year?