It's hard to believe that a $3 million free agent signing in August could completely recast assumptions and expectations about a team's forward corps, but that's precisely what happened when the Caps inked Mikhail Grabovski last month. With the stroke of a pen, the Caps went from Brooks Laich and Mathieu Perreault as second- and third-line center options to a team with, well, more options (and pretty decent ones ones at that).

As Adam Oates and his staff work out those "good problems to have," it can be difficult for the rest of us to get a good read on the team's depth chart, which in turn gets at one of the problems with traditional depth charts - should players be organized by likely line/role, talent or projected games? Is Laich a checking-line center or a scoring-line wing? What about Martin Erat? Is Marcus Johansson the team's top left wing? What about the much ballyhooed fourth defenseman? Where does Tom Wilson fit in? And so on.

And that's part of the reason we've been approaching the team's depth chart in a non-traditional way. As we noted prior to the start of last season, we've essentially listed the players we think have a decent chance of seeing some time in Washington this year and ranked 'em by position, allowing for overlap, which makes for a nice visualization.

It can't be stressed enough that these are not intended to be read as a prediction of line combinations or roles (i.e. scorers versus checkers), or even to predict who would be recalled in the event of an injury (if a scoring line wing gets hurt medium-to-long-term, for example, he's likely to be replaced by someone with a similar skillset, whereas a more defensive-minded grinder will likely be spelled by someone in more of a checking-line mold). 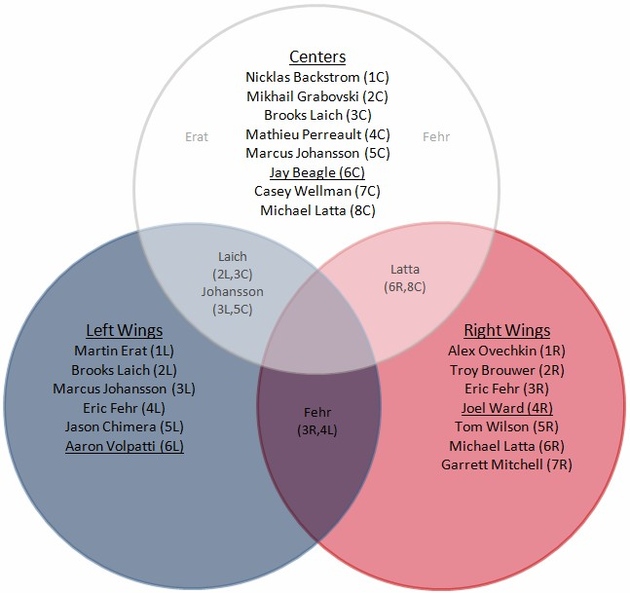 Note that there's a line drawn at each position to mark the likely cutoff of the NHL roster - if everyone's healthy and the team doesn't make any significant moves between now and opening night, the guys above the line will likely be in D.C., the guys below it elsewhere... we think. Remember that these aren't line combos but rankings by position, with players on the lists of the positions at which they're likely to play a reasonable amount of their even strength time. These are also merely our best guesses - it's certainly possible, for example, that Oates converts Eric Fehr into a full-time center, but until it happens, this is what we're going with, and he and Erat can sorta float around in the center circle without being placed on the depth chart.

Unlike in previous years, there doesn't seem to be much room for anyone to break into the top 12 forwards we listed here (again, if everyone's healthy), but Tom Wilson certainly is knocking on the door. Is he one of the top-four NHL right wings in the organization right now? We don't think so, and that's reflected on the chart.

On to the defense and goalies: 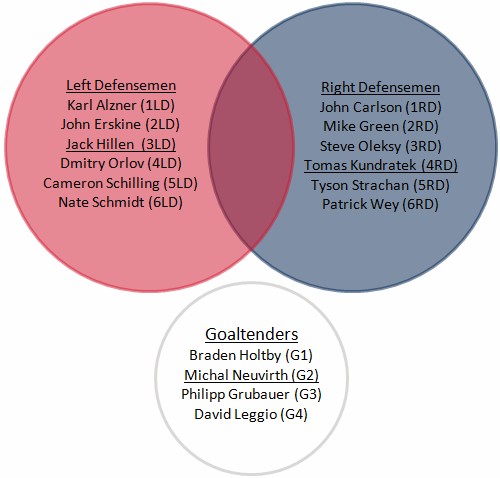 Stop us if you've heard this one: the Caps have a solid top-three defensemen and decent depth for third pairing slots, but that fourth defenseman - the second left-handed defenseman - is going to be a trouble spot. Oates insists the job is John Erskine's and that he's in no danger of losing it, but we'll see how long that lasts (Oates wasn't nearly as adamant over the summer). Dmitry Orlov is likely Hershey-bound for the reasons we detailed here, though he could certainly be on the old Karl Alzner Memorial Hershey-to-D.C.-to-Hershey Yo-Yo this winter. Among possible call-ups, if the team is looking for grit, think Tyson Strachan, if they're looking for a puck-mover, think Nate Schmidt, and if they're looking for a stay-at-home defender, think Cameron Schilling. And always - always - be thinking about what hand the guy shoots with and whose spot he's taking, because you know Oates does.

Finally, there's not much question that Braden Holtby is the team's number one netminder right now and Michal Neuvirth solidly his back-up, but no one would be surprised if that flips at times - Neuvirth has it in him to be a good starter for stretches, and Holtby has it in him to hit some bumps in the road. Philipp Grubauer could also get a handful of starts, and David Leggio would most likely be the back-up if either of the top two goalies were to be out for an extended period of time.

So that's our take on the roster and organizational depth chart at this point. Given the above, if you're Adam Oates, what do your opening night lines, pairings and goaltender look like?