Ed. Note: An earlier version of this post ran back in October, but with the lockout now over, we figured it'd serve as a good refresher as we all cram for the rapidly approaching season.

With NHL teams about to start loosening up before taking their positions in the starting blocks for a sprint of a season, and fans (those who remain) trying to remember just who ended up where before the League closed shop for three-plus months, the Washington Capitals find themselves stronger down the middle (and perhaps weaker on the wings) than they've been in some time. The one-two punch of Nicklas Backstrom and Ribeiro gives the team the most formidable pair of pivots they've had in quite some time (assuming Backstrom is healthy), but it's also one of the only places that the team's depth chart appears to be settled (okay, maybe the top left wing is also fairly clearly established). A new head coach, a few departing mainstays and some new names in the mix leave positions and roles very much in question up and down the lineup; so many questions, the answers to which the Caps had best find quickly, as even the slightest stumble in this shortened season could cost a team a playoff spot.

These "depth chart" questions get at one of the problems with traditional depth charts in that it's often difficult to slot players - should they be organized by likely line/role, talent or projected games? Is Brooks Laich a checking-line center or a scoring-line wing? How about Marcus Johansson? Who's the sixth defenseman? Is Joel Ward going to get a chance to earn his paycheck on the third line or be relegated to the fourth? And so on.

And that's part of the reason we've been approaching the team's depth chart in a non-traditional way. As we noted last year, essentially, we've listed the players we think have a decent chance of seeing some time in Washington this year and ranked 'em by position, allowing for overlap, which makes for a nice visualization.

It can't be stressed enough that these are not intended to be read as predicting line combinations or roles (i.e. scorers versus checkers), or even to predict who would be recalled in the event of an injury (if a scoring-line wing gets hurt medium-to-long-term, for example, he's likely to be replaced by someone with a similar skillset, whereas a more defensive-minded grinder will likely be spelled by someone in more of a checking-line mold). 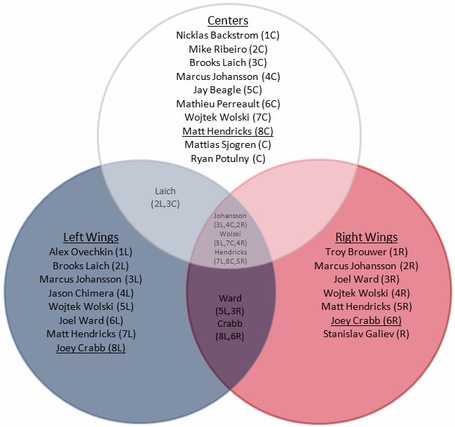 Note that there's a line drawn at each position to mark the likely cutoff of the NHL roster - if everyone's healthy, the guys above the line will likely be in D.C., the guys below it in Hershey. Also, remember that these aren't line combos - they're rankings by position, with players on the lists of the positions at which they're likely to play a reasonable amount of their even strength time (and these are our best guesses, but it's certainly possible, for example, that Adam Oates converts Alex Ovechkin to his off-wing and plays him on the right side, but until it happens, this is what we're going with).

Lastly, there would seem to be plenty of opportunity for Wojtek Wolski (and, perhaps to a lesser extent, Mathieu Perreault) to rocket up the depth chart on one wing or the other due to the glaring lack of skilled forwards on the roster - there are plenty of 12-to-20 goal-scorers on those lists, but how many are good for 20-plus? Joey Crabb could surprise as well. Opportunities abound.

On to the defense: 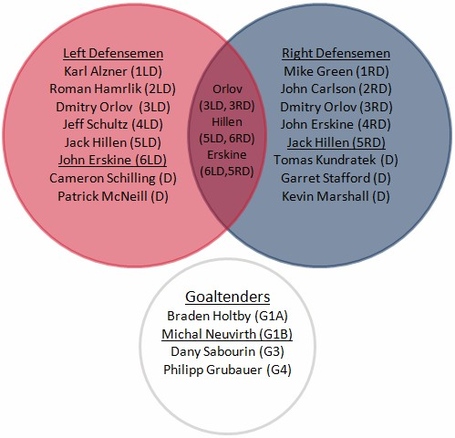 The top-four would seem to be set (though likely paired Karl Alzner-John Carlson, Roman Hamrlik-Mike Green). And Dmitry Orlov is almost certainly destined for that third pairing... once he's healthy (he's been out of Hershey's lineup for a month, injured, ironically at Verizon Center). Jeff Schultz might have the inside track on the sixth spot, but could certainly see John Erskine or Jack Hillen take time from him (we've listed Erskine and Hillen as more or less interchangeable here - if a puck-mover is out, Hillen is likely in; if a stay-at-home slot opens up, it's probably Erskine's). And there's decent depth in Hershey which isn't clearly broken out as left/right (at the NHL level), so they're just "D" on the chart. Finally, someone had to be listed as the number one netminder, so it's the guy who played the last game... but the two are 1A and 1B for now - don't assume either one has been annointed quite yet.

So that's our take on the roster and organizational depth chart that should and hopefully will be at some point. Given the above, if you're Adam Oates, what do your opening night lines, pairings and goaltender look like?