Tom Wilson didn't see much ice in his NHL debut, but when he did get off the bench he seemed to come as advertised.

As is the case with the vast majority of 19 year old kids, Wilson doesn't look like an impact player. Today. His feet were moving constantly, and while he doesn't have the most fluid stride he was constantly in the play and rarely caught out of position. (Of course, part of that has to do with his ice time, but let's not rain on his parade.) The kid showed some talent and a taste for contact. He's not ready for full time prime NHL duty today, but it won't be too long before he is.

Indeed, donning a svelte new red sweater, Tom Wilson was the caboose in team ice time, skating a meager 6:24, though it’s worth noting that all of his minutes came at even strength, and he logged more time at five aside than either of his linemates, Matt Hendricks and Jay Beagle.

But despite the limited time, Wilson made his minutes count, at least in terms of possession proxy. In his six plus minutes, eight Corsi events (shots directed towards a net) occurred, and seven of them for the Capitals (all coming on one shift). The ratio gave Wilson the best CF% (87.5) on the squad. Beagle and Hendricks were both only on the ice for five Corsi events, which illuminates that in the minute or so that Wilson was on the ice without them, the Capitals generated three shots towards Lundqvist.

Here is a timeline of Wilson’s Corsi events, courtesy of Rink commenter BBinLP: 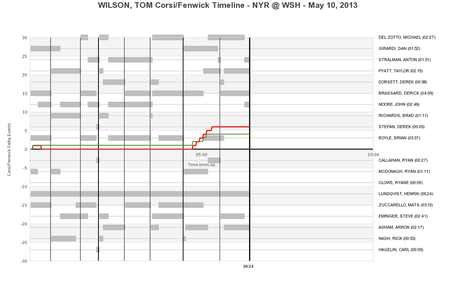 Wilson spent most of his time matched up against Mats Zuccarello, Brian Boyle, and Derick Brassard— which is to say he was out there with the Blueshirts who have provided a spark to the Ranger offense this series. After a year of opening our ears to second-hand tales of Tom Wilson’s accolades in the OHL and hearing that he'd get a sweater for Game 5, Capitals fans were champing at the bit to get their glimpse of the 6’4" nineteen-year-old. They got their first taste just 2:15 into the game. But perhaps even sooner would have been better. Like, right off the bat sooner, because it took all of 53 seconds for that precise Rangers trio mentioned above to hook up for a marker.

Outside possession metrics, perhaps what is most noticeable when looking at Wilson’s stat line is that he was credited with four hits. Hits are, of course, a dubious statistic in that they are tracked exclusively by the home team, and assuming that they have been appropriately credited, they don’t so much represent each team’s physicality (as if so often incorrectly assumed), but rather which team is on the losing side of the puck control.

But the Rangers seemed to never have the puck when Wilson was on the ice, so we can probably make the assumption that the kid came as advertised in that he was seeking contact, not simply happening upon it.

Which, according to Adam Oates during the postgame presser, was exactly what he was told to do.

So in short, Wilson didn’t see much time, but his arrival in the nation’s capital has been much-anticipated, and the kid didn’t disappoint. With Brooks Laich rumored to be near the end of his comeback trail, and with Martin Erat’s injury status still up in the air, who knows what Wilson’s role will be moving forward? Perhaps he’ll be a steady contributor to a deep playoff run. Perhaps he won’t even get a sweater tomorrow, and the next time we see him will be back in the OHL in the fall.

But one things is for certain: regardless of what Wilson did or did not do between the horns, getting to jump over the boards and into a dogpile to the celebrate a playoff overtime winner is a damn fine way to start a career.

Capitals vs. Rangers: Round 1, Game 5