The Rangers got on the board early in Game 5 when they caught the Caps napping. Fortunately, the Caps were able to battle back and win the game. A better start will be crucial to Game 6.

Share All sharing options for: Capitals-Rangers, Game 5: A Tale of Two Goals

It's often said that you win and lose, succeed and fail, as a team. The Caps put that on display last night when, less than a minute into the game, they gave the New York Rangers one of the easier goals they'll score in the playoffs. A quick look at the goal shows that several Caps players could have handled the play better.

The Capitals are in trouble right away as John Erskine is caught in a foot race with Mats Zuccarello. Needless to say, Zuccarello is better equipped for that match-up, and even with an early advantage, Erskine is not going to win this race. 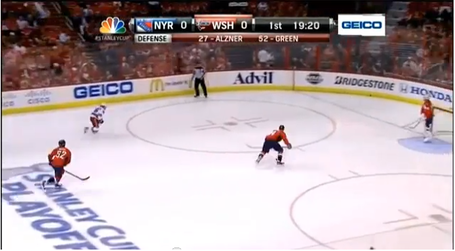 You can see that the only Rangers pressure is on the far side of the ice. Even though Erskine doesn't have much time, he still gets a stick on the puck. The Rangers are making a line change after they dump the puck in, so all the pressure is on the same side of the ice as the puck Instead of reversing the puck behind Braden Holtby, where only Mike Green would be able to get it, Erskine slaps the puck up the boards towards Nick Backstrom, and all of the Rangers pressure. 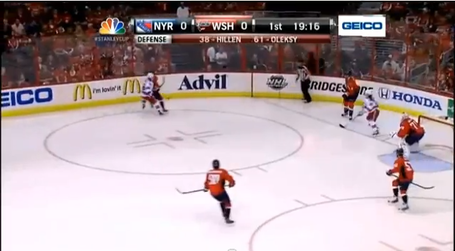 Backstrom has position, but he isn't able to win the battle and the Rangers take possession of the puck. It's a tough spot for Backstrom, but he has to find a way to be stronger on the puck. The Rangers work the puck to their right wing point, and things start to go badly for the Caps. 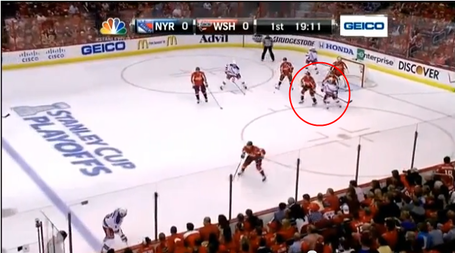 Two Caps (Erskine and Backstrom) are covering one Rangers player (Zuccarello), which is never a great idea. Green has Brian Boyle in front of him and Derick Brassard behind him. The Rangers throw the puck behind the net to Brassard... 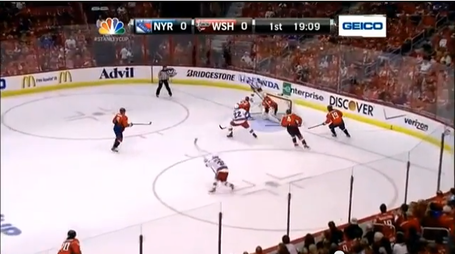 Erskine and Backstrom have both peeled off of covering Zuccarello, but neither of them went towards Boyle. Green commits to Brassard, but doesn't get there quick enough and doesn't get his stick into the passing lane. Boyle gets a wide open shot, and Holtby has no chance unless Boyle puts the puck right into his pads.

Later in the game, the Caps showed the flip side to the coin: winning as a team. After some great chances in overtime, the Capitals finally broke through to score the game winning goal. All five skaters touched the puck, and everybody had to do their job.

Mike Green makes a smart dump to the far half-boards, where Eric Fehr has a chance to make a play. Fehr hustles and gets a stick on the puck, not allowing Anton Stralman to make a clean breakout pass. Mike Ribeiro picks up the loose puck, and makes a slick drop pass to Troy Brouwer, who moves the puck over to Karl Alzner. Alzner passes to Green, who gets his first shot blocked, but manages to stop the clearing attempt after the blocked shot. He returns the favor with a D-to-D pass to Alzner. Alzner finds a way to get the puck through traffic; it may sound easy, but it's a huge key when playing shot blocking teams like the Rangers. Brouwer has crashed the net and has the puck bounce off his skate, right to Ribeiro. Ribeiro had battled for inside position when John Moore went down following blocking Green's shot (maybe opposing players should just stop blocking Green's point shots...), and had an empty net to slam the game winning goal into. Great play all around, and it's always fun to see all five players involved in a goal. Lose as a team, win as a team.

Capitals vs. Rangers: Round 1, Game 5