A look back at the pivotal years that have defined the Washington Capitals, continuing with the 1982-83 season.

Share All sharing options for: Turning Points: The 1982-83 Season

While the NHL and NHLPA engage in an all-out war and withhold hockey from us, there doesn't seem to be much to look forward to... which means it's the perfect time to look back for a bit, to see where the team has come from and perhaps get perspective on where it's going.

Over the course of its thirty-seven year history, the Washington Capitals organization has experienced its fair share of milestones, transitional periods and years that have defined and directed the franchise. New coaches, owners, players and buildings have left their mark on it; successes and failures have served as landmarks for it. With this in mind, we've compiled a list of years judged to be pivotal to the direction of the team and will be exploring them in depth over the coming weeks. So far we've explored 1974-75 and the birth of a new franchise, and the introduction of some new faces who would go on to play huge roles in the team's evolution during the 1981-82 season.

Next up, the Caps survive a turbulent summer en route to their first playoff berth as we delve into the 1982-83 campaign - a huge year for the franchise.

With Bryan Murray in place as head coach and many of the team's young players evolving into stars, the future seemed bright for the Capitals by the summer of 1982. And it got even brighter that June, when General Manager Roger Crozier used the team's fifth overall pick in the NHL Entry Draft to select a young defenseman out of Kitchener, Ontario named Scott Stevens.

But all was not well in Washington.

Rumors had been circulating for months that owner Abe Pollin was looking to move the team... and by the end of the 1981-82 season, with the Caps once again out of the playoffs, it appeared that Pollin had had enough.

"[The Capitals] to date have been the major disappointment and the major failure of my business career." - Abe Pollin (Jane Leavy, Washington Post, 12 November 1981, D1)

On July 21 he went public with his intentions and his demands. Among them was a requirement that the team sell at least 7,500 season tickets and sell out the first ten home games of the 1982-83 campaign; he also demanded that Prince George's County reduce the entertainment tax he paid by 95%, and that the arena bondholders reduce the rent paid by the Caps by two-thirds.

The demands set off an utterly Washingtonian grassroots campaign and lobbying effort to save the Caps. Fans operated phone banks to sell tickets, lobbied local government, and recruited media personalities and businesses to join the cause. The local NBC station held a ticket-selling telethon; the Washington Post, the Special Olympics and eleven other local businesses even chipped in to buy any unsold tickets to the first twelve home games.

In the end three of the four demands were met, with the season ticket goal falling short by 1,900 tickets - but while the "Save the Caps" campaign helped, the team would ultimately stay put thanks to the purchase of a minority stake in the team by a local investment firm headed by Dick Patrick. And it would be Patrick who would help the team take its next step when, on August 30, 1982, he hired David Poile as general manager.

Poile came to Washington with five years of experience as an assistant general manager in the Atlanta/Calgary Flames organization - and was still only thirty-three years old when Patrick and the Caps came calling, making him the youngest general manager in NHL history. If he was intimidated by his new position, however, he certainly didn't show it; just over a week into his tenure Poile constructed a trade with the Montreal Canadiens that would prove pivotal for years to come, sending long-time Caps Ryan Walter and Rick Green to the Habs for Rod Langway, Brian Engblom, Doug Jarvis and Craig Laughlin.

"I would never have accepted this job if I did not believe the Capitals would make the playoffs in 1982-83... The general manager has to be able to do things on instinct. [...] My definition of the GM is the overseeing of the organization. I brought that up with [owner] Abe [Pollin], and he told me that if I can make deals to better the team, he’s not averse to doing anything. As far as I’m concerned, the hockey department is my baby, and I should be able to go ahead."
- David Poile at his introductory press conference (from Behind the Moves: NHL General Managers Tell How Winners are Built)

The puck dropped on the 1982-83 season and the new-look Capitals on October 6, 1982, with the Caps defeating the New York Rangers 5-4 to kick off the season on a high note. But before long it seemed as though this team was destined to go the way of its predecessors, losing back-to-back games to the Flyers en route to a 5-7-3 record through the first fifteen games.

As the season progressed, however, so did the team. They clawed their way back to .500, then set about moving their way up in the division standings. Through thirty games they were 13-9-8 and in third place in the six-team Patrick Division; by January they had inched into second place, continuing to separate themselves from the bottom of the pack until they had extended an almost thirty-point lead over fifth place New Jersey by February of 1983. On February 13 the Caps picked up their 28th win of the season against Winnipeg, a sound 6-1 victory that gave them their highest win total in franchise history - with twenty-two games left to play.

And by the end of the season they had obliterated their previous highwater marks in wins and points, finishing with a record of 39-25-16, 95 points, and most importantly the first playoff berth in franchise history.

The Caps would face the New York Islanders in the first round, a team that, despite having won the last three Stanley Cups, had finished just two points ahead of the Caps in the standings. The best-of-five series opened at Nassau Coliseum on April 6, 1983, with Bobby Gould scoring the first ever Capitals playoff goal en route to a 5-2 loss; one night later it would be Washington's turn to emerge victorious, downing the champs 4-2 for their first postseason victory and heading back home with the series deadlocked at 1.

They'd have to savor that first victory, as it proved to be the only victory for the Caps that spring. They eventually lost the best-of-five series in four games to an Islanders team that would go on to win their fourth consecutive Stanley Cup - but for the team that had been stuck in the basement for almost a decade, it was the beginning of a new era. Starting with that season they would make the playoffs for each of the next fourteen years.

That impressive run began with a pretty talented team that, in the early 80s, featured a handful of future Hall of Famers on the roster. Thanks in large part to new additions Rod Langway and Scott Stevens, the Caps allowed a 5th-lowest 283 goals-against; Stevens, who would go straight from the draft to the NHL, put up 25 points and the second-best plus-minus among Caps defensemen in an impressive rookie campaign, while new captain Langway's work on the blueline earned him his first Norris Trophy win that summer. 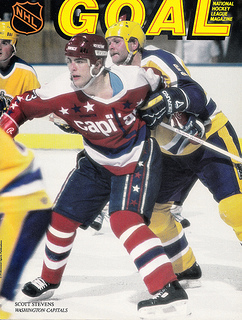 And the offense was just as promising as the reinvigorated blueline. For the first time the Caps posted a positive goal-differential, aided by the continued emergence of stars like Mike Gartner, Bengt Gustafsson and Bobby Carpenter. Goalies Pat Riggin and Al Jensen would split the season in net and in doing so post the franchise's two best GAAs to date, 3.36 and 3.44 respectively.

With those players in place and a milestone achieved, the Caps were now just a few years and a few pieces away from setting franchise records that would last for over two decades.

Next time: A team of true contenders suffers a crushing playoff defeat...

Additional information and research pulled from the following sources:
The Man Who Saved the Capitals (Dave McKenna)
The Hiring of David Poile (Mike Vogel)
Save the Caps