A look back at the pivotal years that have defined the Washington Capitals, continuing with the 1981-82 season.

Share All sharing options for: Turning Points: The 1981-82 Season

While the NHL and NHLPA engage in an all-out war and withhold hockey from us, there doesn't seem to be much to look forward to... which means it's the perfect time to look back for a bit, to see where the team has come from and perhaps get perspective on where it's going.

Over the course of its thirty-seven year history, the Washington Capitals organization has experienced its fair share of milestones, transitional periods and years that have defined and directed the franchise. New coaches, owners, players and buildings have left their mark on it; successes and failures have served as landmarks for it. With this in mind, we've compiled a list of years judged to be pivotal to the direction of the team and will be exploring them in depth over the coming weeks.

After that first season of futility, the Caps would spend the remainder of the 1970s struggling to compete, posting marginal improvements in terms of win totals and offensive production but remaining at the bottom of the division, the conference and the League.

Their fortunes would finally begin to change with the new decade. The 1980-81 squad would post their highest point total to date, a whopping 70 points that still put them in the Patrick Division basement but at least showed an evolution from that eight-win season seven years earlier. And that summer General Manager Max McNab would use the third overall pick to select American high school standout Bobby Carpenter - making Carpenter the first U.S.-born player to be drafted in the first round (just months after becoming the first U.S.-born player to appear on the cover of Sports Illustrated).

Despite any potential optimism surrounding the Caps' improvements and their "Can't Miss Kid", the 1981-82 season got off to a somewhat rocky start. At the helm was Head Coach Gary Green, who had taken over bench boss duties two years earlier and compiled a (relatively) respectful 49-66-29 record since then despite being only 26 at the time of his promotion.The Caps kicked off the season 1-12-0, their lone win coming in the second game of the year - and after an eleven-game losing streak both Green and GM McNab were cut loose.

The move pushed then-assistant GM Roger Crozier into the general manager's spot, and after a single game behind the bench himself (which the team lost 3-1), Crozier made a personnel decision that would impact the next decade of Caps’ hockey: he hired Bryan Murray. 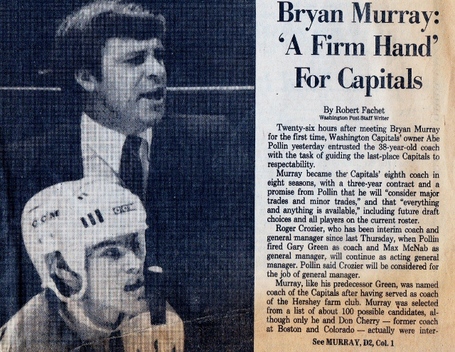 Murray, who was head coach of the Caps' AHL affiliate Hershey Bears at the time, was the players' choice to replace Green and lobbied for the position. His competition for the job included former Bruins' coach Don Cherry; Pollin ultimately went with the untested Murray over Cherry due to Cherry's desire for more control:

"[Cherry] had some conditions I was troubled with, or concerned about. He wanted sort of a Billy Martin-type condition here, where he would be in total control. I was concerned about it, for the Washington Capitals at this time. And told him so."

"I'm a people person. I go with what my heart tells me and what my gut tells me. My gut tells me that Bryan Murray's the guy that's gonna bring the Capitals out of their doldrums." - Abe Pollin (Ken Denlinger, Washington Post, 12 November 1981, D2)

The losing streak that started under Green would end under Murray, the final loss in a 13-game skid coming in Murray's first game against the Penguins on November 11, 1981.

After it ended, the Caps would go on a bit of a tear (particularly by franchise standards), winning seven of their next ten games - 7-1-2 - and outscoring opponents by a two-to-one margin. Of those seven wins, the most memorable would turn out to be a date in late November with the visiting Philadelphia Flyers - a team that had owned the Caps, beating them twenty-six of twenty-eight times to that point (and all fifteen games at the Capital Centre).

This time, however, it was the Caps coming out on top in front of the hometown crowd, bludgeoning the Flyers 10-4 thanks in part to matching hat tricks by Dennis Maruk and Tim Tookey. Also helping the lopsided score along were the eleven man-advantages the Broad Street Bullies gave to the Caps, five of which resulted in Washington goals. 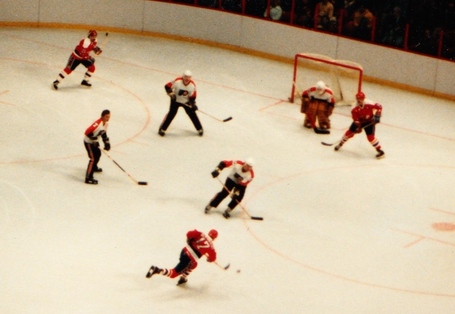 "My midget team could have scored that many goals with all those power plays." - Bobby Clarke (who took 18 of the team's 68 penalty minutes)

It was just one highlight of a season that on the surface looks very similar to those which preceded it but was in fact very different. The Caps would finish the year 26-41-13, with the same number of wins and fewer points than they'd earned the previous year, and were once again out of the playoff picture. After Murray stepped behind the bench, however, they went 25-28-13; the thirteen-game losing streak that started the year wouldn't be replicated during his tenure, and the Caps would lose more than three games in a row just once during the remainder of the season.

Along with the improvement in their record came a notable improvement among both the team's overall offense and its young talent. The 319 goals-for that year would be the most in franchise history to that point, along with the lowest goal-differential at just -19. The team produced three 80+ point-seasons and, after never having more than two in a single season, five players - Maruk, Ryan Walter, Mike Gartner, Chris Valentine and Carpenter - cracked the thirty-goal mark (with Bengt Gustafsson just four goals shy of making it six).

Maruk in particular would record a season for the record books, both on an individual and franchise level, as he went on to score sixty goals to establish a Capitals record that would last until a certain Russian broke it almost three decades later; his 136 point-season still stands as the all-time high for the franchise. He would hit fifty goals once more the following season, but never again would the man affectionately known as "Pee Wee" match his production from the 1981-82 campaign.

Studly offensive production aside, one of the most notable outcomes of the 1981-82 season was the emergence of players who would go on to play big roles in the Caps' successes of the decade. Bobby Carpenter's rookie campaign would also be the first full season for guys like Bobby Gould, Gaetan Duchesne, Lou Franceschetti and goalie Al Jensen - all of whom would form the core group for the 80s squads that would transform a franchise.

"I think we have the players in the organization to make us a contender. I think the Washington Capitals can be in the top 10, 11 or 12 teams. But we will need certain changes or additions to put us in the upper echelon of the league." - Bryan Murray (Robert Fachet, Washington Post, 12 November 1981, D2)

But before that core could be solidified, there was one more draft pick to make - a selection that would not only help catapult the team into the playoffs at last but would also have ramifications for the next three decades.

Next time: A new general manager, a new blue line, and playoffs at last.