From Jim Carey to Alex Semin and Other Trail Tales

A look at how Rick Green, Ryan Walter and Adam Oates contributed to the Capitals long after they were gone.

Share All sharing options for: From Jim Carey to Alex Semin and Other Trail Tales

Last week, we kinda sorta geeked out and ran an updated version of an old post regarding the ongoing legacy of the Caps' first pick in the 1982 Entry Draft, Scott Stevens. Tracing transactional trails in this manner is like a cross between "Where's George?" and the Kevin Bacon game (Bruce Boudreau to Ben Affleck or Charlie Chaplin in three steps, by the way), which is to say it's great fun for people who may or may not know what great fun really is.

But we digress... and provide a couple more asset legacy trees because why not?

First up, let's take a look at what became of a couple of 1970s first rounders, Rick Green and Ryan Walter (click to enlarge): 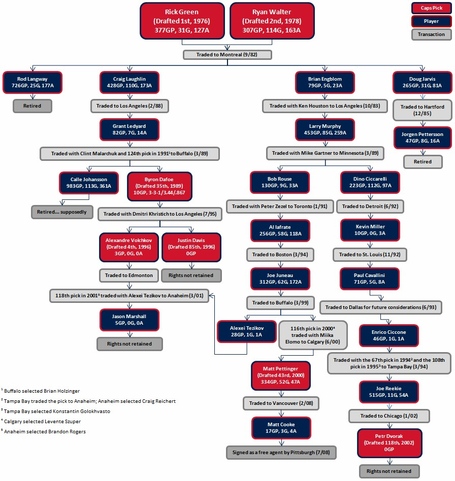 The first thing you notice, of course, is "The Trade" that brought Rod Langway to D.C., which literally was the most essential transaction in team history. But Langway isn't the only big name in this tree. In fact, four future Hall of Fame players (Langway, Larry Murphy, Mike Gartner and Dino Ciccarelli) appear somewhere in the branches. So do three key contributors to the Caps team that went to the Finals in 1998 (Calle Johansson, Joé Juneau and Joe Reekie). But it's not all positive, as two of the worst moves the club has ever made are here - the drafting of Alexandre Volchkov and trade of Ciccarelli for Kevin Miller. Plus, Al Iafrate! And, from a probably-only-interesting-to-me standpoint, after Juneau was traded to Buffalo, the player (Alexei Tezikov) reconnected the Brian Engblom "branch" with the Craig Laughlin branch in a blockbuster (not really) deal for Jason Marshall, while the pick paired with Miika Elomo (a key node in the Stevens tree) in exchange for the pick that became Matt Pettinger. (Sorry, ladies, I'm taken.)

Our second tree centers on one of the top centers in club history, head coach Adam Oates (click to enlarge): 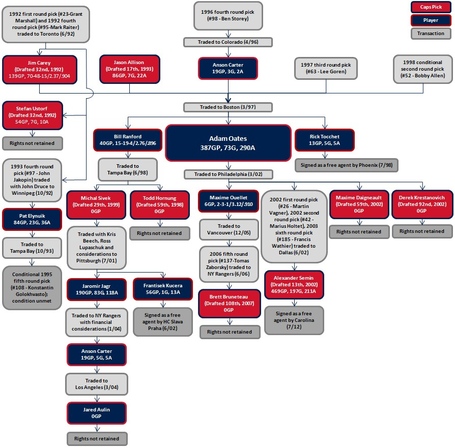 There's an awful lot of fail on that tree, both in picks and players. But the trade that brought Oates to Washington includes one of the great strokes of good fortune in team history, Oates and Alexander Semin... but yeah, not much else to write home about (though Anson Carter appearing twice in the tree is cool, err, "cool"), and letting Semin walk for nothing is less-than-ideal asset management.

Anyway, what's particularly interesting is that each of these trees has completely died out, while the Stevens pick goes on. Regardless, assets have "lives," some longer than others, and the general managers that can extend the utility of a given asset beyond a single player's contributions are likely maximizing the value of those assets.