Scott Stevens: The Most Effective Draft Choice In Caps History

Nearly thirty years after drafting Scott Stevens, the Capitals are still reaping the rewards of the pick (even as fans still feel the pain).

Share All sharing options for: Scott Stevens: The Most Effective Draft Choice In Caps History

When the Caps traded Cody Eakin and a pick for Mike Ribeiro and then drafted Filip Forsberg at the NHL's annual entry draft last summer, they did so using the assets they'd acquired when they'd shipped Semyon Varlamov to Colorado a year earlier. Varlamov himself was selected a few years earlier with a pick the Caps had received from Nashville in return for Brendan Witt, on whom Washington spent a 1993 first-round pick that they'd been awarded as compensation when the St. Louis Blues signed Caps' 1982 first-round pick, Restricted Free Agent Scott Stevens.

Shorter version: two guys on whom the Caps' short- and long-term success depends are residuals from a pick the team made nearly thirty years ago.

Back in December of 2006, Eric Duhatschek had a post over at the Globe and Mail asking (rhetorically), "What was the single most effective draft choice in NHL history?" He asserts that "it was the Atlanta Flames’ decision to select Kent Nilsson in the fourth round, 64th overall, in the 1976 entry draft." Nilsson had a heck of a career of his own, but was eventually traded by the Flames for the picks that became Hall-of-Famer Joe Nieuwendyk (who won a Cup in Calgary and two more elsewhere) and Stephane Matteau (who played nearly 1,000 games in the League, won a Cup in New York, and, as you might have heard, once scored a big goal). Nieuwendyk, in turn, was later traded for a young Jarome Iginla, now a surefire Hall-of-Famer in his own right. Now that's getting some serious mileage out of a single pick.

The question got me to thinking about who was the single most "effective" pick in Capitals history. While the argument could be made that Bobby Carpenter (who eventually begot Kelly Miller and Mike Ridley), a stronger case can be made that it was Stevens.

While Stevens was in D.C. patrolling the blueline (his arrival coinciding with Rod Langway's), the Caps didn't miss the playoffs once and three times topped 100 points in the standings. Stevens averaged .71 points per game for the Caps and is still second on the team in career points by a defenseman (Calle Johansson is first).

Whether or not St. Louis's offer to then-restricted free agent Stevens should have been matched by the Caps is open to debate, but ultimately it wasn't and the Caps received five picks as compensation in return. Two of those picks - Sergei Gonchar and Witt - became mainstays on the Caps' blueline for nearly a decade, and were instrumental in the team's Stanley Cup Finals appearance in 1998. Another - Miika Elomo - was traded along with a fourth round pick to Calgary for the second round pick that became 20-goal-scoring winger (and rather rapid flameout) Matt Pettinger.

Gonchar was traded to Boston during the rebuild of 2003-04, fetching Shaone Morrisonn and first and second round picks in 2004 that turned into Jeff Schultz and Michael Yunkov in return. Between Schultz and Morrisonn, the Caps have gotten more than 750 man-games on the blueline in varying degrees of quality.

Witt was traded to Nashville in the spring of 2006 for Kris Beech and the first round pick that became Varlamov, who, as detailed above, was subsequently sent packing for a couple of picks that helped the Caps acquire two key pieces of their future. And in Varlamov, Schultz and Morrisonn, the Caps had three players on their 2009 and 2010 playoff rosters that date back to a pick made more than a quarter of a century earlier. Not bad.

For you visual learners, it all shakes out like this (click to enlarge, and check out a similar visualization of Craig Simpson's legacy over at NHL Numbers): 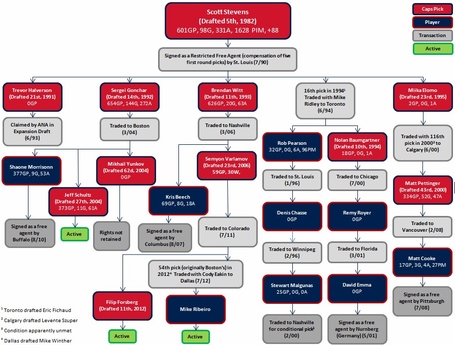 With one pick, the Caps have gotten more than 3,000 man-games, including more than 2,500 on the blueline. Of course, that's of little consolation to fans who would have prefered all 1,868 of Stevens'... especially if they included those three Cups.

Regardless, there's still a lot of upside to be had from that initial pick, and there is no doubt that Scott Stevens is the gift that keeps on giving for the Caps.