The Swedish Machine Never Breaks Either

Share All sharing options for: The Swedish Machine Never Breaks Either 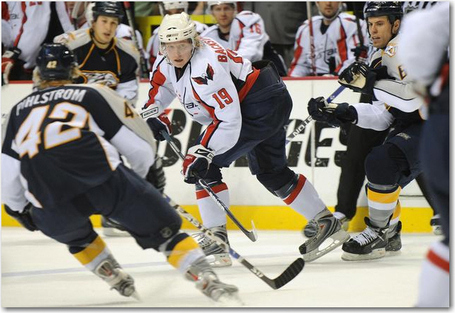 In all of the chatter, both here and elsewhere, over the inconsistent effort of the Capitals while rounding third on the regular season, one player, I submit, can safely remain outside of that conversation.  And that's #19.

In a season which finds some of us, on certain game nights, searching in vain for the presence of a handful of forwards, Nick forges on each time he steps onto the ice.  Other fans like to single out blueliners for a lousy night at the office.  Still others may criticize a poor performance between the pipes.  But I cannot recall one game night in #19's brief NHL career, where Backstrom served as an exhibit of floating, coasting, an unwillingness to "go to the bakery" (to paraphrase and conflate the now-famous Brooks Laich quote), or just plain doggin' it.

Those who cover the team from the perch will tell you the same thing.  One afternoon in January, after a game on the Island, I asked Tarik which player(s) he thought "never took a night off," and he singled out Backstrom.

The barely 21-year-old, who weighed in a shade under 180 lbs. when drafted in 2006, plays with an edge that belies his stature and demeanor.  Being tagged as another lithe and crafty Swede, far from being considered "aggressive," many figured that it would take some time for Nicky to adjust to the abuse dispensed by bigger, more experienced opponents.

How about a month and a half of adjustment.  (Or really just a new coach who believed in his abilities right now.  See also Green, Mike.)  Even from a top 5 overall pick, that's extraordinary.

For any observers who still don't consider Nick to be an aggressive and relentlessly competitive centerman, I suppose that all of continually wresting the puck in the corners from taller and heavier defensemen, absorbing crushing hits in the corner while staying firm as a tripod and with the biscuit on his stick, entering the zone with a powerful stride and his head up, and driving to, and making a tight orbit around, the opponent's crease escapes the definition of aggressiveness.

Recent case in point:  he was at the top of TB netminder Mike McKenna's crease for both of his tallies on Friday night.  And who can forget that scrum in front of the New Jersey net during the dying seconds of regulation in Newark, back on Nov. 15?  If Nick did not wedge himself into the fray, collect the puck, and dish it with surgical precision to a waiting Alex Ovechkin at the opposite edge of the crease, the Caps would not have enjoyed one of the most dramatically-earned points this season.  (Not to mention fans witnessing a top nominee for dogpile celebration of the season.)

Like #8 with respect to the "Russian hockey player" stereotype, Backstrom is, in more subtle fashion, re-defining (as did Peter Forsberg before him) what it means to be a "Swedish hockey player" in the NHL.  (And with that, the hockey world can perhaps draw a little closer toward dispensing with these dubious, if not nefarious, pre-judgments based upon a player's country of origin.)

But before we get further sidetracked, let's come back to the point of this post, which is Nick's remarkable consistency throughout this season.  It's plain to see that the team's top pivot has the second-most points on the squad.  And is the fourth best forward, and top center, on the team in ES +/-.

Not so plain is that he's scored at least a point in 52 of 76 (68%) of his GP this season.  Eight of those "pointless" games took place roughly the first month of the season, when Nicky was playing through an ankle injury sustained in training camp.  And he's been held pointless in only three games since Feb. 7.  (By contrast, Ovechkin, the other Mr. Consistency, has scored points in 56 of 73 GP, or 77%.)  Nicky's also registered a minus rating in only fifteen games all season.

On the PP, he leads all Caps in goals/60 and points/60, the latter by an impressive margin.  And he's starting to hold his own on the PK when called upon.

He's also consistent without regard to his right winger, scoring the same number of points (13) while at ES with Alex Semin or Viktor Kozlov on that wing.

League-wide, he's tied for tenth-best in total points, and he's ranked fourth in assists (just two behind Pavel Datsyuk).  He's also the fifteenth-best center in the league in primary assists / ES60 (1.08) (of those pivots who have at least 20 GP).  He's also pulling the smallest salary of any skater in the top 20 in scoring.  For now.

And speaking of that early ankle injury, Nick's durable, having played in every regular season and playoff game since he made his NHL debut at the beginning of last season.  Brooks Laich is the only other Cap that can claim that ruggedness. Like a crash-tested Volvo blasting out ALPHA 60, the Swedish Machine never breaks either.

However, as much as his career to date has been as brilliant as his flowing blond locks (easily the best hockey hair on the team, if not in the league), there are two elements of his game which could stand improvement.

One is simply his ability to draw penalties (and not commit them).  Last season, he draw 22 ES minor penalties and committed just nine.  This year, he's on the wrong side of that ledger, having drawn just nine and committed 15.

Two is winning more draws.  JP broke down his struggles at the dot in early February and, since then, he's still plagued by a FO% below 50% (47.1) whilst continuing to lead the team in face-offs taken by a large margin.  Assistant coach Dean Evason suggested that if Nick just bears down a little bit more, he'll shore up that crucial element of his game:

[A]lthough Nick can win faceoffs with his skill level, if he can combine that with a tenaciousness in the circle and being real strong plus using his skill level, he's going to be a real good faceoff guy in the years to come.

But no player is perfect.  Heck, if Nick was playing for Les Habitants, they'd already be calling him St. Nick.