Share All sharing options for: Monday Roundup - On Nicklas Backstrom And Faceoffs

"There are so many different areas you can work on with faceoffs, but it comes down to just getting your nose in there and competing and battling to win that puck." - Capitals assistant coach Dean Evason

In Saturday night's 3-1 win over then second-place Florida, Nicklas Backstrom, the Capitals' team leader in faceoffs taken, was once again the busiest Cap in the dot, taking 17 draws (and winning nine, or 53%, of them). Yet only one of those faceoffs was in the defensive zone and just one was in the offensive zone on the power play; Nick's nine neutral zone draws were one shy of the total for the rest of the team. Put another way, Backstrom wasn't taking draws that could lead to instant offense for either team.

Enough things happen during the course of a game - from special teams time to penalties and so on - that sometimes statistical oddities like that are bound to happen. Then again, sometimes those stats are anything but unintentional. And if the Caps were keeping Nick's "impact" draws to a minimum, you could hardly blame them - the Swedish sophomore had won just 38.8% of his faceoffs in the previous three games and just 40.2% since Christmas.

Here's a look at Backstrom's year-to-date (YTD) faceoff winning percentage, along with his percentage over his previous nine games (each nine game segment representing one-sixth of the season so far): 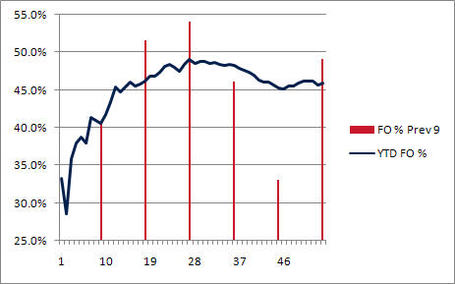 Backstrom rebounded from a weak start to get his win percentage up to a seasonal high-water mark of 49.1% on December 6, but since that date he has won just 42.8% of his draws, an efficiency that would have him in the bottom three in the League among players with enough attempts to qualify. Ouch.

If there's relatively good news to be found in Backstrom's faceoff statistics, it's that he's been best in the offensive zone (48.1% successful), where he has taken the plurality of his draws (42.6%). In the defensive zone, on the other hand, where Nick has taken 21% of his faceoffs, he has been successful just 40.9% of the time, and has won one draw or less in 19 of his last 21 games, a span during which he has won just 23.7% of his defensive zone draws (this makes the decision to use Backstrom as a penalty killer all the more curious).

Alright, that's a lot of data, and not much of it's encouraging, which is why I headed out to Kettler for practice on Saturday morning to talk faceoffs with assistant coach Dean Evason and one of the League's best in the circle, Boyd Gordon.

I asked Evason about what Backstrom needs to do to get better in the dot, and this was his response:

We want him to just to get a little lower and get a little stronger. He's real good on the forehand, at taking sticks, at kicking pucks back. Nick wins key faceoffs at key times, he just needs to get consistency in the faceoff circle. Sergei Fedorov has really helped with him in that department, and he's getting better basically every game.

I'm not sure the stats necessarily bear that last part out, though in fairness Backstrom has won 51% of his faceoffs over the last eight games.

Following up, I gave the coach a chance to compare Backstrom to a few of his teammates, namely Gordon, David Steckel and Brooks Laich, and what that trio does well that Nick isn't doing as well:

Well, when you're an offensive guy, you tend to use your skill level and not worry so much about your competitive level in that area, and although Nick can win faceoffs with his skill level, if he can combine that with a tenaciousness in the circle and being real strong plus using his skill level, he's going to be a real good faceoff guy in the years to come. ...

There are so many different areas you can work on with faceoffs, but it comes down to just getting your nose in there and competing and battling to win that puck.

Gordon, who won just 43% of his draws as a rookie and 46.3% in his second NHL season, attributed a significant portion of Backstrom's struggles to his relative lack of familiarity with the League's other centermen:

A lot of it's just experience. When you first come into the League it's a pretty tough adjustment and you just slowly get better at it, you learn from other guys, you get used to facing off against other guys and get to know their tendencies. We work on it every day, but it's one of those things that comes with experience.

He's still young. I remember when I was 20, 21, there were games when I'd be bad, and it just kind of comes with experience. Nicky's a good player and it'll come along for him.

As we were wrapping up, Evason made one last point:

To be honest with you, a lot of times everybody puts so much emphasis on the centermen to win the faceoffs and a lot of times the guys are so good in this League that the puck sits there and a lot of it comes with your teammates to get in and help you out and battle and although it's an individual stat, a lot of times it's a team stat where everybody can get involved.

If you were looking for an area in which a Matt Bradley might be more valuable than an Alex Ovechkin, this might be it - keep an eye on this next time you watch a game, and you'll see what Evason means.

So all of this leaves us with two big questions: after a decidedly cold run in the faceoff circle, is Backstrom's performance over the last eight games a sign that he has turned the corner, and, if not, at what point do the coaches have to change their game plan and have someone else out there to take draws for their second-year pivot?

A coule of programming notes. First, the Caps/Pens game on February 22 has been moved up from 3:00 to 12:30 so that NBC can show Sidney Crosby the whole country yet again (and in case you're wondering, there is a hoops game at the VC the night before), and second, don't forget that Caps Red Line premieres tonight, if you're into that kind of thing.... Happy 49th Birthday to former Cap Neil Sheehy, a.k.a. The Conducter.... Finally, congrats to Ted Leonsis on the three-year anniversary of "Ted's Take" going public. Time flies, eh?