Share All sharing options for: Boudreau: Russian Players Are More Skillful Than Canadians

Today's edition of Sovetsky Sport had a couple of pieces on Caps' bench boss Bruce Boudreau, starting with this interview. Later, we'll be posting a second article in which Gabby was asked to rate Alexander Semin as a prospect for the Russian Olympic team - you don't want to miss that one.

At the beginning of last season, Washington was playing horribly. In November, the team named Bruce Boudreau - head coach of the Hershey farm team - as their new head coach. After that it was like a Cinderella story. The Capitals made a dramatic turnaround and fought their way into the playoffs, and because of this Boudreau was named the NHL coach of the year. A few days ago your correspondents from Sovetsky Sport caught up with him.

"Mister Boudreau, some Russians would like to see you" - said the Washington press attaché.

Bruce nodded at us and then at the American standing beside of us: "Okay, Jimmy, I'll talk with you first. I can understand you better."

You want to know why Boudreau is often compared to Vladimir Krikunov? It's not only because of the physical similarities, but also because of the spontaneity. Bruce is a master joke teller. For example, after the Atlanta game yesterday, he announced "When Ovechkin is angry, he's like the Hulk. The angrier he gets, the stronger and more energetic he gets."

But when we asked Boudreau about Ovechkin, he just started to wave his hands: "Let's not talk about that guy! How much is enough? I've given ten interviews about him today alone!"

Then let's talk about you. Could you have ever imagined that you would be named the NHL coach of the year?

"Of course not. I simply dreamed about becoming a head coach in the league. I gave myself a target-it had to happen before I was 55-years-old. I was working at the farm club and every day my time was passing by. You could imagine my surprise when I received an invitation to the NHL at 53 years of age. It was an indescribable happiness. I wasn't sure how my ideas would work in the league, but so far everything is working out fine. "

What are the main differences between Russian and Canadian hockey players?

"The Russian players are more skillful. Look at Datsyuk, Semin, Ovechkin, and Frolov. Frolov's game is a lot like Ovechkin's. He really works the corners hard. And take other players, like Grebeshkov for example-- they are all very talented and skillful.

"Ovechkin is also an aggressive, powerful player. The only other Russian player like him is Artyukin. He's big as a monster! At the same time, he's an average forward. With his power, Ovechkin is still the best goal scorer of the league."

Have you taken a look at the work of Tikhonov, Tarasov and other masters of the Soviet school?

"I learn from everyone, because I know that I don't know much. I listen to the players and the coaches, and I read books. Not only books on hockey, but also about philosophy and attitudes on life. Then I add my personality to this wisdom.

"I don't think that I'm like any particular coach. There isn't a prototype. But I consider Roger Nielson as my mentor. I adopted a lot from him-dedication, working with the video, statistical analysis. Later on, when I was hired to work in the lower leagues in Los Angeles, I studied with Andy Murray, an outstanding coach and top-flight organizer.

"Murray and Nielson were never the types to yell at or punish their players. They were examples worthy of imitation. Just now I was working with one of my Washington guys at practice. I simply said to him, 'You really need to work hard for half an hour' instead of roaring at him, 'Alright, now you're gonna run laps, and then a hard skate!' That's not my style.

"John Wooden was an outstanding basketball coach for UCLA . He won, I believe, nine championship titles in a row. You know what he said? 'If I have to constantly yell at a player, then that is not a player who should be on my team.'

"I simply go up to a hockey player and tell him like a man, 'Listen, you need to do this. Go and do it.' If he doesn't do what I asked him, then he doesn't care about it. So what's the use yelling at him?"

Tell us what it was like being in the cult hockey film "Slapshot" with Paul Newman?

"It was fun. They called me to a group meeting and I saw how they made a movie. True, I did end up having to sit with skates on for the entire eight hours. You could die of boredom from that! I just heard 'take one,' 'take two' ... I never thought that the film would become a cult hit in America, but that is exactly what happened."

Wayne Gretzky recently said that he didn't want to coach Team Canada at the 2010 Olympics. So if GM Steve Yzerman offered this job to you?

"Wow! I don't think I'll be asked. But if one more miracle happens, then for me that would be the highest honor! And an enormous pressure. After all, the entire country is rooting for and watching you. I couldn't turn it down. Of course before this happened I'd have to talk with Washington GM George McPhee. But he would agree to it that very same day!" 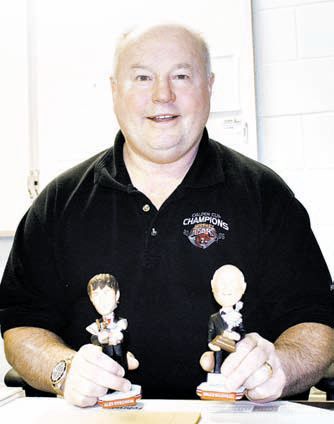