Rink Roundtable: One Quarter Down

The Japers’ Rink crew weighs in on how things look so far for the Caps, and where they’re going in the remainder of the season

Share All sharing options for: Rink Roundtable: One Quarter Down

Question 1: What has been the most surprising aspect of the first 20+ games of the season?

J.P.: The biggest surprise so far is that the Caps are 13-6-2 (good for the League’s fourth-best points percentage as of Monday), despite the power play’s struggles, three total goals from Evgeny Kuznetsov and Andre Burakovsky since opening night (and three more from the entire blueline, none from either John Carlson or Matt Niskanen), possession numbers that have fallen off a bit after a strong start, and Alex Ovechkin as the club’s worst possession forward.

On the plus side, if those aspects of the Caps’ play comes around and starts producing as we’d reasonably expect them to, the team will be in good shape. If not, and that PDO crashes, things could get a little ugly. (And I should note that there are plenty of positives here - the goaltending, Nicklas Backstrom and Marcus Johansson to name a few - but that those things are good is pleasantly unsurprising.)

Peerless: A series of little things that are pleasant surprises. Marcus Johansson has 40 shots on goal in 21 games. That is as many as he had in 34 games in the abbreviated 2012-13 season, and is on a pace to top his career high (138 in 2014-15) in Game 73. And with it comes goals, his nine goals already more than halfway to last year’s total (17) and almost halfway to his career best (20 in 2014-15). There is also Jay Beagle. He has already tied his career best in game-winning goals (two), and he has four goals in 21 games overall. What is surprising in that is that quietly, Beagle has become a better goal scorer than folks might have expected. Over his last three seasons he has 22 goals in 140 games. That’s a 13-goal pace per 82 games, not bad for a third/fourth- (and occasional first-) liner generally getting less than 13 minutes a game. 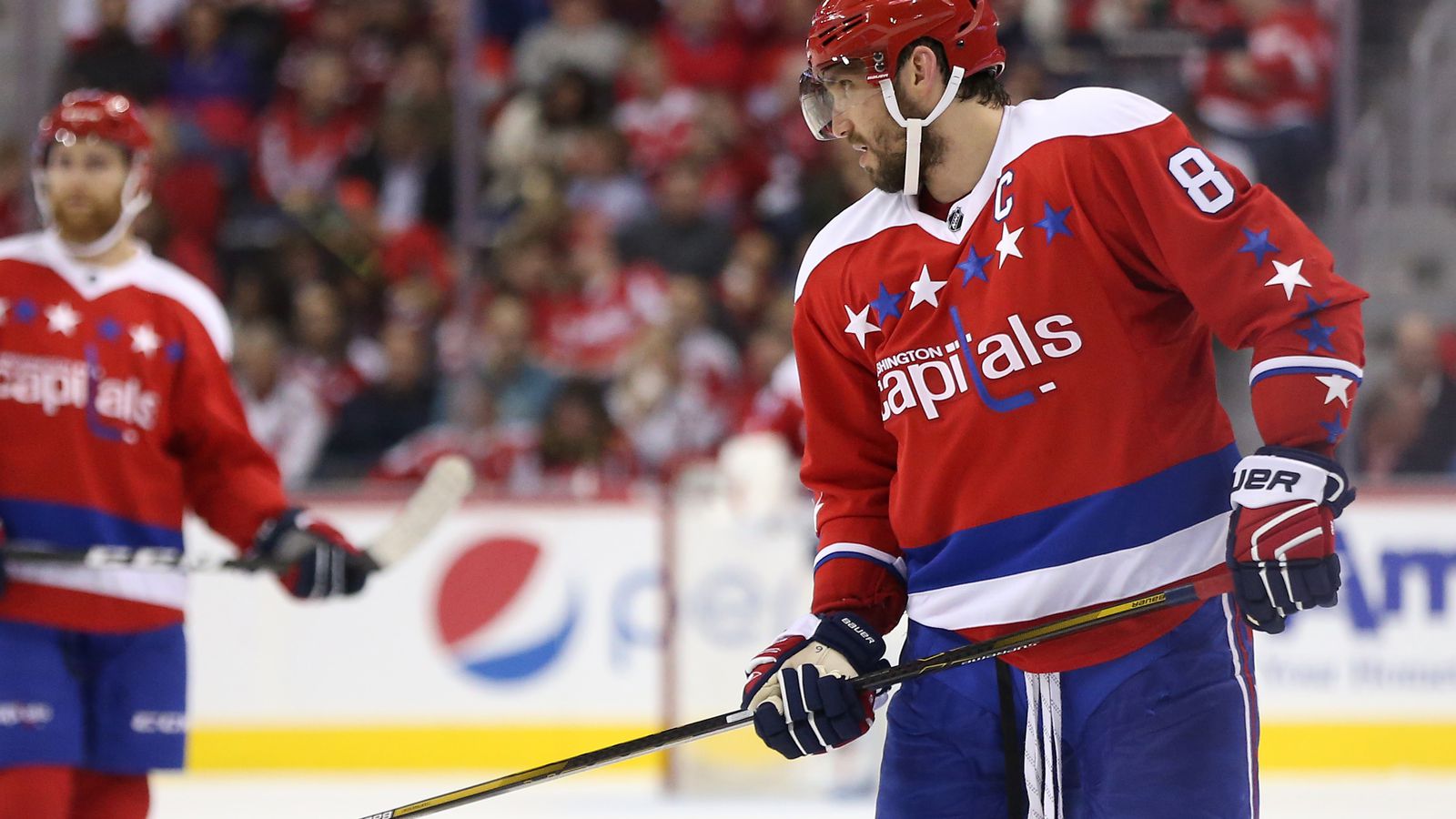 Five stats that might be cause for Capital concerns

On the bad side, the young Europeans. Evgeny Kuznetsov and Andre Burakovsky are a combined 5-14-19, plus-3, in 42 man games. Burakovsky doesn’t have a goal since Opening Night, although he does have eight assists in his last 16 games. Kuznetsov scored his third goal of the season in Game 19, against St. Louis, when last season he had his third goal in the third period of a hat trick game against Edmonton in Game 7. By Game 21 last season, he was 8-16-24, plus-13. That the Caps are doing as well as they are without production from these two qualifies as a surprise in itself.

Adam: I’ve been really impressed/surprised by Brooks Orpik’s play on the third defensive pairing. His contract still isn’t good but he’s clearly not hindering the team in his current on-ice deployment. Rob Parker and I talked about some of the negative surprises of the year on Episode 30 of Japers’ Rink Radio, so you should go listen to that here.

Becca: I’d actually agree with Adam on this - a lot of what has already been mentioned above would stand out as a surprise to me, but perhaps one of the more underrated and undermentioned surprises is the play of Orpik (and the third pair in general, whether Orpik’s partner is Nate Schmidt or Taylor Chorney). Orpik’s not going to wow you with his offensive ability and he’s not even the shutdown defenseman he maybe was at one point, but he’s been much more effective in his new role and has provided a solid partner for someone like Schmidt to jump into the play, as has been his M.O. so far this season.

Rob: I’m surprised the forward ranks are still so jumbled. You can always expect to see some line juggling throughout a season, especially when a coach has as many options as Barry Trotz does currently, but you’d also expect to see at least one go-to line combination. Well, the historic go-to, Backstrom / Ovi / Warm Body, has not been great. We’ve discussed the troubles Nick and Ovi have had together (below 50% possession together on a team that is well above 50% on the whole), but nothing has settled to allow the Caps to mitigate that struggle.

Surely one cause of the juggling has been the struggles of Kuznetsov, Williams, Ovechkin (despite the goals), and Wilson’s continued inability to produce in a way that would justify his climb up the depth chart. The one line that has been great, Johansson / Backstrom / Burakovsky, hasn’t stayed together in large part because Trotz can’t put all his eggs in one basket. So the quest for a stable set of lines continues, and if something finally clicks, look out. As JP noted, even given all that has apparently gone wrong, the Caps are sitting right where they want to be at this point in the season.

30 episodes and counting of our weekly podcast, where Adam Stringham and friends discuss the latest Caps-related news
Catch up on Japers’ Rink Radio

Pepper: Like Adam mentioned, I’ve been most pleasantly surprised by the stability of the D thus far, particularly the third pair and Orlov’s assumption of top-4 duties (the latter averaging a TOI/G in all situations three minutes higher than last season). The Caps are allowing the second-fewest goals against per game at 5v5 in the league to date, a slight improvement over last season if you can believe it. While we’ve noted a “somewhat tilted ice” against the Caps in terms of scoring chances, the early returns exceeded my expectations.

The negative surprise is Kuznetsov’s lack of production, at this stage in his career, given where he was at this point last season and how the drought well preceded the start of the 2016-17 campaign.

Question 2: What is your biggest concern as we head to the halfway point?

J.P.: The Caps look a bit like a team that’s unsure of its identity right now - we haven’t seen much of that “heavy hockey” that characterized the past couple of seasons, but we’re also not seeing the quick-strike transition game we might have expected as self-professed “lessons learned” from last year’s elimination. Moreover, the team’s ability to handle speed (and not just raw speed, but teams that play decidedly up-tempo), is worth keeping an eye on.

With the (huge) caveat that the Caps have played two of their better games this season against everyone’s Platonic ideal of what a “fast” team in today’s NHL looks like, other somewhat similarly speedy teams have given them trouble (the Rangers, Leafs and Oilers, to name a few). Are the Caps going to try to get into track meets with these clubs or try to lean on them? Do they have the personnel for the former, or the tactical edge in the latter?

“Identity” can be overblown and post hoc, but this looks like a team that is more passive and reactive than one that’s interested in dictating play on most nights (which is partially human nature, to be sure), but with the Rangers and Penguins lining up as potential Metro Division roadblocks standing between them and the Conference Finals (and teams like Columbus and Carolina that may be the proverbial objects in the rearview mirror that are closer than they appear), it would behoove them to figure it out sooner rather than later. 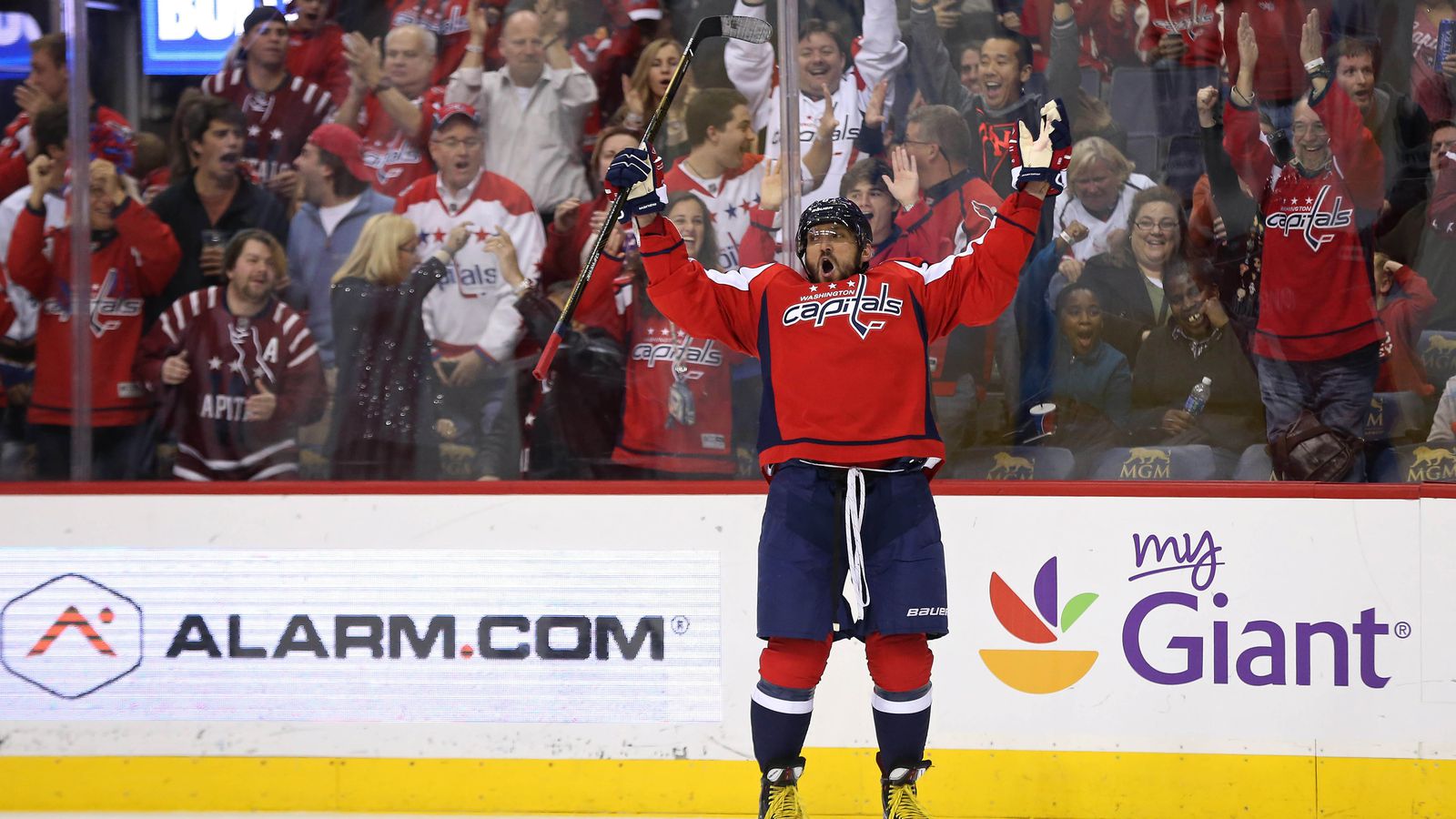 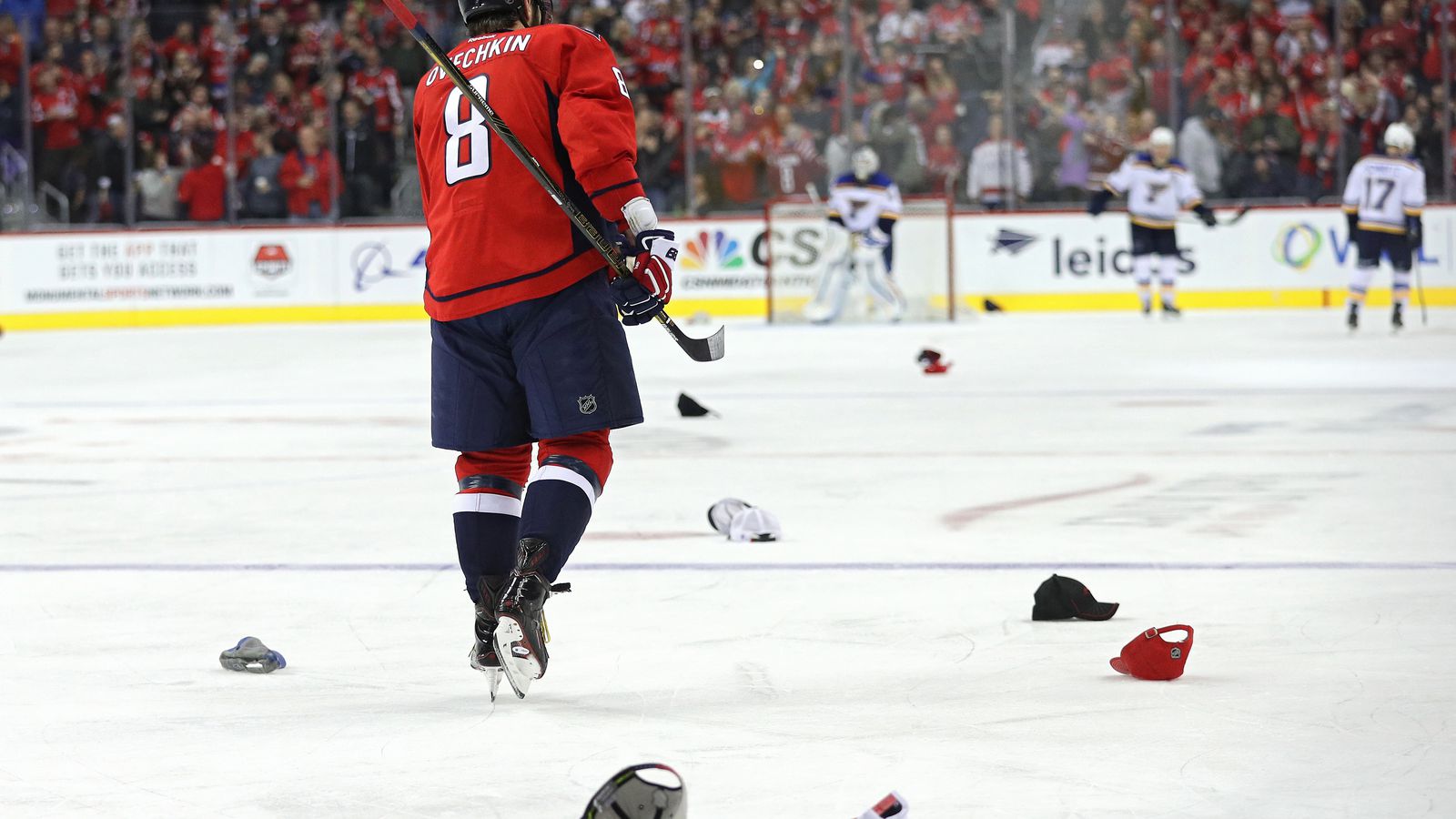 In Part II of our look back through the history of Alex Ovechkin hat tricks, we get a fuller picture of just how special his career has been, and examine some fascinating numbers surrounding his...

Peerless: T-shirts. Specifically, that “will-over-skill” theme.” It is a theme to which I subscribe, the idea being that some nights, skill won’t show up (it happens in every sport), but a player can bring effort to the rink every night. Maybe not quite 100 percent every night over an 82-game season, but something close to it, and that is the key to finding other ways to win when the “skill” part isn’t there.

Right now, I just don’t get the sense that such a level of commitment is there up and down the lineup or on a night-to-night basis. It is as if the Caps are running the Belmont, and they are holding back in the pack, expecting to explode in the last turn and down the stretch to pull away at the finish. I’m not so much concerned that they would miss the playoffs, but rather when they dig deep for that reserve in the stretch and in the postseason, they’ll find it has gone stale.

Adam: Everything J.P said. The process is more important than the results right now and I’m getting more and more concerned about the process after every game. The Capitals need to become a proactive rather than a reactive hockey team.

Rob: The defense concerns me, top to bottom. Look at the top defenseman on the teams that have won Cups in the Ovi era. Niedermayer, Pronger, Lidstrom, Letang, Doughty, Keith, Chara. Aside from that surprise Hurricanes team, every single Cup winner has had a legit Norris-caliber defenseman. You can add guys like McDonagh and Burns to the runner-up list (as well as a bunch of the guys on the winner’s list). The Caps don’t have that guy.

Matt Niskanen has been their best defender, and he’s played very well, but he does not have that kind of dynamic game in all three zones, all phases that the other studs have shown. John Carlson was supposed to become that guy, but even giving some leeway for the injuries, that ship may have sailed.

But there’s more than one way to skin a cat, right? The plan for the Caps in the Brian MacLellan era has been to amass a defensive squad characterized by depth more than top end talent. It looked good at first, but the Caps are down Mike Green (a key piece in the defense-by-depth puzzle), have seen Orpik’s effectiveness steadily decline, the stagnation of Carlson, and a probably-slower-than-they’d-like development from Orlov. The defensive corps started to fall apart pretty quickly last spring with the slightest duress (Orpik’s suspension and then Alzner’s injury - both obviously important players, but neither of them providing anything on the offensive side of the red line), and I don’t see how things are going to be any better this season.

Pepper: I hear Rob and do feel at times that the D has more of a “smoke and mirrors” quality to it than a “sum is greater than its parts” character. On the other hand, the DC faithful, and plenty of hockey observers outside of the Beltway, still marvel at how the Penguins defense as constructed, and particularly depleted in the series against the Caps (including a Letang suspension), managed to outlast a high-octane offense. So I think it can be done with this team’s D as well.

But that said, was it more of the opponent's’ defensive play or the Caps’ offensive attack that led to the early playoff exit? What I’m most concerned about is that, notwithstanding some welcome adjustments to the Captain’s game, this team still focuses too much on point shots, perimeter play, and “pretty goals,” and a few key forwards persist with a pass-first mentality and predominant east-west approach. It has been painful to watch passing on open shots, instead opting for a trickier passing play that bounces or deflects out of danger.