The team should be able to cut down on shots against, but may not be able to improve its save percentage... and that would be okay.

Share All sharing options for: How Many Goals Against Will the Caps Allow in 2014-15?

With the hiring of Barry Trotz and the signings of Brooks Orpik and Matt Niskanen, it looks like the Capitals will go into next season with a renewed focus on defense, a strategy that certainly makes some sense, considering the team ranked in the bottom-10 in the league in goals-against in 2013-14.

On a simplistic level, goals-against is a function of shots-against and save percentage; while the former is largely at the mercy of systems and personnel, the latter is a little (although not much) more predictable, since save percentage is largely driven by goalie talent (and randomness). But they're both critically important components, obviously, and nothing hammers that point home like noting that last season's woeful Capitals team defense that finished 21st in the League in goals-against actually ranked 6th in the NHL in save percentage, ahead of Stanley Cup contenders like St. Louis and San Jose; Washington's big shortcoming was in shots-against, where they ranked 27th. At the rate the 2013-14 Caps gave up shots, they could have had the best save percentage in hockey and not broken into the top-six in the League in goals-against per game. You get the point.

Coaching can alter goalie play in net, and that hurt Washington last year. In early December, Adam Oates and Olie Kolzig mentioned they wanted their goalies to play deeper in their creases. Incumbent starter Braden Holtby, aggressive in net to very good results, did not respond well to the philosophy change, as we can see below: 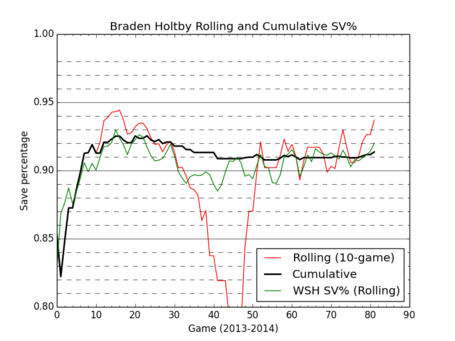 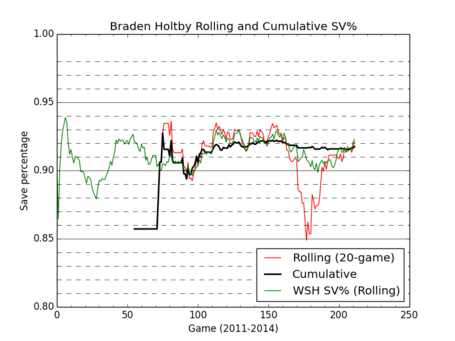 Style changes notwithstanding, Holtby still finished 7th in the NHL in save percentage at 5-on-5 in 2013-14, slightly ahead of Henrik Lundqvist and Jonathan Quick. His rolling 5-on-5 save percentage only dropped to around .900 at worst. What really dragged down Holtby's save percentage was the penalty kill, where he finished the season with a .867, to rank 45th out of 69 goalies (minimum 10 games played).

Since Holtby made the NHL full-time in 2011-12, he hasn't had a worse stretch than in December 2013 and January 2014. The Caps' starter ended up posting a career-low .915 save percentage last season, and although he was able to rebound down the stretch, it was too little, too late to take the team to the playoffs.

Presumably, this season, the team will not try to change its starter's style. But will that lead to an increase in save percentage?

Last season, the Capitals' back-ups were excellent. Michal Neuvirth, Jaroslav Halak, and Philipp Grubauer combined to post a .923 save percentage in 37 starts — one of the top five back-up goaltending marks (at the team level) in the League. Combined with a decent .915 from Holtby, the Caps had the sixth-highest team save percentage in the NHL, as noted above.

It's always tough to improve on near-league-leading marks, and new backup Justin Peters — or, for that matter, any goalie, starter or backup, outside of the elite — will be hard-pressed to replicate the work of Washington's trio of backups from a season ago. Peters did post a .919 in 21 games last year, though, which could be an indicator that he's found a higher level of play. But it could also just be a blip on the radar. Peters sports a career .904 — well below last year's overall average of .914 or average among backups (i.e. goalies who didn't rank in the top-30 in minutes) of .911. In other words, don't let his career .938 save percentage against the Caps mislead you — he doesn't get to face them any more other than in practice.

One factor which may improve the team's save percentage is shot-quality-allowed. The Caps were a mess defensively last year, and better coaching and personnel should help alleviate that to an extent. Shot quality effects, though, tend to be difficult to discern — the best we have is shot location, which regresses 2/3 of the way to the mean year-to-year and is inconsistently tracked around the league — so let's ignore them for now.

On another front, though, we can look at proportion of shots faced on the penalty kill. On average, teams shoot over 12% on the power play but under 9% in other situations, so differences in discipline and penalty kill shots-allowed rates will lead to differences in save percentage. In most situations, the difference will be minimal — but it could be bigger for Washington. The Capitals allowed more shots against per 60 minutes at 4-on-5 than any other team in the Behind the Net (2007 onward) era, surrendering nearly 11% of their total shots while shorthanded — the highest mark in the league. Nashville, meanwhile, ranked in the top five, its usual range, a little under 7.5%.

If Barry Trotz can get the Caps into the top five, he'll increase team save percentage by about .001 — a small difference, but worth two or three goals (or about one standings point) over the course of a season, all else equal.

The types and quality of shots against is not the only way the Caps' new coaching staff can affect its goalies. New goalie guru Mitch Korn has a history of working with successful goalies, including in-his-prime Dominik Hasek in Buffalo, and Tomas Vokoun and Pekka Rinne in Nashville.

To estimate the effect of Korn's coaching, we can look at some examples of how goalies fared with and without him. 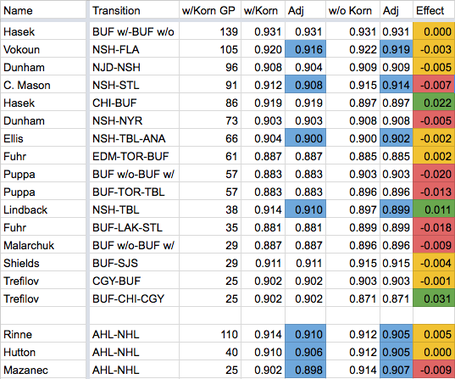 (I applied an adjustment for the numbers highlighted in blue. Nashville is a notorious shot over-counter, so for post-2004 data, I corrected for shot over-counting, using the same correction factor for all years. For Pekka Rinne, Carter Hutton, and Marek Mazanec, I used NHL equivalencies to adjust their respective AHL save percentages. I only considered the 1-2 seasons before and after the change from working with Korn to working without him, or vice versa — we are primarily concerned with near-future changes, after all.)

Perhaps Korn is better with certain styles, or with younger, more raw talent. But it's tough to discern a general effect without going into substantially more detail.

Let's call this a wash.

We can use Marcel forecasting to estimate Holtby and Peters' save percentages this season. The Marcel system projects statistics for the upcoming season by using a weighted average of the statistics in previous seasons. For save percentage, the most recent season is weighted about 40%, and previous years less than that. The system projects Holtby as a .916 goalie and Peters as a .912 (without accounting for aging — which shouldn't be a big factor anyway for a pair of players who will be 25 and 28 on opening night, respectively) for the near future.

Given how Holtby was handled last season, it's probably fair to assume he'll beat the estimate. If he's able to post a .918 in about 55 starts (16th-most for a starter last season), while Peters and any other goalies the Caps may use combine for a .912 over the remainder of the season, that'll give Washington a .916 save percentage — which will likely rank in the top-10, but is a hair worse than the .917 Holtby, Grubauer, Halak, and Neuvirth combined to give Washington last season. If Holtby is able to post a .920 (as he did in the lockout-shortened season, overcoming a poor start), that'll give Washington a .917. Add in the .001 for better discipline, and we get to .918 — which may not quite be elite, but is still very, very good.

The error bounds on these projections are pretty big, which is what happens when you're trying to project a number that's about 2/3 randomness in a given season. Using a binomial model, the standard error on a .918 save percentage is about .006 — meaning that about 2/3 of the time, a "true talent" .918 tandem will end up somewhere between .912 and .924.

Putting it all together, here's how the tandem might fare, depending on how many shots-against per game the team in front of them allows:

Nashville has ranked 11th, 8th, and 20th the last three seasons in shots against per game, which is decent-to-great considering its shot over-counting problem. Even if Trotz only gets the Capitals back to league average in shots against per game, it should be enough to keep the team in the top half of the league in goals-against — an improvement of 20 goals or more (over three wins) per 82 games.

If Washington can combine a top-half defensive performance with a top-half performance offensively — it has ranked 13th and 5th the last two years in goals per game — the improvement in goals against will be just about enough to virtually guarantee a playoff spot in 2015.