Washington Capitals: What to Watch for in the 2014-15 Season

Breaking down the storylines, the key players and some things to keep an eye on as the 2014-15 season gets underway

Share All sharing options for: Washington Capitals: What to Watch for in the 2014-15 Season

It's time at last - after the longest of the long offseasons, the puck drops on the Caps 2014-15 campaign tonight at Verizon Center. And as always, there are an abundance of storylines on which to focus over the course of the next seven or eight months. New players, new systems, new(ish) front office... this season has all the makings of being, if nothing else, an interesting one.

So as we wait for the festivities to kick off another 82 games of glorious Capitals hockey, here's a look at some things you might want to watch.

Here we go again - Tonight will mark the fourth time since 2005-06 that the Caps have started the season with a new coaching staff behind the bench, the fifth new coach overall in the last decade. Each bench boss has had his own theories on what works and what doesn't, what systems will win games and what the role of each player should be - and Barry Trotz is no different. Much has been made of the defensive style he employed during his 15-year tenure in Nashville, with questions of whether he'll be able to adapt that style to a new, more offensive-minded bunch (or vice versa). The Caps are no strangers to new systems, as they tackle their 379th the last few years (give or take), so hopefully the adjustment period will be minimal. In what should be a tough division, and with what could be a slim margin of error to make the playoffs, it'll have to be.

On Defense - In 2013-14, the Caps gave up 229 goals, a rate of 2.79 goals-against per game that was in the bottom-third of the League. They used 14 different defensemen (four of whom made their NHL debut in the process) and three different goalies. Their 51-goal scorer ended the season with one of the League's worst plus-minus ratings. So it's no surprise that a focus in the offseason was on fixing the team's defense, whether it was signing free-agent blueliners Matt Niskanen and Brooks Orpik, or hiring a coach known for stingy systems in Barry Trotz, or bringing in goalie guru Mitch Korn. If all of those things combine to improve the overall defense even a little bit (and if the goal scoring doesn't suffer as a result), the Caps should be able to make a push for - and perhaps make some noise in - the playoffs.

Power to the People - Over the last two seasons, no team has scored more power-play goals than the 112 scored by the Caps; in fact, in the Adam Oates era, power-play goals accounted for close to 30% of the team's total offense. It has been one of the few bright spots in an otherwise frustrating stretch for this team. So the hope is that the team is able to sustain their success across another season (albeit while balancing it out with a bit more production at five-on-five). They've wisely retained the architect of this dominant power play in assistant coach Blaine Forsythe, and pretty much all of the weapons remain in the arsenal - but there are no guarantees in sports, and it'll be interesting to see if the Caps are able to continue producing at or around the same rate going forward.

Shedding the Penguin Suit - The Caps' defense has a strong Pittsburgh influence this season, with not only the additions of Niskanen and Orpik but also the former Penguins' assistant coach, Todd Reirden. And while most of the focus has been on the players added to the squad, don't underestimate the influence of Reirden - Niskanen has frequently talked about how Reirden turned his career around, and he's already earning rave reviews from the Caps' blueliners. After a couple of years of some questionable coaching and a revolving door of rookies and journeymen, it'll be nice to have a defense guided by an experienced hand and buoyed by legitimate NHLers... even if they had to be imported from the Steel City.

The Children are our Future - It's somewhat surreal to think that the guys once referred to as the Young Guns are now the team's veteran leaders, with Alex Ovechkin, Nicklas Backstrom and friends inching towards - or moving into - their 30s. Now the next generation of young prospects and future Caps' stars are taking their place in the lineup, and it's given the Caps a pretty young squad this year. The team has an average age of 27.4 years old, 18th-youngest in the NHL (the League average is a bit older, at 27.8), which means the team will be relying on guys like Evgeny Kuznetsov (22), Tom Wilson (20), and Andre Burakovsky (19) to play potentially key roles this season. Having so much youth in the lineup can be both a blessing and a curse, so it'll be up to Coach Trotz to wrangle his young crew without pushing too much onto them before they're ready.

Go Ahead and Tell Everybody... - Braden Holtby is part of a pretty impressive stable of goalies that the organization has drafted and developed over the years, most of whom have had to share the crease (with each other or with a veteran brought in by the team). This year, however, Holtby has officially been appointed the franchise's #1 goaltender - and taken on all of the pressure and responsibility that goes with it. Not an easy task at any point, let alone coming off of a fairly disappointing season. He's got some help, however, in new goaltending coach Mitch Korn, to say nothing of a much-improved defense in front of him that perhaps won't leave him out to dry quite as often. If he can shake off last season and focus on the style of play that got him here in the first place, he'll be fine - and he'll likely need to do just that if the Caps have any shot at the playoffs.

Capitals on the Hot Seat

A look at who might be feeling the heat this season

Our unique look at the Washington Capitals depth chart

Even Keeled at Even Strength - Perhaps the biggest area of concern last season was the Caps' inability to perform well at even strength, with the team having to rely on their power play (or the occasional heroic performance by their captain) to win games. This year the focus has to be on improving five-on-five - it starts with the top line, which was woefully outplayed at evens last year, but requires buy-in from everyone, from forwards to defensemen. One thing to keep an eye on is the even-strength production from some of the team's secondary scorers, whether it's Jason Chimera and Joel Ward or Brooks Laich and Troy Brouwer.

Green Means Go - This is a big year for Mike Green, as he looks to bounce back from a couple of bad campaigns and return to the lethal weapon the Caps know he can be. Green is in the final season of his most recent three-year deal, and will be an unrestricted free agent for the first time this summer (pending any extensions inked with the Caps during the season) - so yeah, it's a bit of an important season. And a revamped and reloaded blueline could impact his quest to return to form in both positive and negative ways, as more bodies means less pressure to carry the load but also potentially less ice time, in general and on the power play.

Expiration Dates - Green isn't the only one heading into the final year of a contract with the Caps. After an offseason that required just a handful of new deals, Summer 2015 is going to be a challenging one for new GM Brian MacLellan, with a lot of tough decisions to make. Marcus Johansson, Evgeny Kuznetsov, Chris Brown, Nate Schmidt and Braden Holtby are all scheduled to become restricted free agents on July 1; Joel Ward, Eric Fehr, Jay Beagle, Aaron Volpatti, Green, John Erskine and Jack Hillen will be unrestricted. That's a lot of players looking to prove themselves, which is a good thing, but it also means there are a lot of moving parts... and a lot of potential trade targets should the Caps not perform as well as we hope. 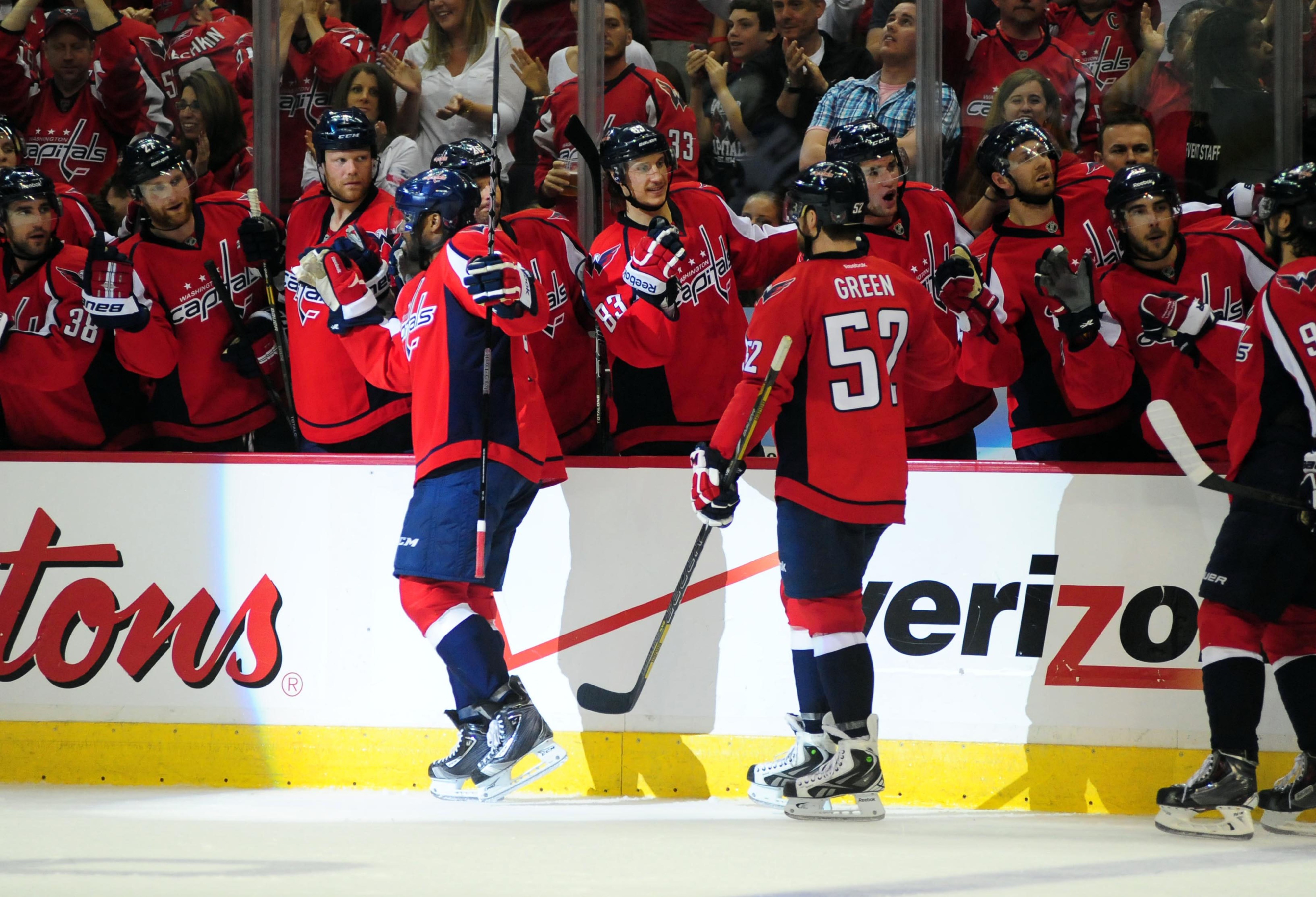 A-Ward Winner - After a couple of underwhelming performances in his first two (regular) seasons with the Caps, Joel Ward broke out big time last year, not only matching but eclipsing the strong years he'd had in Nashville. He set career-highs across the board, established himself as one-half of a wildly successful duo with Jason Chimera and helped carry the team at even strength. So now the question is... can he keep it up? Judging by preseason, he should still be seeing time on the Caps' power play, which will help, but the Caps need him to keep it going in all situations. A minimal dropoff from a career year is to be expected, but "minimal" is the key word here.

A Pivotal Pivot - Raise your hand if, prior to the start of training camp, you had Andre Burakovsky penciled in as your 2C on opening night... put your hands down, you liars. One of the bigger surprises from this year's preseason has been the emergence of Burakovsky as not only a lock for the NHL but the team's answer - for now - to the omnipresent 2C question. That's where he'll start his NHL career tonight, anchoring the Caps' second line between Marcus Johansson and Troy Brouwer. We've seen how he's performed in preseason, rarely looking out of place or over his head despite being a 19-year-old converted winger; now it's time to show that he's capable of continuing that when the games actually matter.

A DC Classic - After years of petitioning the League, the Capitals were finally awarded a Winter Classic; and after months of waiting, the opponent, venue and jerseys were finally unveiled. Now all that's left is to watch it all unfold, first on the as-yet-to-be-named all-access documentary series, then on the big stage on January 1. As most of these guys have been through this before, the added spotlight shouldn't be an issue - but there are some newcomers, both to the situation and to the League, who will be going through it for the first time. Will it be an exciting, welcome addition to their normal routine or will it prove to be a distraction? Will the Caps again make us watch an excruciating losing streak, first in real-time and then again in beautiful high-definition drama, or will they flip the script and go on a run? And most importantly, who comes away with the two points at Nats Park? After what feels like decades of waiting, we're finally just a little over two months away from getting answers.

Push for the Playoffs - Okay, so we can all agree that this whole sitting out the postseason thing is just no fun, right? Sure, it's less stressful to watch the games, and sure, we all maybe needed a break from the Caps after the way last season went... but when the offseason stretches from early April to October, it's time for that break to end and never be repeated. This year the Caps are positioned well to at least make a legitimate push for a spot in the postseason, with an improved defense, a new mentality and an experienced coaching staff at the helm. But will it be enough to fight off the handful of teams who will likely be fighting it out for the final playoff spots? And if is it... can they make some noise?

The quest to get answers, to that and so many other questions, all begins tonight. Buckle up and stay tuned - it's time to drop the puck!