A local columnist proposed that Mike Green be traded -- now. Is it the right prescription for what ails a team sinking in the standings? Perhaps not.

On Friday morning, a column appeared in The Washington Post advocating a trade of Washington Capitals defenseman Mike Green. The argument offered by columnist Mike Wise boils down to this, as described in the fifth paragraph:

"[I]f a seventh straight postseason is the goal, if not wasting a single season of Alex Ovechkin's and Nicklas Backstrom's prime is really paramount - if this season is going to be about more than giving good, young kids experience - then the team committed to going green at goalie and on defense has to seriously consider parting with Green."

Let us say at the start that we think that trading Green might become necessary at some point. The Capitals are in their sixth season with a nucleus of Alex Ovechkin, Nicklas Backstrom, and Green (who is in his ninth season with the club). This nucleus has little success on their resumes where it counts, in the playoffs. In those six seasons the Capitals have appeared in nine playoff series, won three of them, and have not advanced past the second round in any of those years.

We would stipulate further that the Caps have tried a lot of avenues behind the bench to improve on that record. Over those same six seasons the team has employed four different head coaches - Glen Hanlon to start the 2007-2008 season, Bruce Boudreau having replaced Hanlon in November 2007 and serving until he was replaced by Dale Hunter in November 2011. Hunter served the remainder of the 2011-2012 season and was himself replaced by Adam Oates when Hunter decided not to return to the club after that 2011-2012 season. Oates is in his second (and first full) season as Caps head coach.

With so many coaching changes, none of which seems to have worked in terms of lifting the Capitals to elite status as a bona fide Stanley Cup contender, one might reasonably look to shaking up the roster as a remedy. Such an option is given more attention given the recent stretch of poor play and hard luck that resulted in a six-game (and counting, as of Friday morning) winless streak.

This brings us back to Mike Green, and Mike Wise's prescription to trade him. We respectfully disagree that trading him now is a strategy worth pursuing. Let us start with examining the sort of player it is that Wise argues should be traded. It is hard to tell from the descriptions in the column...

One could get whiplash with what reasonably seem to be descriptions of two different people. If one was to distill this description into a scouting report, it might read like this:

"Lacks toughness, makes bad decisions in his own zone, takes too many penalties, dwells on mistakes. A power play specialist, good puck mover, but has been injury-prone. Entering prime-production years but has been overtaken in production on his own squad."

Now, how many general managers might look at that scouting report and conclude that the player in question "can still be a great player in this league?" More to the point, how can one conclude that the player "might still bring the Caps something good in return, maybe even a veteran tough guy, a defensive defenseman for a change?" A sturdy defensive defenseman, a minutes eater (to replace the minutes that Green eats), a "stopper," might be the most precious commodity in the National Hockey League. Is the Mike Green that Wise describes, a skilled but flawed player, an underwhelming defenseman with a marquee name, going to fetch that kind of defenseman in trade? 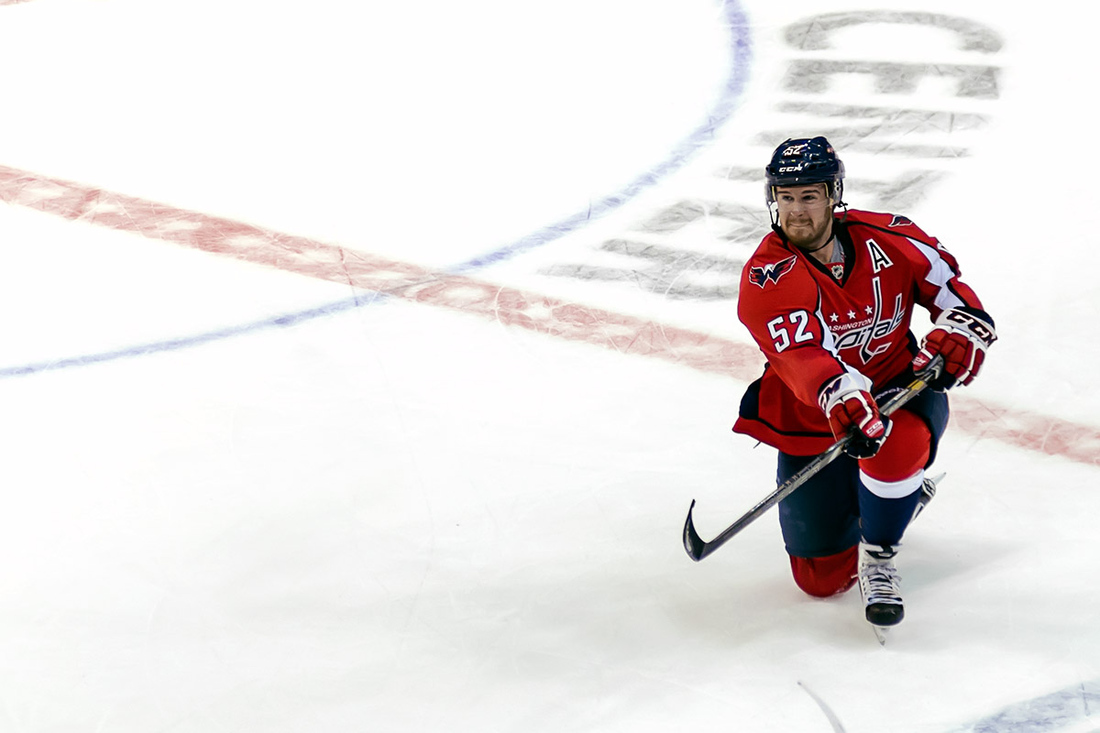 Then there is the context. It is a secret to no one who follows hockey, let alone the Capitals, that the club has a solid top-three on defense. John Carlson, Karl Alzner, and Green form three-fourths of what could be a very good top-four defense. After that, however, things get problematic in a hurry. Through 50 games, none of the other nine defensemen having dressed for the Caps this season has appeared in as many as 35 games. The defenseman with the fourth-most games on the list - Steve Oleksy (33 games this season) - was reassigned to Hershey after clearing waivers earlier this week.

Let's put this another way. Mike Green is a right-handed defenseman playing the right side of the defense. The lefties playing on the other side, and who might be a partner of Green's over the course of the season, include: Karl Alzner, Nate Schmidt, Dmitry Orlov, Alexander Urbom, John Erskine, and Jack Hillen. If you look at his minutes played at 5-on-5 this season, most of Green's time has been spent in partnership with Orlov (305 minutes) and Nate Schmidt (232 minutes). Yes, Green has spent 231 minutes with Alzner, but the point is that more than 60 percent of his five-on-five ice time this season (a total of 868 minutes) has been spent with a pair of youngsters with a combined total of 118 games of NHL experience, neither of whom project as stoppers themselves. Green has spent a lot of time with players who might one day be every-day NHLers, but who are not now what anyone would consider a true top-four defenseman on a team with playoff aspirations.

If anything, Green has covered for partners' shortcomings in an important respect. Let's take a closer look at those two players with whom Green has partnered most at five-on-five this season, Orlov and Schmidt. When paired with Green at full and even strength, Orlov has had a Corsi-for percentage of 57.4 percent (meaning almost 58% of the shots on goal, missed or blocked shots at five-on-five have been taken by the Caps when those two were on the ice together). When apart, Orlov's Corsi-for percentage drops to 45.1. Similarly, when Schmidt was paired with Green his Corsi-for percentage was 53.7, but when apart dropped to 48.3.

Green is also in the midst of a personal evolution as a player. He is not, nor does he seem likely to be, the offensive player he was in 2008-2009 and 2009-2010, when he was a point-per-game defenseman. However, he is perhaps a better possession player than he was then, currently second among Capitals defensemen in both Corsi-for and Fenwick-for percentage. Not coincidentally, the defenseman to whom Green is second-ranked is Orlov, who benefits from being partnered with Green.

This is not to say that Green is without his faults. He is known as a high-risk, high-reward player, and when he makes a mistake - a giveaway when carrying the puck in the neutral zone, a pass he does not receive cleanly at the top of the Capitals' 1-3-1 power play - it almost certainly will result in a scoring chance the other way. However, the manner in which he is used by the Caps puts him on something of an island, not unlike a cornerback in the National Football League, and a mistake here or there is to be expected.

It's also not to say that a trade of some kind might not be in order - but should that happen, Green is probably not the best candidate to go the other way. Even if one assumes that Green could fetch the sort of return Wise envisions, there are a lot of other holes on this team than make a playoff berth a challenge. Swapping Green for a better defensive defenseman addresses none of those holes - a lack of reliable finishers after Alex Ovechkin, the bottom three on defense, lack of stability in the use of goaltenders, poor five-on-five play generally.

There's also the matter of Green's contract. Yes, he has another year on his current deal, but if the Caps should fail to make the playoffs and a front-office housecleaning is performed, one wonders how new management might make use of Green. Perhaps it is that brain trust that could find a key to making Green "fixed and rebuilt as the Norris Trophy candidate he once was."

Trade Mike Green? Perhaps, at some point. There may come a time when such a move is called for, the best move for both player and team.