Since being paired up a month ago, Green and Orlov have seen both their fortunes start to turn for the better.

Share All sharing options for: Mike Green and Dmitry Orlov: A Potent Pair

There's no question that the first few months of the season were rocky ones for Mike Green and Dmitry Orlov, albeit for very different reasons. For Green, the early part of 2013-14 was marked by inconsistency, ineffectiveness and a noticeable dip in his once-frequent offensive production; meanwhile Orlov was caught on an endless round-trip journey between Washington and Hershey, a perpetual call-up still waiting his first NHL game of the season.

On November 30th, Orlov's season debut finally arrived, as he skated alongside John Carlson in the Caps' 3-2 overtime victory against the Islanders; a little over two weeks later, Adam Oates made a crucial decision to switch around his defensive pairs and put Orlov next to Green ahead of the Caps' visit to Philadelphia. And while the game ended in the loss column for the Caps, the pairing stuck - and has been pivotal in turning the season around for both players. 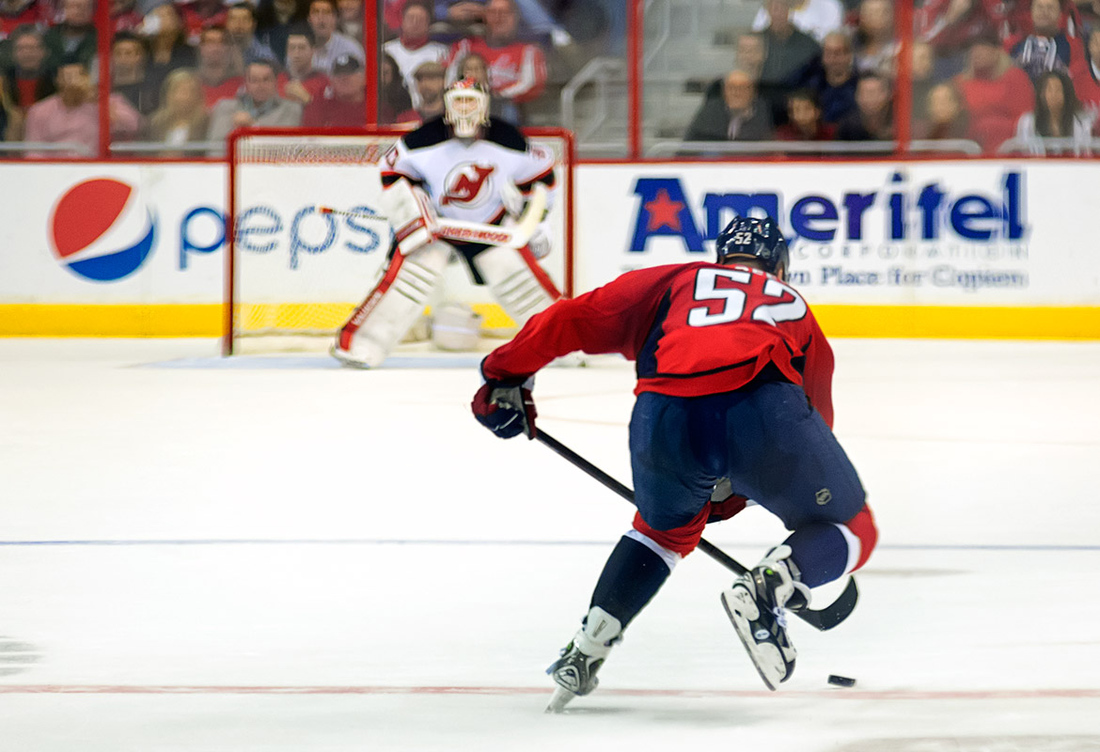 On the surface Orlov and Green wouldn't seem like the most likely of successes as a pair. As both are offensively gifted and both have a knack for jumping into the play, it's a departure from the traditional method of pairing a stay-at-home blueliner with a partner who has a more offensive style (a la John Carlson and Karl Alzner). And yet for some reason, it's been working.

Before joining forces, both Green and Orlov were actually fairly successful in limiting the opponent's shot attempts - or at least keeping the ratio of shot attempts for and against fairly close. In the 30 games prior to December 17, Green was on the ice for 502 Corsi events for the Caps and 484 against, averaging just under 51% in Corsi For % - perfectly respectable numbers (and ones that remind us that perhaps he wasn't as bad as he seemed early on). Orlov's numbers were slightly better, albeit over a smaller sample size of just seven games, at just a shade below 52% CF%.

But it's the games since in which there's been a noticeable turnaround for both players, particularly as they've gotten more comfortable with each other.

In the 13 games since December 17, Green has been on for 261 Corsi events for the Caps and just 216 against - that's 45 more shot attempts taken by the Caps than their opponents when Green has been on the ice, compared to the much smaller discrepancy of 18 more shot attempts for the Caps in the first 30 games. Orlov's numbers have seen a similar boost, jumping from a CF of 94 and CA of 91 in his first seven games to 262 CF and 219 CA since December 17. And after an early adjustment period that saw their CF% dip below 50% in four of the first five games together, they've each been over 50% - and often well over 50% - in seven of their last eight games (Green's dip below the 50% line last night the lone blemish). 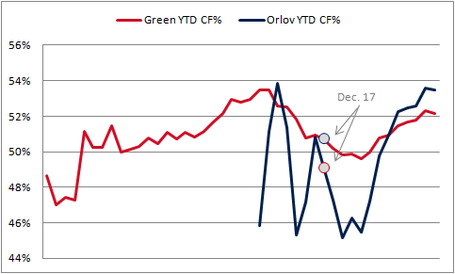 That's a lot of numbers to throw out there, so here it is in simple, beautiful word form: when Orlov and Green are on the ice together at even strength, the Caps are spending a lot more time in the offensive zone than the defensive zone. And that's a good thing.

There have been other changes, particularly where Green is concerned - changes that may not necessarily be directly related to his work with Orlov but changes that are often signs of being more comfortable on the ice (and being less prone to mistakes). Most notably is the fact that Green hasn't taken a single minor since December 17; this after racking up 46 PIMs in his first 30 games (although granted, 18 of those were taken in one memorable outing). Green was also a minus-nine to start the season but has been even over the last 13 games, and both he and Orlov have been plus or even in eight of those 13. And while the offense from #52 still isn't where we're used to seeing it, he's been producing more consistently and with more balance over the last month, with eight points (three goals, five assists) over that thirteen-game span.

It's not a perfect pair, of course. As we noted earlier, this is not the traditional defensive setup and that has cost the team at times - lacking a stay-at-home guy means both players have a tendency to attempt the high-risk plays and perhaps ill-advised pinches, which can mean more odd-man rushes (with often disastrous results). One of the things that usually frees up these offensively-gifted blueliners is the knowledge that they have a safety net alongside them, and right now that's not so much the case. It's made for some exciting moments over the last month, to be sure.

A look at how Dmitry Orlov is doing as a top-four defenseman in this installment of "you ask, we answer."

But the benefit of having these two together is that with the high risk often comes higher reward. Put them out with your top offensive forwards and suddenly the opponent has to focus not only on shutting down the Ovechkins and Backstroms but also the threat from the blue line - both of them. Throw them on the ice with the shutdown line (...the Caps have one of those, right?) and you've got the balance of a grinding trio capable of wearing down the other team's defense with a defensive pair capable of getting a good shot on net for a scoring chance or near the net for rebounds.

More importantly, Green and Orlov seem to play off each other well and make each other better (as evidenced by their WOWY stats). If they're able to sustain this success long-term - and perhaps cut down on the mental mistakes, like Orlov's poor decision last night that led to San Jose's only goal, and the overly-aggressive gaffes both are prone to - it will go a long way toward determining whether the Caps truly have the potent second D pair they've been looking for.