From Alzner to Ward, we're taking a look at and grading the 2013 season for every player who laced 'em up for the Caps for a significant number of games during the campaign, with an eye towards 2013-14. Next up, Michal Neuvirth.

Neuvirth's zone-adjusted five-on-five save percentage for the past four seasons (via Hockey Analysis): 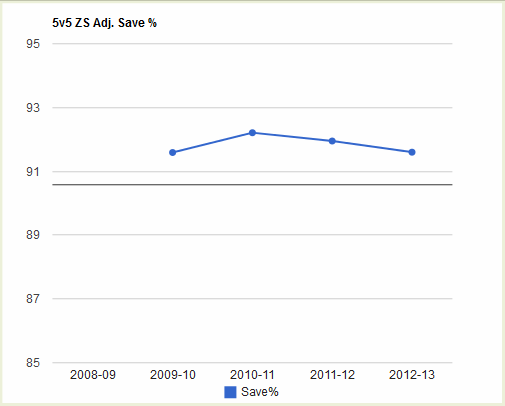 Key Stat: One season after starting 35% of the Caps' regular season games, Neuvirth started just 25%, the lowest total by a Caps primary backup since Brent Johnson started just 23% (19 games) in 2008-09.

Interesting Stat: The Caps scored 1.2 fewer goals per game in Neuvirth's starts than when Braden Holtby got the cage, only scoring as many as three goals in a third of Neuvirth's starts and topping three just once. The Czech netminder was a perfect 4-0-0 when the team gave him at least three goals to work with, but 0-5-2 when they didn't.

The Good: When he was good, Neuvirth was quite good, the team’s second goalkeeper posting a .934 save percentage and 2.00 goals against average in his four wins (oddly, Neuvirth didn't allow fewer than two goals-against in any of his starts in 2013 after allowing one or none in 25 of his 94 career starts prior to this season). Over the course of those four games, Neuvirth only allowed one power-play goal against (in nine chances) shutting the door on Montreal, Carolina, and Buffalo’s extra-man snipers (Tampa's Vincent Lecavalier was the only successful power-play shooter in those opposition losing efforts).

Neuvirth grabbed the starter's job from an ineffective Holtby early on and made five straight January starts before ceding the net back, and after sitting out more than a month from early February through mid-March with an illness and an inability to stop enough pucks, Neuvirth finished very strong, posting a 3-1-1/2.39/.932 line over his last five starts. That run peaked with a stellar appearance in what would be his final game of the season. Despite dropping a 2-1 decision in overtime when he was beaten by then-Ottawa defenseman Sergei Gonchar just 47 seconds into the extra frame. While Neuvirth only secured the Capitals a single standings point, he deserved a better fate in that game, posting a season-high .951 save percentage as he faced a season-high 41 shots against.

His play late in the season and in the years that came before it earned Neuvirth a handsome (and perhaps surprising) contract extension in late April that he'll now have to go out and live up to.

The Bad: Neuvirth's time in net (he started the lowest percentage of Caps games since joining the big club full time in the 2010-2011 season) represented a third-straight year of declining work and 2013 was Neuvirth’s second-straight year of backing up Holtby in the playoffs, Neuvirth’s last second-season appearance a tough Game 4 loss (and exit) to the Tampa Bay Lightning back in 2011. Some of the reasons for the diminished role have been out of Neuvirth's control (i.e. a red-hot Holtby and/or an inability to go), but some have been the result of his own play - prior to missing that month, Neuvirth was 1-4-13.04/.889 on the season, and even with his hot finish, he ended the campaign just 36th in the League in 5-on-5 save percentage among the 53 goalies who played 500 or more minutes (Holtby finished 12th... Semyon Varlamov finished 41st). In fact, since entering the League, Neuvirth is 33rd (of 43) in 5-on-5 save percentage among netminders who have played 5,000 minutes. That's a trend which will have to turn around if Neuvirth wants to be a Number One goalie in the NHL.

Speaking of which, despite his struggles at times, one has to think that Neuvirth is getting tired of playing second fiddle in Washington, as he posted strong numbers three seasons back (48 games played, 27-12-4/2.45/.914), but saw fellow countryman Tomas Vokoun bump him back to the second spot the following summer, the position in which he still finds himself in Washington (with Philipp Grubauer possibly not too far behind). With a cap hit of $2.5 million and steady numbers when given the chance to start in the NHL, 2013-14 will be an important year for Neuvirth, and he'll have to make the most of his opportunities (he should get more than started this past season... but they won't simply be handed to him). As we learned this summer, one won’t stay patient in a reduced role forever.

The Discussion: Does Neuvirth’s declining workload merit taking a look at trade options? Does Washington’s minimal use of the goaltender hurt his value to potential suitors? Signed through the end of the 2015 season does it makes sense to have a $2.5 million #2 netminder? What would he need to do to earn a ‘10’ next year?