As you may have heard, the Caps held the hockey world in suspense for a couple of hours yesterday before announcing that they had acquired winger Martin Erat (and center Michael Latta) from Nashville in exchange for prized prospect Filip Forsberg.

Washington's posture as a buyer at the trade deadline surprised some, and their willingness to move a previously assumed untouchable piece for a veteran added to the collective eyebrow-raising. But as we've done before (and before that), we're here to provide all of the answers to all of the questions over frosty adult beverages. So tell me, Rob, what's your take on the transaction that has everyone talking?

Rob: After a dreadful start to the season, the playoffs (much less the Stanley Cup) seemed like a distant dream. The anticipation around the trade deadline was on whether or not the Caps would move their most valuable player on an expiring contract, Mike Ribeiro. The recent stretch of hot play, combined with a middling division, has the Caps right in the thick of the playoff race, so trading a top scorer like Ribeiro just doesn't make sense. I have no problem with George McPhee standing pat and seeing what the team can do, as they did last year.

But the fact remains, the Caps are on the outside looking in, and have several teams to battle with just to make the playoffs. In this context, the Caps moved one of their two most promising prospects (and the one that's more likely to ever come to North America). I realize that the trade deadline brings out the crazy pills, but I can't recall a team that wasn't in the playoffs (and, really, hasn't looked like a legitimate Cup contender all year) trading a top prospect at the deadline.

I don't see anything about the current team that makes me think giving up anything on the future is a wise move.

Martin Erat is a fine player. He'll bolster the two-way game of whichever line he's on, and he'll chip in some offense. But he's also got a $4.5-million cap hit for the next two years, with Mike Ribeiro still set to go UFA this summer. The Caps have played the "build around the wing and figure out the center" game for years now, and it hasn't worked. Last year I was disappointed when the Caps held on to their valuable UFA-to-be players. Now, that seems like a worlds-better alternative. I don't see anything about the current team that makes me think they were one piece away from contending for the Cup; nothing that makes me think giving up anything on the future is a wise move.

JP: That's all fair, of course (and no disrespect to Michael Latta, but you're getting largely ignored in this post, buddy). But let's look at the bigger picture. For the second time in ten months, McPhee has addressed his team's single most glaring weakness without sacrificing anything off his NHL roster (something that was more or less unheard of in his tenure prior). In less than two years, McPhee has turned a disgruntled Semyon Varlamov (anyone really missing him today?) and Cody Eakin into the second-line center they've needed forever (Mike Ribeiro) and now the top-six winger they've needed since deciding to let Alexander Semin walk last summer (Erat). Sure, it's a "win now" move on a team that doesn't exactly look ready to win now, but considering that there's a big difference between making up a few points and winning the Southeast Division and snagging the three-seed in the East (and facing Ottawa or Toronto) and sneaking into eighth and perhaps being Pittsburgh's sacrificial lamb, they needed to do what they could to help make that push. (And that's not even considering the cash windfall that comes along with playoff appearances.)

For the second time in ten months, McPhee has addressed his team's single most glaring weakness without sacrificing anything off his NHL roster.

Then again, might they be ready to win now? I won't go that far, but I'd note that over the last 25 games, they're 15-9-1 (which would be the seventh-best points percentage in the League if they'd had it from Day 1), scoring 3.20 goals per game (which would be third-best) and allowing 2.52 goals against per outing (which would be eleventh). Are they truly that good a team? Probably not. But adding a top-six winger (along with having gotten Brooks Laich and Mike Green back recently) sure bolsters the case that they might not be as far away as we'd thought - these aren't Dale Hunter's Caps.

Which brings us to Erat. A left-handed shot, he could slide right into a role on the left side of the Nicklas Backstrom-Alex Ovechkin line (despite being predominantly a right-wing, but you know Adam Oates...) and instantly make that line better. Just take a look at a usage chart for this year with him and Marcus Johansson plotted on it: 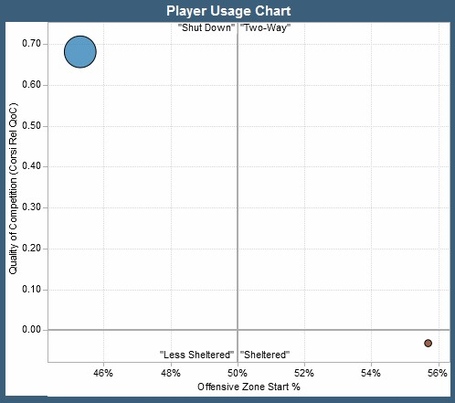 That's Erat in the top left (good possession numbers against tough competition with unfavorable zone starts) and Johansson in the bottom right (poor possession numbers in easier minutes). And it's no fluke - Erat's pretty consistently been a solid puck possessor. He unquestionably instantly makes this a better team in the short-term (this year) and likely over the two years left on his current deal. (And while it remains to be seen whether or not the team can keep Ribeiro in the fold, I can't imagine them making this "win now" deal at the potential expense of their second-line center - none of this happens in a vacuum, we just don't have insight into the whole plan.)

And that, of course, brings us to Forsberg and the long-term. I'm not going to sit here and say that I'm not disappointed to see him go. It's been a little while since the Caps had a prospect with that kind of upside and as close an arrival date. Then again, my disappointment is essentially the product of the hype surrounding Forsberg (some of it legitimate, some of it the echo-chamber of chatroom scouts and prospect deifiers) and not my personal observations. I think we should allow for the possibility that those who are watching him a lot more - the Caps scouts - have soured a little on the guy that fell several spots to them just ten or so months ago. Maybe they see too much perimeter play in his game. Or not enough quickness. Whatever it may be, their insight is keener than mine might be... and it's often spot-on. As Jesse Spector wrote recently while observing the risk associated with acquiring another team's recent first-rounder:

"Nobody knows a team’s prospects better than the team with those prospects. If a general manager is willing to give up on a player whom he could not wait to add to his organization only 36 months or less ago, it is wise to look at the reasons why."

Erat isn't a rental - he's a legitimate top-six piece that should help now and for the next couple of years. To get a guy like that, you have to give something up. And George McPhee did.

Rob: The seeding will help... for one round. If you want to win the Cup, you'll have to go through some good teams regardless. Whether the Caps win the division or win 8th place, the Penguins are looming. You can take a weaker team in the first round, but how many teams have lucked their way to the Cup by getting an easy draw? It doesn't happen. So, sure, if you want to make some money, delay the inevitable, and add another Southeast Division Championship banner to the rafters, sell off some of the future for a guy that is on the wrong side of his prime today. This team is unquestionably better today, I just don't think it's good enough to justify the cost to the future.

There's absolutely no doubt that today, tomorrow, and almost certainly even next year Martin Erat is a better hockey player than Marcus Johansson. There's also no doubt that Marcus Johansson will be a cheaper player, and has much more room for improvement. Teams have rebuilt quickly by bringing in young talent, and there's no reason to think the Caps couldn't have done that after this (to this point) disappointing season. Moving a top prospect means there is only one guy that might qualify as game breaking talent in the system... and he's got a ton of baggage.

It's easy to give the scouting staff the benefit of the doubt simply because they watch more hockey and are pros. But they aren't infallible. The past decade of Capitals first round draft picks is littered with mistakes, as are nearly all teams' draft histories... because even the pros have a tough time identifying the studs. I simply can't accept an argument that boils down to "trust them." Making any trade in the NHL can be a risky proposition, regardless of where the players involved were picked, so if we're going to be giving pros the benefit of the doubt for being pros, I'll go ahead and say that I think these teams have both done their homework on this deal.

And sure, there are scouts that have questioned Forsberg's future production in the NHL, but he's also one of the rare elite talents that starts getting his game nitpicked from a very early age. For every guy that thinks he's a perimeter player, or not quick enough, there are guys that think he was an absolute stud in the WJC (as a relatively young player in the tournament, serving as Captain, and his team's number one offensive threat). Obviously there is some uncertainty to his future, but I don't think being passed over by a few teams in the draft and ten months all of a sudden changes the picture to the point where Forsberg isn't one of the elite players in his draft class. I don't think the Caps got rid of a devalued asset, I think they moved a player that will be very good in a few years for a player that makes them better now. It was a calculated decision, and I don't agree with the math.

I agree on the point about scouting, but you sure do seem wed to a pick made by a group of guys that has littered the Caps' past decade of drafts with mistakes. And of course the Predators have done their due diligence... but if the Caps were willing to move him for an aging veteran and Nashville moved a guy who had asked to be traded for him, you have to allow for the possibility that he isn't quite as highly regarded as he may have been earlier in the season (will he even be the best Forsberg in Predators history?). McPhee has held onto plenty of prospects too long, but decided to cash this one in early. Like you said, a calculated decision, and for today and at least the next few hundred, the math probably works in his favor. But enough of this - let's grab another round...