The Carolina Hurricanes barely had finished off the New Jersey Devils by scoring two goals in the final 1:20 of Game 7 of their series to determine the second-round matchups when [Sidney] Crosby started texting teammates, "Good ... We get the Capitals." - Pittsburgh Post-Gazette (h/t b.orr4)

Putting aside the various interpretations one could assign to the above quote (and you can be sure that if a certain other superstar playing in this series had sent a similar text and later made the media aware of it, "disrespecting his opponent... again" would only be the only interpretation making the rounds), if Sid wants the Capitals, it would be the courteous and appropriate thing to do for the Capitals to oblige him.

Through three games, however, "the Capitals" have not shown up en masse, and certainly not for sixty minutes at a time. The Penguins have had the territorial and possessory advantage, have outshot the Caps by a wide margin and have outhit them.

Now would be the perfect time for "the Capitals" to show up to take a commanding 3-1 lead in the series heading back home, but to do that they'll have to play with a sense of desperation, something they were sorely lacking for 58 minutes on Wednesday night, and something that can't be faked.

It's no secret that these Caps respond well to being backed into a corner. As we wrote before Game 3 of the Rangers series:

Since Bruce Boudreau took over behind the Caps bench some 17 months ago, his team has often been at its best when it has needed to be, be it an 11-0-1 run to make the playoffs on the last day of the 2007-08 season or forcing a Game 7 after falling behind 3-1 in the series to the Flyers a year ago. Right now, they need to be at their best - and there's every reason to expect that they will be.

Now, of course, we can add coming back from 0-2 and 1-3 deficits to win that series to this evidentiary list.

But where's the desperation with a 2-0, now 2-1 lead? This team is experiencing playoff success within a series for the first time since having a 1-0 lead on Philadelphia in the first round last spring, and frankly, they look like they don't know what to do with it.

You think this is success? Wrong. The League refuses to afford any protection to the team's rookie goalie, the officiating is one-sided, television networks are broadcasting your game plans, and the injuries are piling up.

Put another way for you visual learners: 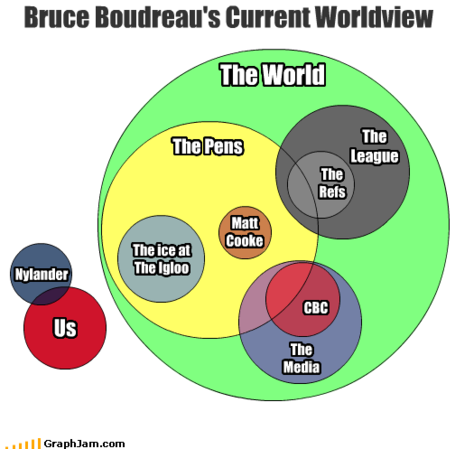 This is not success. This is a challenge. This is motivation. This is the Caps against the world. This... is desperation.

Leading up to Game 5 of the Rangers series, with the Caps down 3-1, we talked about having faith, but we also noted that we have a hell of a lot more than that to go on, and that still holds true. Now we have a team with its back against the wall - even up two-games-to-one - and it's them against the world... just like it ought to be.