After a game like Saturday's and with the revolving door to the injured reserve starting to smoke from spinning so fast, it's hard to get a handle on exactly how good the Washington Capitals are right now, but that doesn't stop us from trying.

In the past, I've used a pretty simple formula to rank teams (very roughly, I might add), and comparing that ranking to a list of teams ranked by points percentage, I feel you can get a decent handle on which teams are overachieving relative to their play and which teams are underachieving. What I mean by that is that a team that is exceptional five-on-five and good on both special teams should have a pretty good record. If not, they're underachieving. By the same token, a team that is lousy on special teams and bad five-on-five but somehow has managed a .500 record is overavchieving. In both cases, the likelihood of a regression to their expected points percentage would be likely, all else equal.

Jumping right into it, we'll ranks the 30 teams in five-on-five ratio, power play percentage and penalty kill percentage, add 'em up, and spit out a cumulative ranking (I think Peerless has used something similar in the past, but I'm not positive). That ranking after the jump.

Good, you made it. Here are those rankings I was talking about, through Saturday:

Surprised to see the 'Canes that low? Me too. But how highly ranked can a team really be if they're ranked 20th or worst 5-on-5, on the PP and on the PK? In what facet of the game, pray tell, are they even average? Based upon their rankings in those three categories, they really have no business taking home more than half the points that have been available to them, and yet they have. Not surprisingly, they're near the top of the list, then, of teams which have overachieved (relative to their play) so far: 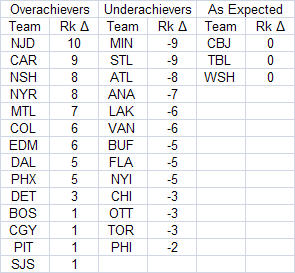 Heading into Sunday's action, the Minnesota Wild had the seventh-best power-play in the League, the second-best penalty kill and were bad five-on-five. The 'Canes were slightly better five-on-five than the Wild, but atrocious on the special teams, and yet Carolina, at 15-13-4 had one more point than Minny (16-14-2). Is there much question, however, which is the "better" team?

Granted, there are differences in strength of schedule, home/road splits, number of power play and penalty kill opportunities, etc., and 5-on-5 ratio should probably be weighted a little bit (since roughly two-thirds of all goals are scored at five aside), but it certainly seems as if certain teams are lucky to be where they are in the standings based on how they've played so far, and others probably deserve a better fate than they've thus far received.

As far as the Caps go, you've noticed that they're ranked ninth in these power rankings and were ninth in the League in points percentage. With all the adversity this team has faced, it's right where you'd expect it to be given how it has played in each facet of the game and on the whole - good, with plenty of room for improvement.