The Consistency Of Brent Johnson

Share All sharing options for: The Consistency Of Brent Johnson

With last night's win, Brent Johnson is now 15-6-3 with a 2.31 goals against average and .923 save percentage in 25 starts under Bruce Boudreau. Granted, there are five goalies who have started more games this season alone than Johnson has in his year-plus span, but what is perhaps most remarkable about Johnny's run has been his consistency.

We touched on it the other day - only twice has Johnson surrendered more than three goals in a start since Gabby took over. Here's what that sort of dependability looks like graphically: 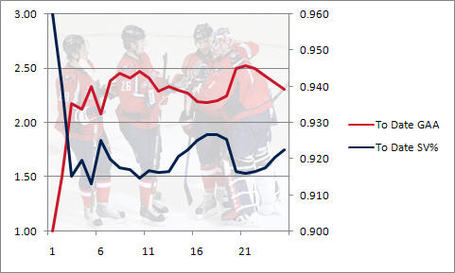 For almost the entirety of Boudreau's tenure, and despite an inconsistent workload and an ever-changing group of defensemen in front of him, Johnson's GAA has been below 2.50 and his save percentage above .915.

It must be nice for a coach and his team to know what to expect from their goaltender on a nightly basis, no?